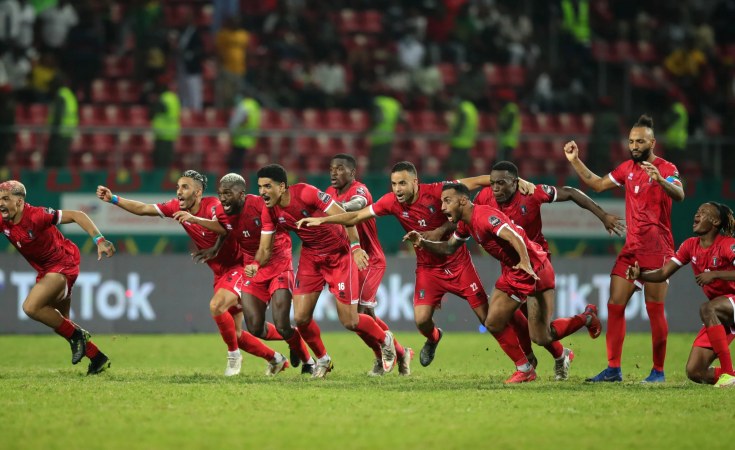 It's quite rare for one of the central tenets of Christian evangelism to entwine with the Africa Cup of Nations. But at the end of nearly three hours of toil, sweat and matyrdom, they fuse: Jesus saves.

Not, on this occasion, the Christ child but the boy Owono.

The block brought joy to the Equatorial Guinea side and msiery to Malians.

"It's historic for us to get this far and it comes after excellent work by my players," beamed Equatorial Guinea coach Juan Micha

At 61 places beneath Mali in the Fifa rankings, Equatorial Guinea had upset the odds and progressed to the last eight at the Cup of Nations for the first time since 2015 when they hosted the event.

Back then it was a 16-team affair split into four pools of four and the top two from each group advanced to the last eight.

The expansion to 24 sides in Egypt in 2019 brought the configuration of six groups of four with the top two advancing to the round of 16.

Four of the best third-placed teams also moved into the knockout stages.

Equatorial Guinea, drawn with defending champions Algeria as well as Cote D'Ivoire and Sierra Leone in Group E, were expected to scramble along this route into the second phase.

But they finished second behind the Ivorians after beating Algeria and Sierra Leone.

Equatorial Guinea will again have to deploy doggedness to destroy Senegal's title aspirations.

Aliou Cissé's men boast the accolade of Africa's top-ranked team and the 2019 beaten finalists are into the last eight for the third consecutive tournament after a laboured 2-0 win over Cape Verde.

Their encounter on Sunday evening will take place at the Ahmadou Ahidjo Stadium in Yaounde after the Confederation of African Football - which organises the tournament - deemed the pitch unsuitable at the Stade Japoma in Douala.

The semi-final slated for Douala has also been switched to Yaoundé.

However, Cameroon's quarter-final against Gambia in Douala on Saturday afternoon will go ahead.

The hosts will be the favourites against a team appearing for the first time at the tournament.

"We're grateful to the players for putting up such a strong fight. The whole country from the president right down appreciate what the players have done.

"As debutants there were doubts about Gambia's ability to go past the group stages and here we are in the quarter-finals.

We encourage the boys to keep up the fight."

Gambia - the lowest ranked nation at the tournament - could profit from the extra weight bearing down on the Cameroon team since the Olembé Stadium tragedy.

But the disaster could also galvanise a squad eager to pay homage to fans who became victims of their yearning to see their footballing heroes.

After that clash in Douala, Burkina Faso face Tunisia in the northern city of Garoua.

The north Africans were depleted by Covid related absences before their last-16 clash. But they rallied to see off a Nigeria side who appeared hamstrung by their burgeoning status as title contenders.

"It was a tough game against Nigeria but we can't think we're done," said Tunisia striker Issam Jebali. "There will be another hard game to come."

That will probably be in the semi-final. Burkina Faso have battled valiantly but Tunisia were savvy against the vaunted Nigerians and should possess sufficient nous to dispatch a hearty but limited outfit.

By contrast, a battle royal looms on Sunday afternoon between Egypt and Morocco led respectively by veteran coaches Carlos Queiroz and Valil Halilhodzic.

The Moroccans dominated Group C and in the last-16 showed character and resilience to come from behind to beat Malawi 2-1.

The Egyptians could hardly be called the Phlaraohs. They edged past Guineau Bissau and Sudan 1-0 after losing to Nigeria in their opening game in the pool stages. A penalty shoot-out after a 0-0 draw took them past Cote D'Ivoire to set up the clash.

Lads, an outstanding team performance, rewarded with a deserved win. I can't be more proud of you. Now another game ahead, with another challenge for us to grow up and be better and better. #EFA #AFCON2021 -- Carlos Queiroz (@Carlos_Queiroz) January 26, 2022

The game also highlighted Mo Salah's unselfishness. On three occasions, the Liverpool striker slinked his way past defenders to set up teammates in excellent scoring positions only for the shot to go sailing over, wide or into the arms of the goalkeeper.

Morocco possess the forwards and a team ethic under Halilhodzic to punish such imprecision.