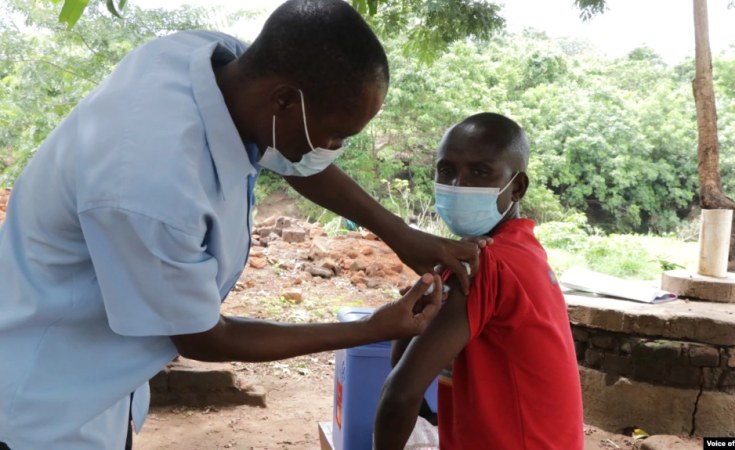 Lameck Masina / VOA
A villager is vaccinated at a mobile clinic in Pasani Village in Blantyre.
UN News Service

The COVID-19 vaccination rate in Africa needs to increase six-fold for the continent to meet the 70 per cent target set for the middle of this year, the World Health Organization (WHO) said on Thursday.

Although vaccine supplies have risen significantly, the continent is struggling to expand rollout, with only 11 per cent of the population fully vaccinated.

"The world has finally heard our calls. Africa is now accessing the vaccines it has demanded for far too long. This is a dose of hope for this year," said the WHO Regional Director for Africa, Dr. Matshidiso Moeti.

In January alone, 96 million doses were shipped to Africa, which is more than double that of six months ago. But now the spotlight is on the need to rapidly ramp up vaccine rollout.

Currently, six million people are vaccinated on average every week, and this number needs to increase to 36 million, to reach the 70 per cent target.

Together with UNICEF, the International Federation of Red Cross and Red Crescent Societies (IFRC), and other partners, WHO is now launching a new initiative to try and resolve bottlenecks.

The partners are scaling up efforts to overcome hurdles, improve coordination and speed up vaccination drives. They have also called for vaccines to be administered as quickly as possible to avoid vaccines expiring.

Through the partnership, technical experts are being deployed to 20 countries to offer support for three to six months and in some cases up to a year.

So far, only Mauritius and Seychelles have met the 70 per cent target. Seven other countries have vaccinated around 40 per cent of their population.

According to Mohamed Fall, UNICEF's Regional Director for Eastern & Southern Africa, the agency "is at the forefront of the largest, mostsophisticated ground operation inthe history of immunization."

"And it will take a response of the same magnitude to turn vaccines into vaccinations,"he said, urging richer countries to fund more operational costs.

According to WHO's data from 40 countries, there is a $1.29 billion gap in funding just to keep up with costs.

The continent is now emerging from its fourth pandemic wave overall, driven by the Omicron variant, which has been reported in 37 countries.

Cases have declined for the third straight week. Over the past seven days, cases dropped by 15 per cent, while deaths fell slightly, by five per cent.

Despite the overall decline in deaths, North Africa reported a 25 per cent rise.