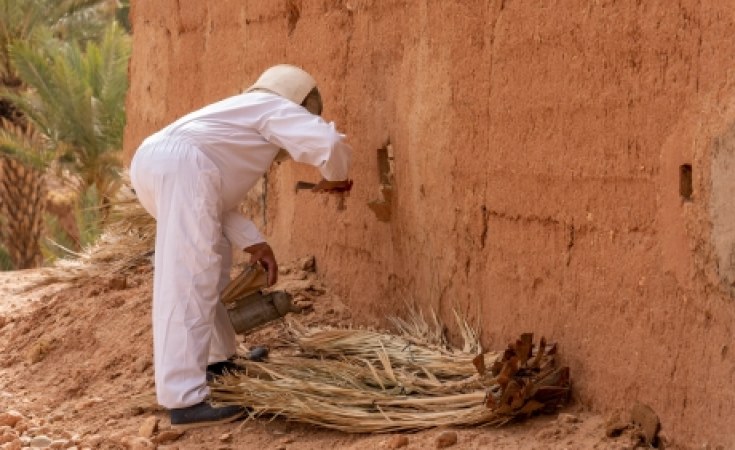 Hassan Chabbi/FAO
FAO, the government of Morocco and other partners have created a beekeeping technical center, whose mission is to improve beekeeping skills and to select, multiply and disseminate queen bees to safeguard the future of the Saharan yellow bee breed.
Maghreb Arabe Presse (Rabat)

Rabat — The Head of Government, Aziz Akhannouch, chaired, Thursday in Rabat, a meeting on the emergency measures needed to cope with the effects of rainfall deficit.

In accordance with the High Royal Instructions relating to the taking of the necessary measures to face the effects of the rainfall deficit on the agricultural sector, and the particular solicitude of HM King Mohammed VI for the population of the rural world and all the components of the agricultural sector, the government has elaborated an exceptional program aiming at mitigating the effects of the delay of the precipitations and at alleviating their impact on the agricultural activity, by bringing assistance to the concerned farmers and stockbreeders, said a statement by the Department of the Head of the Government.

The program is based on three main aspects: the first relates to the protection of animal and plant capital and management of water scarcity, the second concerns agricultural insurance and the third provides for the alleviation of financial burdens on farmers and professionals, the statement added.

The Hassan II Fund for Economic and Social Development will contribute, on High Royal Instructions, by an amount of 3 billion dirhams to this program, according to the same source.

The action program of the first aspect, worth 3 billion dirhams, focuses on the distribution of 7 million quintals of subsidized barley to the benefit of farmers and 400,000 tons of compound feed to the benefit of dairy farmers, to mitigate the impact of rising feed prices and declining availability of fodder, for a total cost of MAD 2.1 billion, as well as the vaccination and treatment of 27 million head of sheep and goats, 200,000 head of camels and the treatment of bees against Varroa, for a budget of 300 million dirhams.

It also includes the rehabilitation of small and medium hydraulic perimeters for the maintenance of equipment and the creation of employment opportunities through the development and upgrading of pipes and Khettara, for a budget of 255 million dirhams, watering livestock through the development and equipment of water points, the purchase of cisterns and tankers and the development of paths over an area of 10,000 hectares, for a sum of 224 million dirhams, and supplemental irrigation for the sustainability of newly planted orchards (2 to 5 years), developed within the framework of solidarity agriculture over an area of 55,000 hectares, for an overall budget of MAD 121 million.

Regarding the second aspect of the program, relating to the multi-risk insurance of the current agricultural campaign, it will be proceeded to the acceleration of the implementation of the drought insurance for farmers, for a capital insured by farmers reaching MAD 1.12 billion on an area of 1 million hectares.

The third aspect, which concerns the alleviation of financial burdens of farmers and professionals for a total cost of MAD 6 billion, aims to reschedule the debt of farmers, financing operations to supply the national market in wheat and livestock feed, in addition to financing innovative investments in irrigation.

In addition, the Head of Government called, at the end of the meeting, on the various stakeholders to coordinate their actions and focus on a policy of listening and closeness to citizens and farmers, for optimal implementation, in partnership with local authorities, of this Royal program.

The Moroccan Beekeepers' Mission to Preserve the Saharan Yellow Bee

Previous Story
Tagged:
Copyright © 2022 Maghreb Arabe Presse. All rights reserved. Distributed by AllAfrica Global Media (allAfrica.com). To contact the copyright holder directly for corrections — or for permission to republish or make other authorized use of this material, click here.