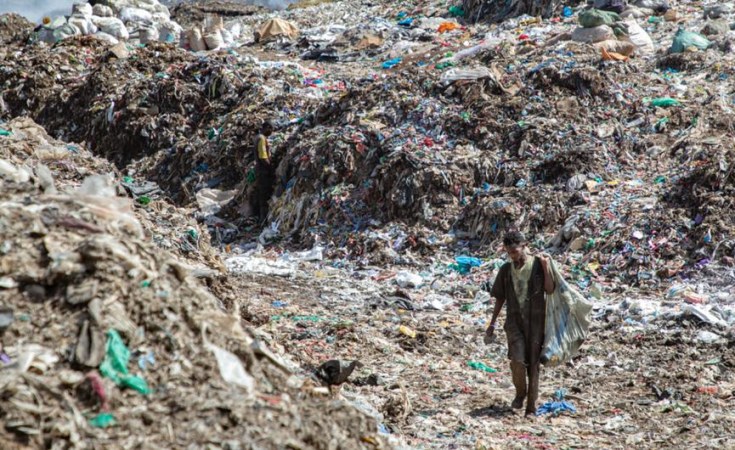 UNEP
Dandora landfill in Nairobi, Kenya, where much of the waste in the landfill is plastic.
UN News Service

Heads of State, environment ministers and other representatives from 175 nations, endorsed a historic resolution at the UN Environment Assembly in Nairobi on Wednesday to end plastic pollution, and forge an international legally binding agreement, by the end of 2024.

The landmark resolution addresses the full lifecycle of plastic, including its production, design and disposal.

On track 'for a cure'

"Against the backdrop of geopolitical turmoil, the UN Environment Assembly (UNEA-5) shows multilateral cooperation at its best," said President of the Assembly, and Norway's Minister for Climate and the Environment, Espen Barth Eide. "Plastic pollution has grown into an epidemic. With today's resolution we are officially on track for a cure."

The resolution, based on three initial draft resolutions from various nations, establishes an Intergovernmental Negotiating Committee (INC) which will begin its work this year, aiming to complete a draft legally binding agreement by the end of 2024.

That in turn, is expected to present a legally binding instrument, which would reflect diverse alternatives to address the full lifecycle of plastics, the design of reusable and recyclable products and materials, and the need for enhanced international collaboration to facilitate access to technology, to allow the revolutionary plan to be realized.

The UN Environment Programme (UNEP) said that it would convene a forum by the end of this year in conjunction with the first session of the INC, to share knowledge and best practices in different parts of the world.

It will be based on open discussion, informed by science, and report back on progress throughout the next two years. Finally, upon completion of the INC's work, UNEP will convene a diplomatic conference to adopt its outcome and open it for signatures.

"Today marks a triumph by planet earth over single-use plastics. This is the most significant environmental multilateral deal since the Paris accord. It is an insurance policy for this generation and future ones, so they may live with plastic and not be doomed by it." said Inger Andersen, Executive Director of UNEP.

"Let it be clear that the INC's mandate does not grant any stakeholder a two-year pause", she added. "In parallel to negotiations over an international binding agreement, UNEP will work with any willing government and business across the value chain to shift away from single-use plastics, as well as to mobilise private finance and remove barriers to investments in research and in a new circular economy".

Scale of the problem

The impacts of plastic production and pollution on the triple planetary crisis of climate change, nature loss and pollution are a catastrophe in the making, the UN agency said, with exposure to plastics harming human health, and potentially affecting fertility, hormonal, metabolic and neurological activity, while open burning of plastics contributes to air pollution.

By 2050, greenhouse gas emissions associated with plastic production, use and disposal, would account for 15 per cent of allowed emissions, under the goal of limiting global warming to 1.5°C (34.7°F) in line with the Paris Agreement on climate change.

More than 800 marine and coastal species are affected by this pollution through ingestion, entanglement, and other dangers, while around 11 million tonnes of plastic waste flow each year into the ocean. This could triple by 2040.

The historic resolution, entitled "End Plastic Pollution: Towards an internationally legally binding instrument", was adopted with the conclusion of the three-day UNEA-5.2 meeting, attended by more than 3,400 in-person and 1,500 online participants from 175 UN Member States, including 79 ministers and 17 high-level officials.

The Assembly will be followed by "UNEP@50," a two-day Special Session of the Assembly, marking UNEP's 50th anniversary where Member States are expected to address how to build a resilient and inclusive post-pandemic world.