Kenya: Global and Grassroots Come Together As Landmark Plastics Agreement Signed in Nairobi 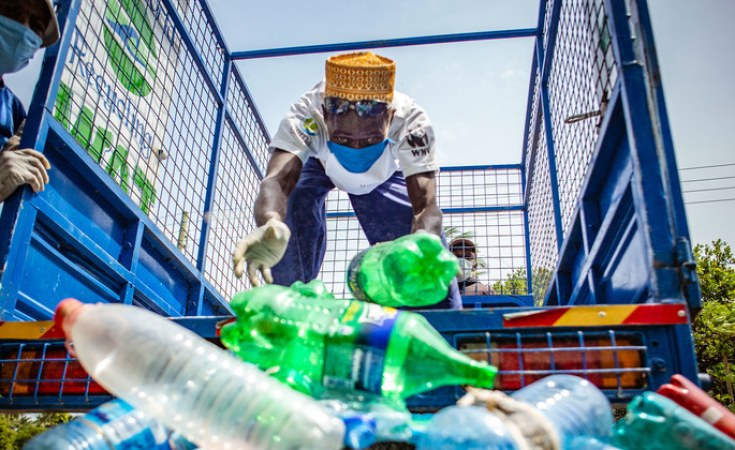 Florian Fussstetter/UNEP
Kenya has limited the use of single-use plastic (file photo).
Radio France Internationale
By Anne Macharia in Nairobi

Tired of the poor improper plastic waste disposal in Nairobi, Kenya, Nzambi Matee, 29, took it upon herself to solve one of the world's biggest environmental concerns by changing the world - one brick at a time.

The innovator and the founder of Gjenge Makers in Nairobi uses plastic waste to make bricks said to be more durable than concrete, an idea born in 2017 in her mother's backyard.

Innovation is important to solving the plastic problem, but action is key, says James Waikibia, an environmental activist in Kenya on the sidelines of the fifth United Nations Environmental Assembly (UNEA-5) hosted by Kenya this week.

Nairobi hosted leaders from across the globe who gathered to create this legally binding treaty to restrict the use of plastic and pollution, while activists like Waikibia have called for a ban on all single-use plastic.

"We need this to solve, once and for all, the uncontrolled production of single use plastic which is wrecking our environment in ways which cannot be measured," says Wakibia.

The treaty also addresses single-use plastic in its full life cycle, particularly on plastic production, use, design, and disposal.

"Today marks a triumph by planet earth over single-use plastics. This is the most significant environmental multilateral deal since the Paris accord. It is an insurance policy for this generation and future ones, so they may live with plastic and not be doomed by it," said Inger Andersen, executive director of the UN Environment Programme (UNEP).

Strides on the African continent

African climate activists continue to play their part in educating and curbing plastic use. Civil society groups such as Pan African Climate Justice Alliance (PACJA), are calling on African leaders to resist any trade deals and plans that may render their streets and communities a dumping ground for waste.

"As we speak right now, a huge percentage of plastic waste is inadequately disposed of in many countries across Africa adding that this posed threats to rivers and oceans," says Mithika Mwenda, PACJA executive director.

Africa already receives millions of tons of waste from western countries annually - the World Bank estimates that by 2050 waste generated in Sub-Saharan Africa will triple, he added.

On the fringes of the UNEA-5 conference, UN Deputy Secretary-General Amina Mohammed visited Kawangware primary school in Nairobi, where a mural of Kenyan environmentalist, the late Wangari Mathai, indicates the school's dedication to sustainability activities.

For those living in informal settlements in Kenya, residents learn about the environment through the Eco-Friendly club, which helps students carry out conservation activities in the real world, according to the club's patron, Joseph Kinyua.

"Despite coming from informal settlement students are learning how to be responsible from their environment," says Kinyua.

Grassroots steps are crucial alongside global treaties. The UNEP estimates that one million plastics are purchased every minute worldwide.

The resolution, based on three initial draft resolutions from various nations, establishes an intergovernmental negotiating committee, which will begin work this year, with an expected legally binding agreement to be completed by 2024.

In the interim, UNEP will be at the heart of science-based discussions until the committee finishes its work. A conference will be held at that time to officially adopt the outcome and open it for signatures.

"I quit a high paying job for this. It has been four years of hard work," said Matee.

She admitted that their first bricks were not saleable, but after more research, she had her prototype.

"We found the best measurements and the right mixture. 2019 was our first year in the market, and so far, we are doing great," she adds.

Nations Sign Up to End Global Scourge of Plastic Pollution