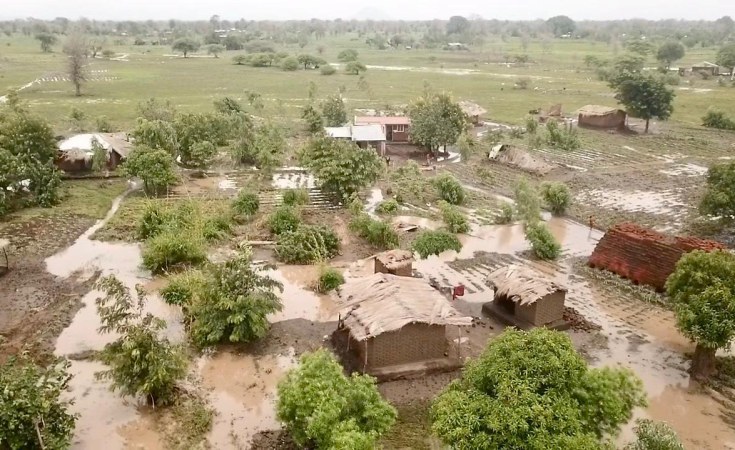 Badre Bahaji/WFP
On 25 January 2022, Malawi fell within the storm path of tropical cyclone Ana, which formed in the Mozambican Channel, bringing heavy rains and strong winds. Severe flooding has damaged people’s lives, livelihoods, socio-economic infrastructure, and key supply routes and bridges. On 26 January, the Government of Malawi officially declared a state of disaster. Current ﬁgures indicate over 187,000 households (845,000 people) have been impacted by ﬂooding and heavy rains, with many displaced in schools, churches, informal camp sites and temporary shelters. Thousands of hectares of smallholder farmers crops have been washed away. Interagency assessments are underway and results, providing a more detailed picture of the extent of damage, are expected by mid-week. The Department of Disaster Management Affairs (DoDMA) and humanitarian partners, including WFP, are already providing relief items to affected population. As part of our immediate response, WFP will be providing corn soya blend to some 21,000 households (around 95,000 people) in the four most affected districts of Chikwawa, Mulanje, Nsanje and Phalombe. Distributions are starting today, the 2nd of February. WFP is prioritising displaced people living in temporary shelters while at the same time looking for additional resources to continue and scale up the response. Corn soya blend is a nutritive porridge made of soya and maize and fortified with vitamins and minerals. Each household will receive a 12kg ration to prevent undernutrition. This initial response will target 38,000 people in Chikwawa, 26,000 people in Mulanje, 27,000 people in Nsanje, and 4,000 people in Phalombe. In addition, WFP is providing logistics support and increased transport capacity to DoDMA and partners to deliver relief items to affected areas. To continue ensuring support beyond this initial response period, WFP is appealing for more resources to respond to increased food insecurity for affected populations who, as a result of flooded lands, have experienced substantial crop damage. WFP stands ready to continue supporting the Government in addressing the urgent food needs of the affected population.
Voice of America (Washington, DC)
By Lameck Masina

Blantyre, Malawi — The United Nations and other humanitarian organizations in Malawi have launched a flash appeal for $29.4 million to provide assistance for the next three months to those hit hardest by Tropical Storm Ana in Malawi. The U.N. team in Malawi said Friday the appeal focuses on the six hardest-hit districts where an estimated 680,000 people need humanitarian assistance and protection.

"U.N. country team in Malawi, we have worked really hard to ensure this appeal is prioritized and principled and we are confident that the activities planned are those that are most urgently needed to deliver immediate relief to people who need it most," Komatsubara said.

Government figures show that over 990,000 people were affected in 17 of the country's 28 districts.

"While we are cautious that humanitarian support is not a long-term solution to the current climatic shocks that continue to increase in frequency and intensity in Malawi, we are faced with an urgent need to act swiftly to save lives and also the livelihoods of those whose homes and crops have been [affected] by the tropical storm Ana," Komatsubara said.

Several U.N. agencies and organizations including UNICEF, U.N. Women, the U.N. Refugee Agency and the World Food Program already have been helping the affected, especially those in evacuation camps.

Isaac Falakeza is a camp coordinator at Bangula Evacuation Camp in Nsanje district. The camp houses 8,000 displaced Malawian households and 2,500 households from Mozambique.

"Yes, we need further support because the major area of concern is water. It is wanted. Secondly, food is really wanted and some of the utensils. Some are even waiting until a friend cooks is when they borrow a utensil for cooking," Falakeza said.

Flood victim, Jakina Lameck, agrees. She says they also need blankets, cooking materials, food, even money which they can use to buy what they cannot find in the camp. In the meantime, the U.N. team says it appreciates help the international community has already shown in response to Tropical Storm Ana.