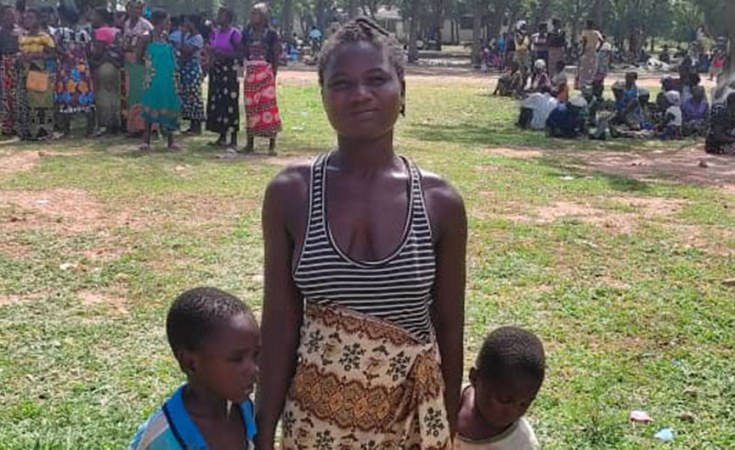 UNFPA
Monica, who had to rebuild after 2019 Cyclones Idai and Kenneth and lost everything to Tropical Storm Ana, holds her two children close at her new temporary home at Nyambese camp, Nsanje District.
UN News Service

Tropical Storm Ana left a trail of destruction in its wake in Malawi, particularly in hardest-hit southern districts, after it struck the country in late January. The UN Population Fund (UNFPA) has been at the forefront of efforts to help pregnant women and mothers by providing medical supplies, and reproductive services.

"The prospect of another cyclone was scary," says Monica, who lives in Mbenje in Malawi's Nsanje District. "We lived through the same experience with Cyclone Idai and then Cyclone Kenneth. We had to rebuild from scratch."

Word had spread through the village during the day that a powerful cyclone had hit neighbouring Mozambique, and on that Sunday evening two weeks ago the weather suddenly changed. For almost six hours, torrential rain and strong winds pummelled Mbenje; Tropical Storm Ana had made landfall in Malawi.

"I looked outside and saw the water levels rising. From previous experiences, I knew we had to move to safety," said Monica, who is six months pregnant. "I alerted my husband who quickly gathered the kids."

Monica and her family trudged through the rain and mud all night to Nyambese camp, one of 27 temporary disaster sites that have sprung up across Nsanje, and which are now sheltering people affected by the storm.

The following day, Monica and her husband made the five-kilometre trek back to their village to see whether they could salvage anything from their home. Their worst fears were confirmed. There was now a deep pool of water filled with rubble where their house had once stood, the food grain was gone and their animals had been washed away. "After seeing the destruction, I knew Nyambese camp would be our home until the flood water subsided," Monica said wearily.

Tropical Storm Ana has left a trail of destruction in its wake in Malawi, particularly in the hardest-hit southern districts of Nsanje, Phalombe, Mulanje and Chikwawa. Flooding has cut off roads, hampering relief efforts, while damage to the country's electricity infrastructure is causing frequent power outages.

In Nsanje District, more than 55,000 people are now living in temporary camps. Among them are Monica, who is expecting her third child in May, and approximately 1,500 pregnant women. Forced to share latrines, and with little privacy, women and girls are at increased risk of physical and sexual violence in a country where one in three women are subjected to gender-based violence.

Restricted mobility due to floodwaters and electricity blackouts are affecting the delivery of sexual and reproductive health care; the vast majority of health facilities in Nsanje district - 21 out of 24 - are struggling to provide services. Three newborns have already died in the district when incubators were left inoperable due to a lack of power. Fuel for the generator at the district hospital, as well as supplies including lifesaving maternal health medicines, are running low.

The UN Population Fund (UNFPA) and partners were on the ground within days of the disaster. To date 6,600 dignity kits containing basic hygiene items such as menstrual pads, soap and underwear, have been distributed to women and girls in Nsanje and Chikwawa. Repairs to the generator at Nsanje District Hospital have been completed, restoring power to the facility. Plans are also underway to deliver reproductive health kits containing medical and non-medical supplies, maternal health medicines and contraceptives to affected communities in the two districts.

"Our immediate priority is to restore quality sexual and reproductive health and protection services in the aftermath of the disaster," said Young Hong, UNFPA Representative in Malawi. "As extreme weather events become more frequent in the region, UNFPA's support to the recovery must focus on strengthening systems and building the resilience of affected communities, particularly women and girls."

For Monica, the road ahead will be challenging. She faces the prospect of rebuilding both her home and her life again. But, for now, her most pressing concern is her unborn child. "I lost everything, even my health passport," she says, cupping her face in her shaking hands. "I was supposed to go to an antenatal clinic this week, but travelling to the health centre is not possible. The roads are bad and still flooded."