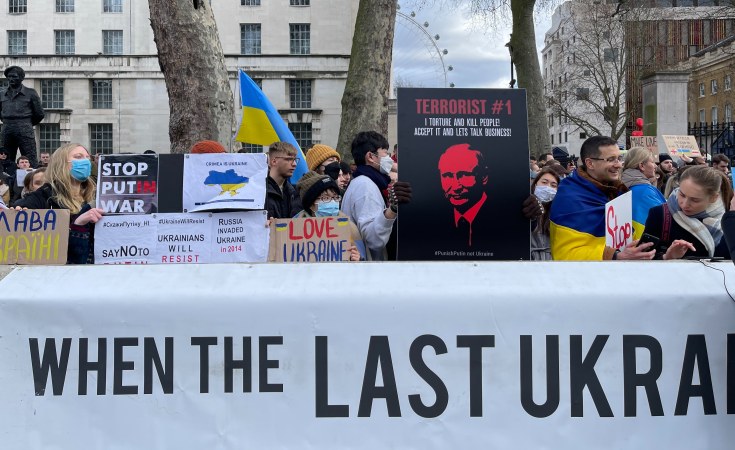 John Cameron/Unsplash
A protest in London against the Russian invasion of Ukraine on February 24, 2022.
This Day (Lagos)
By Gilbert Ekugbe

The invasion of Ukraine by Russia could affect Nigeria's importation of wheat, a major ingredient used for the production of a wide range of food including bread, noodles, pasta, cakes and many more.

Since the incursion of the Russian military on Ukraine, the price of wheat has surged globally, exacerbating already high food prices across the globe. Russia and Ukraine put together are responsible for about 14 per cent of global wheat production and control about 29 per cent of all wheat exports.

According to the Food and Agriculture Organisation (FAO) of the United Nations, the price of a bushel of wheat rose by 5.7 per cent to $9.347 following the escalation of the war. The FAO also warned about the possible implications of the crisis for food security beyond the region, including countries that rely to varying degrees on wheat sourced from that region.

The FAO predicted that disruptions to international food markets resulting from the conflict could potentially put pressure on import-reliant countries, especially those already experiencing high levels of food insecurity or grappling with their own food crises.

Nigeria and other import-reliant countries, therefore, have two options to either invest massively in critical infrastructure in states where it has competitive and comparative advantage to boost wheat production or look elsewhere away from Russia and Ukraine to import wheat.

Mid last year, the Association of Master Baker's and Caterers of Nigeria (AMBCN) ordered its members to increase prices of bread and other items by 30 per cent due to the prevailing economic situation in the country that affected cost of production,

The AMBCN also noted that the prices of key ingredients used in producing bread and other confectioneries have been skyrocketing each passing day.

It is expected that with the escalation of the Russian-Ukraine conflict, the price of bread would increase even further making bread out of reach for the common man while also forcing more bread factories out of business as a result of high cost of production and low patronage from consumers of bread due to little or no disposable income.

The Chief Executive Officer, Centre for the Promotion of Private Enterprise (CPPE), Dr. Muda Yusuf, told THISDAY that Ukraine and Russia are major producers of wheat as they account for about 30 per cent of the global wheat export. Yusuf pointed out that wheat is a major raw material for the production of flour, which is used for bread and some other confectionaries.

He said: "Therefore, the current development is going to disrupt the supply of wheat in the global market. There is therefore a risk of a hike in the cost of wheat which will affect the price of flour and a knock-on effect on the price of bread and other confectioneries."

He however stated that the Russian invasion of Ukraine has profound and multidimensional implications for the Nigerian economy, especially if it gets protracted.

"Additionally, the cost of flour, price of bread and other confectioneries may also take a hit. The summary is that if the conflict is protracted, these would be the downside risks to the Nigerian economy," he said.

He argued further that the bilateral discussions between the federal government and the Russian government on the resuscitation of Ajaokuta Steel Plant by the Russians that had progressed significantly before the pandemic disruption, might suffer setback because of the torrent of sanctions against Russia.

"Nigeria also imports substantial amount of wheat which would also suffer some disruption and impact on prices," he said.

The immediate past Chairman, Agricultural Group, Lagos Chamber of Commerce and Industry (LCCI), Africanfarmer Mogaji, said Nigeria would be affected by the current crisis between Russia and Ukraine, because Russia is very key in wheat export to Nigeria, plus the fact that Nigeria does not have any local alternative to serve as a backup.

Mogaji added that there are different varieties of wheat used for different purposes, saying that most companies would like to depend on Russia for their wheat requirements because of the output.

"Let us take for example, buying from Mexico or the United States, the finished product may come out differently and you may find the market react to the taste of the product," he said.

He explained that the nation is expected to see another hike in bread price, noting that the hike is inevitable because the Nigerian market takes advantage of any glitch in the supply chain.

Mogaji said: "Most of these bread factories are going to increase the price because they are not even sure when the next set of supply would come, so the bread makers will either increase their prices or totally just shut down and look at other areas of production because there is a limit to which the market can hold these shocks.

"Ideally, what they could have done was to invest in production to a point where the price is competitive, but Nigeria companies do not like investing long term and now they are paying for that," he added.

Previous Story
Cost of Cooking Gas Increases Again Over Russian Ukraine War
Next Story
Ukraine War - How Ghana Is Vulnerable, and What Can Be Done

Ukraine War - How Ghana Is Vulnerable, and What Can Be Done