South Africa: What Is All the Noise About Seismic Surveys About? 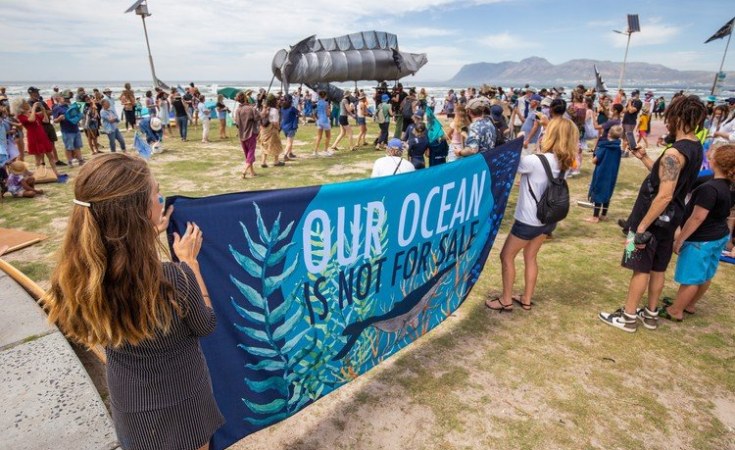 There has recently been a great deal of noise in the media about Shell, seismic surveys and the Wild Coast of South Africa. But what is all the fuss about? Are seismic surveys damaging to marine life, and just how serious is this threat to the ocean?

It is firstly important to understand a little about the ocean. On land, most animals use sight to find their way around. In the ocean it is different. Light does not penetrate to a depth of more than 200 m in the ocean but sound travels extremely efficiently in seawater. For this reason, most marine mammals and many fish and invertebrates depend on sound to find mates, find food, avoid predators, navigate and communicate.

We then need to understand how seismic surveys work and what they are for. Seismic surveys are used to explore the rock strata under the ocean. A ship tows multiple airgun arrays that emit thousands of high-decibel explosive impulses to map the seafloor. Simply put, the air guns produce sound blasts of up to 200 dB every 10 seconds, 24 hours a day for months on end. Hydrophones attached to long cables pick up the signal reflected off the sea floor. Based on the return time of the reflected or refracted impulses to the hydrophones, the underlying structure of the ocean floor can be mapped in 3D.

Seismic surveying works a little bit like the echolocation that dolphins and whales use to navigate and find their prey. An energy source (airgun) sends pulses of sound outward, which then travels through the water column and right into the seafloor. Some of the sound waves refract (bend) or reflect off surfaces, and a receiver (hydrophone) detects the returning sound or echo. The patterns in the returned sound help scientists to work out what the rock structure under the seafloor looks like and where possible reservoirs of oil and/or gas can be found.

Internationally, seismic surveys have been demonstrated to have negative impacts on a wide range of marine organisms, from small creatures which live in the sediments or plankton in the water column, to larger animals including ﬁsh, penguins, turtles and marine mammals.

Research in this field is relatively new and much of what we know about the impact of seismic surveys on marine animals has only come to light in the past 10 years. Technology is enabling this research to be done with improved accuracy and enhanced detail. In fact, a quick literature survey revealed over 50 recent papers that have found negative impacts. While earlier research work mainly focused on marine mammals, more recent research, since 2010, has focused on the impacts of sound on a wider variety of animals in the ocean. While research has shown that the impacts on fish themselves is likely to be localised, seismic surveys may have serious consequences for the health of fisheries and different fisheries are impacted in different ways.

Zooplankton are the tiny animals in the ocean that form the basis of the ocean food web. In fact, without zooplankton no ocean life would exist. Research published in 2017 revealed that seismic surveys cause significant mortality to zooplankton populations. Fish are impacted negatively in many ways - from direct physical impacts to behavioural impacts. All of which decrease the ability of fish to grow and reproduce. African penguins have been shown to avoid their preferred foraging areas during seismic activities. This means that the penguins needed to find food in other areas, thereby increasing the time spent feeding.

The impacts of seismic surveys on such endangered species is therefore likely to be considerable. The five turtle species found in South African waters are all endangered. A study in 2016 noted that while very few studies have investigated the impact of seismic surveys on the behaviour of turtles, physical damage to hearing and entanglement in seismic survey equipment are very likely. Even animals such as octopus, crabs, lobsters and jellyfish have been noted to exhibit physiological and behavioural responses to experimental sound exposure.

Can marine animals not simply move away? While some mobile animals such as whales and dolphins, and some species of fish, turtles and diving seabirds can move away, much marine life in the ocean is not very mobile. Plankton rely on water currents for movement, and most cannot move independently very far. Animals (such as invertebrates) that live in or the seabed do not move much. Even many species of fish are highly resident. Their gas-filled swim bladders used to maintain buoyancy are extremely sensitive to sound underwater and many fish use their swim bladders to produce sound (eg., cob and geelbek).

Large charismatic species such as the southern right and humpback whales have been highlighted in the media. While many individuals of these species migrate south to the Southern Ocean during summer, returning in winter, there have been regular sightings of humpback whales throughout the year off the South African coast. Common and bottlenose dolphins live year-round along the coast. While they are highly mobile, they live in shallow coastal waters on the continental shelf. There are also other species of whales and dolphins that are found in shelf waters throughout the year. This means that any seismic survey, regardless of when it is conducted, will have an impact on local marine mammals, some of which, such as the humpback dolphin, are endangered. Much research on marine mammals has revealed the impact of seismic surveys on these animals because of their reliance on sound for communication, to find food and to navigate.

However, there is still much we do not know about the effects of seismic surveys on marine animals. In fact, we are just scratching the surface of understanding the true impacts of seismic surveys. Changes to behaviour, impacts on opportunities to feed or find mates, decreased ability to avoid predators and chronic stress, and impacts on growth and reproduction are all very difficult to study underwater. However, we need to remember that a lack of evidence of impact does not mean that there is no impact; it just means that we do not yet know about it. The more we learn the more we realise just how little we know about the lives of many marine animals. It is also important to remember that these negative impacts are occurring in an ocean that is increasingly impacted by humans - overfishing, pollution, rising temperatures and ocean acidification are just some of the anthropogenic impacts on marine life.

Research is also revealing just how critical a healthy ocean is for human health. From climate change to food production, we need healthy oceans to survive. In the past we proceeded in blissful ignorance of the impact of our actions. Now, as we start to better understand the impact of seismic surveys, surely, we should adopt a more careful, precautionary approach? As we are learning with climate change, the long-term impact of seismic surveys is very likely to outweigh the short-term gains of discovering more oil and gas. Surely the best way forward for long-term environmental sustainability and local job creation is to expand technology which makes use of renewable energy, and to optimise the use of the natural assets of South Africa's oceans and coasts for ecotourism, sustainable fisheries and other nature based blue economy initiatives.

Dr Judy Mann-Lang is passionate about marine conservation and has focused her career on helping people to care for the oceans. She has worked for the South African Association for Marine Biological Research (SAAMBR) in Durban since 1992. She was the Director of Education for 10 years, the uShaka Sea World Director and the first woman Chief Executive Officer of SAAMBR. She is currently the Conservation Strategist of the Association. She holds a Master's Degree in Ichthyology, a Bachelor's Degree in Business Administration and PhD in culture and environmental learning from the University of Queensland in Australia.

Previous Story
Meaningful Consultation With Communities - What Does It Mean?
Next Story
Court Vindicates the Rights of West Coast Fishing Communities to Be Consulted Before Seismic Surveys

Meaningful Consultation With Communities - What Does It Mean?

Next Story
Tagged:
Copyright © 2022 Africa In Fact. All rights reserved. Distributed by AllAfrica Global Media (allAfrica.com). To contact the copyright holder directly for corrections — or for permission to republish or make other authorized use of this material, click here.