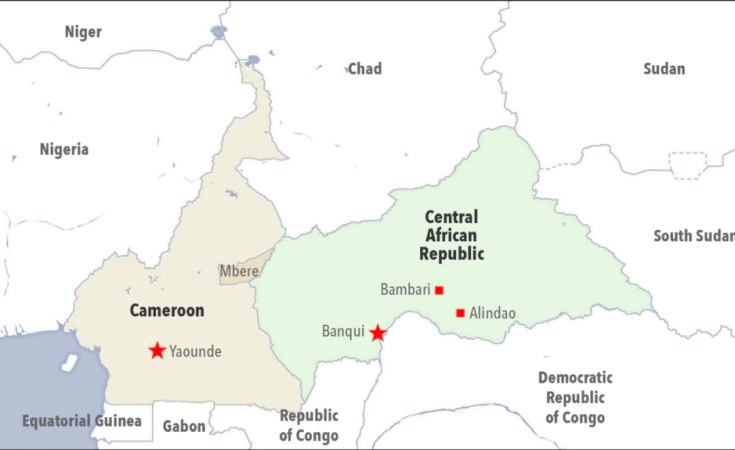 Yaounde — Cameroon's military has deployed hundreds of troops to its eastern border with the Central African Republic after CAR rebels this month abducted at least 35 people. The military says the rebels are targeting merchants, farmers, and ranchers and stealing money and cattle.

Cameroon's military says scores of troops on Monday raided villages and forests on its eastern border with the Central African Republic to free civilians held captive by CAR rebels.

Speaking via a messaging application, Colonel Dominique Njoka says he led troops on the rescue mission in Mbere, a border administrative unit, where rebels were holding hostages.

"When we arrived, unfortunately they [suspected rebels] saw us. So, they opened fire, but we reacted immediately, and, in the confrontation, they ran away. Before running away, they killed one hostage and one was seriously wounded, so he died. However, out of the seven we liberated, five arrived {home} safely. We keep on asking the population to cooperate, to give us information at the appropriate time so that we can react," he said.

Njoka said some of the rebels escaped across the porous border while others are still hiding in forests in Cameroon.

He said they deployed hundreds of troops to the area to flush out the rebels, who have abducted at least 35 civilians in Cameroon in the past three weeks.

CAR authorities say since March fighting with rebels has increased.

The U.N. peacekeeping mission to the CAR, MINUSCA, last week said rebels pushed out of several towns were hiding on the border with Cameroon.

MINUSCA said the CAR rebels were fighting to control border towns, including Bambari and Alindao.

Authorities say the rebels are crossing the border to escape fighting with the CAR's military and to steal and abduct for ransom.

He spoke on Cameroonian media Canal 2 TV and Equinox Radio.

Alami said a strange visitor informed him that his 20-year-old son was in captivity in the forest on the border with the Central African Republic. He said the stranger told him the captors wanted at least a $5,000 ransom for his release but did not tell him where and how the ransom should be paid. Alami said he spent two sleepless nights not knowing how to get in touch with either the abductors or his son.

Cameroon's military says they were able to free the five hostages after villagers informed them where the rebels were hiding in the forest.

Cameroon shares a more than 900-kilometer-long border with the Central African Republic.

Cameroon this month sent its chief of defense to the border area to mobilize troops to stop the rebels from entering its territory.

The Central African Republic descended into violence in 2013 when then President Francois Bozize was ousted by the Séléka, a coalition from the Muslim minority that accused him of breaking peace deals.

The CAR government in 2020 accused Bozize of supporting rebel attacks, which he denied.

The ongoing fighting has forced close to a million Central Africans to flee neighboring countries, including Cameroon, Chad, the Democratic Republic of Congo, and Nigeria.