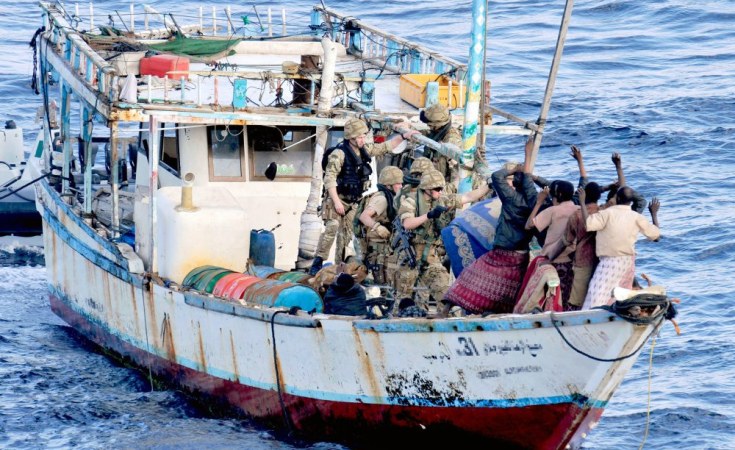 With the lapsing of the Security Council's piracy resolution, Western Indian Ocean security practices can show their worth.

Piracy off the coast of Somalia has long captivated the attention of the media and governments. But the expiry of the United Nations Security Council's (UNSC) counter-piracy Resolution 2608 on 31 March attracted little publicity. It is the first time since 2008 that the UNSC has not renewed the region's piracy resolution.

The UN Convention on the Law of the Sea gives coastal states extensive rights and security responsibilities over their territorial seas - a zone extending 12 nautical miles from the coastline. In Somalia's case though, the government and navy were until recently practically non-existent, following the collapse of the state in 1991. Even so, international naval forces had to respect Somalia's territorial waters.

The problem of pirates using this zone as a refuge and the 12 nautical mile boundary as a barrier needed addressing. So annual UNSC resolutions since 2008 allowed foreign naval missions to legitimately use 'all necessary means to repress acts of piracy and armed robbery' in this zone, with Somali consent. The resolutions allowed states to intervene in Somali territorial waters to pursue, intercept, seize and arrest pirates.

Somalia's government increasingly insisted that the UNSC's resolutions had achieved their primary objective of suppressing piracy and need not be renewed. Resolution 2068, adopted on 3 December 2021, was given a timeframe of just three months instead of the usual year. Somalia saw its continuation as an unfair imposition for two reasons.

First, the country has made progress in taking responsibility for its own security, both offshore and onshore. In August 2021, Somalia's Maritime Directorate began revising its maritime resource and security strategy. The National Maritime Coordination Committee initiated a mapping of all maritime activities, including international support.

Somalia's Ambassador to the UN Abukar Osman told the UNSC, 'We have accelerated our efforts to build and capacitate our maritime law enforcement agencies and have established a specialised maritime unit to specifically deal with new international maritime threats and crimes'.

According to the Somalia Transition Plan, security forces are expected to take over all responsibilities from the African Union mission in the country by 31 December 2024. The AU Transition Mission in Somalia (ATMIS) has recently replaced the long-standing AU Mission in Somalia (AMISOM). Maritime security has seldom featured in AMISOM analysis and decision making, but piracy did exacerbate insecurity in Somalia by fuelling crime and corruption because of the circulation of large ransom payments.

Second, no successful hijacking has been reported since March 2017, and both attempts and attacks have declined sharply since 2013. This is referred to in the Secretary-General's 2021 report on piracy and armed robbery at sea off Somalia.

Observers such as the International Maritime Bureau suggest these remain insufficient reasons to let the UNSC resolution lapse, urging caution and pointing out that doing so might encourage piracy. Terrorism is worsening, as is the country's political crisis. It therefore seems unlikely that, in this context, Somalia's ability to provide maritime security will rapidly improve.

Several UNSC members, such as France, the United Kingdom and the United States (US), have advocated for the continuation of the anti-piracy measures, for example to protect World Food Programme vessels. The lapse is unlikely to reverse improved security trends but does raise questions about the continued presence of these and other big powers in the region.

First, crucial components of the maritime security architecture for dealing with Somali piracy remain in place. For instance, the internationally recognised transit corridor allows ships to safely travel the Gulf of Aden rather than sail close to Somalia. The shipping industry has also implemented several best practice measures that have reduced the risk of falling prey to pirates.

Second, criminal gangs capable of committing piracy have turned their attention to other illegal activities. To counter this threat, multilateral efforts are broadening their focus to incorporate transnational crimes at sea. Several counter-piracy initiatives have adapted to a new security reality off the coast of Somalia. The Jeddah Amendment to the Djibouti Code of Conduct and the Contact Group on Illicit Maritime Activities in the Western Indian Ocean took proactive steps to revaluate or expand their missions.

The European Union's (EU) Operation ATALANTA would be most affected by the non-renewal of the counter-piracy resolution because access to Somali territorial waters was an essential component of fulfilling its mandate. The EU extended the operation for a year, expecting the UNSC resolution to be renewed. The problem was somewhat mitigated after the EU Council recently launched its Coordinated Maritime Presences concept, which complements ATLANTA. The concept shows European resolve to stay involved in regional maritime security activities.

The changes brought on by the lapsing of the UNSC resolution will make it difficult for foreign countries to use counter-piracy to explain their military presence in the region. AU Peace and Security Council members have shared their concerns about foreign military bases in Africa, many of which were justified in the name of fighting Somali piracy.

The enormous investments made by countries such as the US, Japan, Germany, Italy and China, combined with the interest of states such as Djibouti in generating revenue from their presence, means they are unlikely to vacate their bases soon. Growing geopolitical competition and militarism in the Indian Ocean, and insecurity stemming from the Yemen conflict, are also reasons why the situation probably won't change soon.

The way the EU, US, China and others now choose to frame their longer-term intentions in the region and their commitment to building Somalia's governance and security capabilities will be illuminated for the world to see.

Development partners: This article is published with funding from the government of Norway. The ISS is also grateful for support from the members of the ISS Partnership Forum: the Hanns Seidel Foundation, the European Union, the Open Society Foundations and the governments of Denmark, Ireland, the Netherlands, Norway and Sweden.