Africa: Vaccine-Preventable Diseases Surging in Africa Due to Covid-19 Disruptions 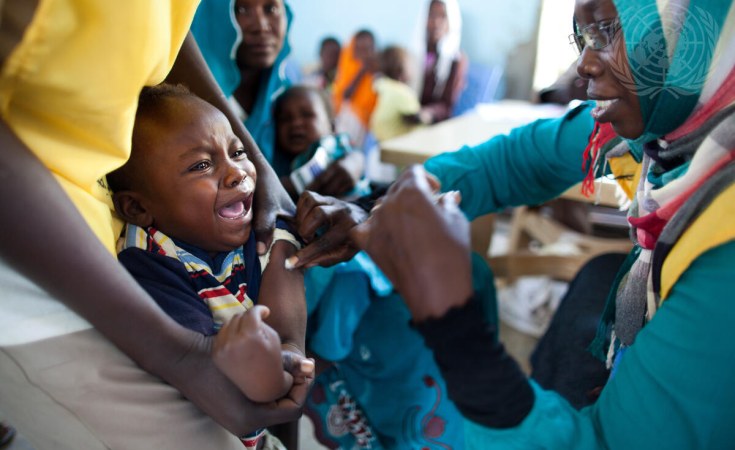 Geneva — The World Health Organization warns that vaccine-preventable diseases are spreading across the African continent because routine immunizations against killer diseases have been disrupted by the COVID-19 pandemic.

Tens of millions of people have missed out on routine immunization services. That not only puts their lives at risk from potentially deadly diseases but creates an environment in which killer diseases can thrive and spread.

Benido Impouma, director for communicable and noncommunicable diseases in the World Health Organization's regional office for Africa, said the pandemic has put a huge strain on health systems. It has impaired routine immunization services in many African countries and forced the suspension of vaccination drives.

Over the past year, he said, outbreaks of vaccine-preventable diseases have increased across the continent.

"For instance, between January and March of this year, around 17,000 cases of measles were recorded. This is a 400 percent increase compared with the same period last year," Impouma said. "Twenty-four countries in our region confirmed outbreaks of a variant of polio last year, which is four times more than in 2020."

He noted that outbreaks of other vaccine-preventable diseases, such as yellow fever, also are surging.

The World Health Organization and UNICEF recently issued a report warning of a heightened risk of vaccine-preventable diseases. They attribute it in large part to increasing inequalities in access to vaccines due to pandemic-related disruptions.

They expressed particular concern about a worldwide spike in measles cases, which have increased by 79 percent in the first two months of this year. They noted that most cases were reported in Africa and in eastern Mediterranean regions.

WHO is working to improve immunization coverage and protection for children, Impouma said, adding that WHO and its partners are supporting African countries to carry out catch-up routine vaccination campaigns.

"More than 30 African countries implemented at least one routine catch-up immunization campaign in the second half of last year," he said. "And this year, countries are showing progress, with measles and yellow fever campaigns starting again. Central African Republic, Chad, Equatorial Guinea, Ethiopia, Nigeria, Somalia and South Sudan have reinstated measles campaigns, which is good news."

However, COVID-19 news is not as promising. WHO said that this week new COVID-19 cases and deaths on the continent have increased for the first time after a decline of more than two months for cases and one month for deaths.

The latest recorded figures put the number of cases at 11.6 million, including nearly 253,000 deaths.

Previous Story
South Africa Is Proposing Plans to Manage Diseases Like Covid. Why They're Flawed
Next Story
Chinese Lending to Africa Fell During First Year of Pandemic - Researchers

South Africa Is Proposing Plans to Manage Diseases Like Covid. Why They're Flawed