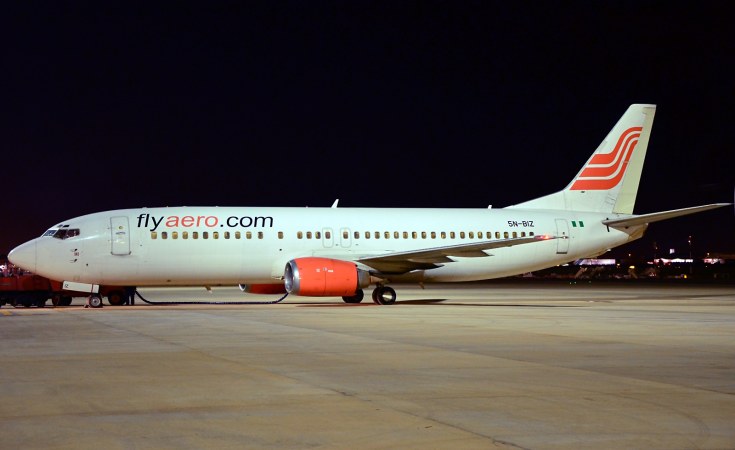 Barring any urgent intervention, Nigeria's foremost carrier, Aero Contractors may be on its way out of the skies after over 61 years of flight operations.

With only two aged aircraft, Bombardier Dash 8-300 and Boeing 737-500 in their early 30s and totally bereft of operating cash, the airline is now on its knees about to shut the door for scheduled services.

Aero Contractors, which provided shuttle service for oil and gas industry for decades and extended its service to scheduled flight operations since 2000 has become moribund with over N50 billion debt overhang.

THISDAY investigations revealed that economic recession occasioned by the COVID-19 lockdown and protracted low season after December heavy passenger traffic demand, culminated to the financial drought of the airline.

It was learnt that currently, the airline finds it difficult to fuel its existing fleet.

The Managing Director of the airline, Captain Abdullahi Mahmood in a telephone interview with THISDAY confirmed the precarious state of the airline and identified factors that led to debilitating condition of the indigenous carrier.

Captain Mahmood said that the airline could stop operation at any time because the management is finding it increasingly difficult to keep the aircraft in the airspace.

He said that high cost of foreign exchange, high maintenance cost, high cost of aviation fuel and low traffic are responsible for the bad condition of the airline.

According to him, "Maintenance cost is high, foreign exchange is not available and the high fuel price in addition to the fact that after the high Christmas season, there was low passenger traffic from later January till Easter period. Then we are also contending with overhead, which is so much.

"When you have no traffic and what you are generating cannot defray operating cost, you cannot survive. We are still operating but from the rate we are going we may shut down anytime."

He also explained that because the aircraft in the fleet are old and breakdown very often, the cost of maintenance is high, "and spares have to be imported and even insuring the aircraft requires foreign exchange."

When contacted, the immediate past CEO of the airline, Captain Ado Sanusi, confirmed that it is very unlikely that the airline would survive, except it urgently acquires new fleet.

Sanusi who took over the airline in February 2017, when it was in comatose told THISDAY that the airline was coming back from shutting down when he began to preside over its affairs.

"The airline had two aircraft, which were due for major checks, the C-check, passenger confidence was low and three of the airline's aircraft were in maintenance facilities overseas. The airline was at the brink of collapse when we took it over, "he said.

Sanusi further explained that the airline was under receivership, as it was being managed by the Asset Management Corporation of Nigeria (AMCON), "so what the airline needed was more aircraft, which would enable it to increase revenue."

THISDAY learnt that the AMCOM had invested so much money in the airline but was not ready to invest more, a situation that lead to Sanusi and his team to consider having the C-check conducted in-house.

"The engineers in the airline went to work, they took the Boeing 737 classic and successfully conducted C-check and received Aircraft Maintenance Organisation (AMO) certification from the Nigerian Civil Aviation Authority (NCAA).

"The success of the C-check opened door for us because it restored passenger confidence, knowing that we had the ability to maintain our aircraft and from 40 to 50 per cent load factor, our passenger traffic grew to 80 per cent.

"AMCON was elated that they continued to support us. We sold assets we didn't need and we brought back one of the three aircraft ferried overseas for maintenance and now had two Boeing and One Bombardier Dash 8. Our revenue rose from N180 million to N2 billion. We did a lot.

"We bought the engines of United Nigeria Airlines Boeing B737-300 aircraft. With our revenue, we revamped the rotary wing of the airline and would have clinched a multimillion-dollar deal with Total for shuttle service but because the airline was under receivership we didn't. We even went into a strategic partnership with indigenous company to revive the rotary wing and was in that process when COVID-19 came," Sanusi said.

"The COVID-19 lockdown was the undoing of the airline, like many others in other parts of the world, "Sanusi said, adding, "It was during the lockdown that the Maintenance, Overhaul and Repair (MRO) facility came alive and began to engage in third party maintenance, which is maintenance of other airlines' aircraft."

"Immediately after the lockdown we were ready to go into business. Passenger demand was unprecedented. The prospect of Aero was very good. It had a chance to recover, but the biggest challenge was fleet renewal. Average age of the aircraft was late 20s or early 30s. We communicated to the shareholders.

'We did not have the ability to do D-check, which was heavy check, but we later got approval and we conducted D-check on the Boeing 737 after which we would retire the aircraft, hoping that there would be fleet renewal in order to put the airline as an on-going concern, "Sanusi revealed.

Aero, is described as a fully made airline because it has scheduled operations wing, rotary wing, MRO and training school; no other airline in Nigeria came close.

THISDAY learnt that for the airline to survive some of the workers had to be put on redundancy and at the peak of revival it had about 400 staff, about 100 in schedule wing, 10 in training and the others on administrative and maintenance and whenever it had more jobs on maintenance it recalled more technical staff.

On why the airline was going under, Sanui said, "The airline needs fleet renewal without which it cannot survive. External factors include high cost of aviation fuel, scarcity and high cost of forex, low passenger traffic, which was extraordinarily very low. When I left the airline had a good chance of survival, even coming out of receivership. But it needed strict financial management," he said.

A former top manager of the airline said that the genesis of Nigeria's foremost carrier started because of the way it went into scheduled passenger operation, the kind of aircraft it acquired, the age of the aircraft and "When AMCON took it over it did not inject enough fund into the airline. If sufficient funds were injected and the rotary wing was revived it would have survived; although the oil and gas industry was going down at a time when the price of crude crashed. The airline has good people but it needed finance," he said.