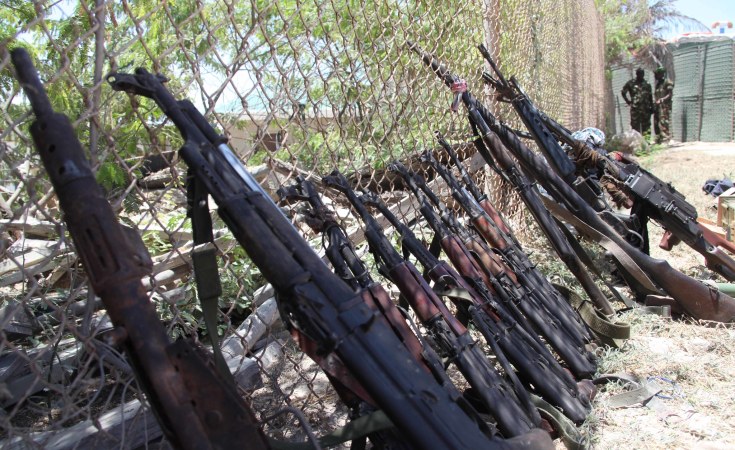 Mogadishu — 'In Somalia, your only protection is the number of weapons you have.'

The price of an AK-47, the standard weapon of Somali militias, has soared on gun markets ahead of a fraught ballot this weekend, when lawmakers will select the country's next president.

Parliamentarians from Somalia's lower and upper houses will decide on 15 May from a list of 39 candidates that includes two former presidents, an ex-prime minister, as well as the second term-seeking incumbent, Mohamed Abdullahi Mohamed, known as "Farmajo".

Tensions are high in the run-up to the vote, especially in Mogadishu; the capital, and the stronghold of the powerful Hawiye clan, who are opposed to Farmajo.

Armed clashes broke out in April 2021 when politicians resisted Farmajo's attempt to extend his first term by two years. The president said it was to allow long-delayed elections to be held, but his critics interpreted it as a "power grab".

The fear is that a disputed vote on Sunday could trigger even worse violence. As a result, the price of a standard AK-47 has more than doubled since last year - up by nearly 40 percent in just the last few months, according to research by The New Humanitarian among gun traders.

Prices dipped towards the end of last year (see the table above), after Farmajo agreed to abandon his term extension plan and allow Prime Minister Mohamed Hussein Roble to push through parliamentary elections. But the fall was short-lived as political distrust ratcheted up once more.

"Politicians want to protect themselves, and so do their clans," Nur told The New Humanitarian. "In Somalia, your only protection is the number of weapons you have."

Amina Mo'alim, who works as a cleaner in a downtown hotel, is worried about what could happen in the coming days. She had to flee the 2021 fighting, along with an estimated 100,000 others, many of them the urban poor - survivors of frequent droughts, and a long-running jihadist conflict in the countryside.

"None of the presidential candidates have publicly acknowledged they will concede if they lose," she told The New Humanitarian. Like many other Somalis, she has stayed at home foregoing her pay this week as a precaution, and is prepared to do so again next week.

Abdirahman Hassan, a government worker, shares those concerns. "Every day, I hear about new weapons purchased and tested in Hodan district [the main gun market]," he told The New Humanitarian. "People are saying, 'if the incumbent president is defeated and does not concede, it will lead to fighting'."

Clan-based arithmetic - on which Somali politics is based - suggests Farmajo might struggle to find the votes needed to be re-elected when the lawmakers meet on Sunday.

The five regional states that have sent a slate of parliamentarians to Mogadishu. Two - Puntland and Jubbaland - are expected to back the opposition; Galmadug and Hirshabelle are a toss-up; while only one, South West, has declared for Farmajo.

Since the collapse of Somalia's last central government in 1991, clans have been central to political power.

The make-up of Somalia's 275-seat lower house is based on a so-called "4.5" formula: Each of the four "major" clans - the Hawiye, Dir, Darod, and Rahanweyn - has 61 seats; minority groups, known as "point five", share the remaining 31 seats. State representatives sit in the 54-seat upper house.

Farmajo, a Darod, came to power in 2017 and was initially hailed by some as a reformer. He had broken the political dominance of the majority Hawiye and promised the next election would be under a "one-person, one-vote" system, rather than the clan-based, indirect ballots of the past - a pledge he did not deliver on.

Since the clashes last April, Somalia's fragile security forces have also splintered along clan lines - despite years of Western donor funding. Although the bulk of the army is believed to side with the opposition, Farmajo has the loyalty of new special forces units trained and equipped by Turkey and Eritrea.

Mohamed Adan, a police captain who monitors the illegal weapons markets, believes the perceived politicisation of the security forces is one reason people have turned to their clans for protection.

"In the past five years, the government has [used the security forces] to silence and attack dissidents, including opposition politicians," he told The New Humanitarian. "This has led to the resurgence of clan militias."

Much of what's available for sale on the gun markets in Hodan is from stocks diverted illegally by members of the armed forces - a further example of the hurdles to security sector reform that has bedevilled attempts to build a professional national army.

Any collapse into serious fighting will only benefit the jihadist group al-Shabab. It has battled Somali governments for two decades, viewing successive administrations as corrupt and dependent on Western governments for their survival.

The al-Qaeda linked insurgents, who hold much of the countryside, have launched a flurry of urban bombings throughout the election period, which began with parliamentary polls in November.

The lawmakers meeting on Sunday will do so in an airport and diplomatic zone protected by African Union forces, deployed for the past 15 years to prop up governments in Mogadishu.

If political violence does break out, the "little security gains will be reversed and will strengthen al-Shabab to retake urban towns that had been liberated years ago", Dahir Hassan, a security analyst and former Somali military officer, told The New Humanitarian. "The group [has already gained] more power because the government has shifted its focus from security to politics."

Next Story
Tagged:
Copyright © 2022 The New Humanitarian. All rights reserved. Distributed by AllAfrica Global Media (allAfrica.com). To contact the copyright holder directly for corrections — or for permission to republish or make other authorized use of this material, click here.