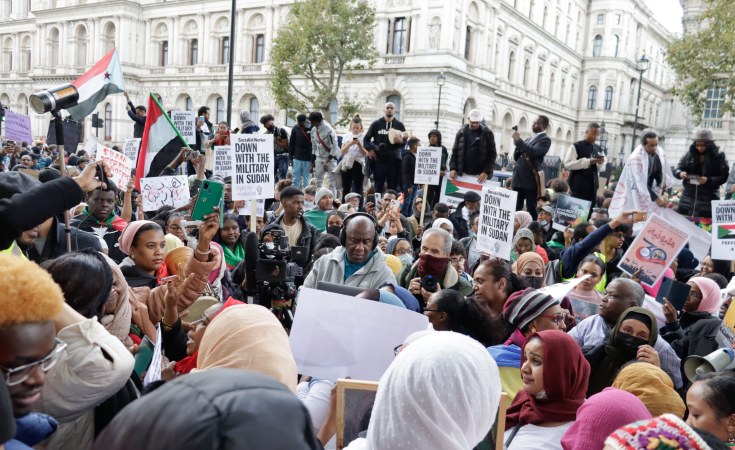 Steve Eason/Flikr
The coup in Sudan is sparking protests across the world. This one took place in London.
Dabanga (Amsterdam)

ED Damazin / El Roseires — The Wali (governor) of Sudan's Blue Nile state, says that basic services across the region have ground to a halt in all localities, except for El Roseires and the state capital Ed Damazin.

In an interview with Radio Dabanga's Voice of the States programme, Wali Ahmed Badi said that the basic services in all the localities of the region are zero, except for the localities of El Roseires and Ed Damazin.

The Wali called on the public to "be patient". He asserts that he when he took office, he found the state "in a very miserable situation". and that no services were available after the signing of the Juba Peace Agreement.

He explained that over the last period, the state government was indeed able to provide some of the water pumps needed for the town of El Roseires and state capital Ed Damazin, has raised the electricity generating capacity, in addition to implementing some legislation related to the Juba Agreement.

The Wali acknowledged the deteriorating conditions in the region, calling on the public to be patient.

Mysterious Injuries During Yesterday's Marches of the Millions in Sudan