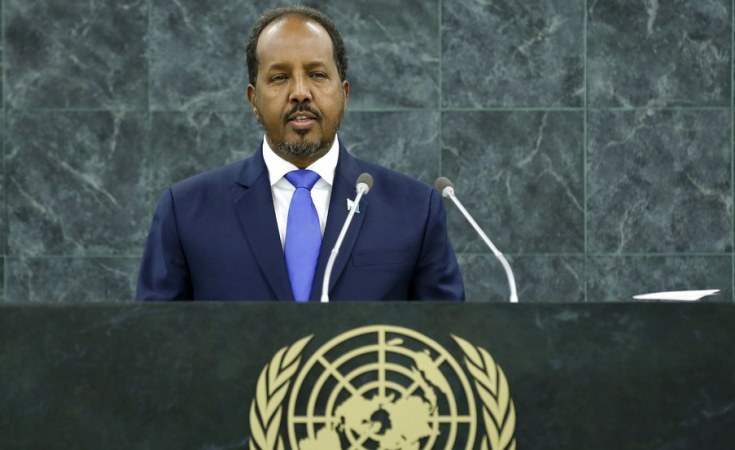 The voting took place in the heavily guarded Mogadishu airport with African Union forces securing the tent inside a hangar, where the secret balloting took place. In a joint session of the two houses of the parliament, the Upper House and Lower House, 327 lawmakers cast ballots for 36 presidential candidates in three rounds of voting.

Outgoing President Mohamed Abdullahi Farmaajo and his immediate predecessor, Mohamud, competed in the final round of voting, needing a simple majority to win. It was a rematch of the 2017 election when Farmaajo beat Mohamud to become president.

"Out of 327 parliamentarians who voted the final round, Hassan Sheikh Mohamud got 214 (votes), while President Farmaajo got 110, three votes spoiled," Speaker Adan Mohamed Nur said. "He is the legitimate president from this hour."

Farmaajo congratulated Mohamud during a live broadcast on national television.

"Thanks to Allah for allowing us to complete our election tonight. I thank those who voted for me and those who voted against me," Farmaajo said. "I want to welcome my brother, the new president. Congratulations."

Mohamud was immediately sworn in.

Mohamud said he would not be looking to go against Farmaajo supporters. "There will be no revenge," he said. "If we have differences, we will use the country's laws to settle it."

The voting went into the third round after no candidate won the two-thirds (220) majority required for a candidate to win outright in the first and second rounds.

Mohamud was president from September 2012 to February 2017. In his previous administration, he led with a "six pillar policy" plan topped by stability and the rule of law, peace-building, reconciliation, economic recovery and national unity. When he left power in February 2017, the main challenge to Somalia's stability was the insurgent group al-Shabab. His successor failed to remove the al-Shabab threat, too.

Earlier this month, the militant group attacked an Africa Union military base in the town of El-Baraf, killing at least 30 Burundian peacekeepers.

Mohamud was born in the town of Jalalaqsi in the Hiran region in 1955. He graduated from Somali National University with a bachelor's degree in technology and received a master's in technical education from Barkatullah University. He was awarded an honorary doctorate by the same school in 2015.

In 1999, he cofounded the Somali Institute of Management and Administration Development (SIMAD) in Mogadishu, which later became one of the biggest universities in Mogadishu.

In 2008, Mohamud was appointed as the CEO of Telecom Somalia.

In 2011, he entered politics and established the independent Peace and Development Party (PDP), which elected him as the party's chair. In August 2012, Mohamud was selected as a member of parliament. The following month he was elected president of Somalia.

Mohamud was elected by an indirect election as the country's leaders could not agree on an election model.

On February 20, 2020, Farmaajo signed a landmark election law that allowed popular voting. But it immediately hit a snag because the government did not control the entire country. Key Somali regional leaders and opposition politicians resisted the initiative, accusing Farmaajo of concentrating power at the center of the country and weakening the role of other regions.

In June 2020, National Independent Election Commission (NIEC) chair Halima Ismail Ibrahim ruled out holding direct elections by Nov. 27, 2020, as scheduled, the date the parliament's mandate expired. Halima gave the parliament two options: An electionbased on biometric registration that she proposed to take place in August 2021; and a manual-based registration that could have been held in March 2021.

She cited that buying voting machines and election equipment, securing election centers and enacting a mass awareness campaign would take months to complete.

That sparked a long political tussle that forced a return to the indirect election where clans and regional leaders played a role in who is elected to parliament. On Sept. 17, 2020, the sides agreed that elections would take place in two towns in each of the federal member states, and in Mogadishu. They also agreed that 101 electoral delegates would elect each lawmaker.

The September 17 agreement faced a setback on April 12, 2021, when the Somali parliament controversially extended the mandate of the parliament and the president by two years. This led to violence in Mogadishu and condemnations by the international community.

On May 1, the Somali lawmakers retreated from the controversial term extension plan and accepted a return to the Sept. 17 agreement. On that same day, Farmaajo handed over the security and management of the election process to Prime Minister Roble.

Allegations of voter irregularities overshadowed the election process. The election results of at least four seats were nullified amid fraud concerns, two were later approved, one was recontested and one remains nullified. Roble himself admitted the election was not taking place as scheduled and fired several members of the election disputes resolution team.

The new president faces the same challenges that has impeded the country's progress. In addition to ongoing droughts and al-Shabab, the country's federal system is not functioning properly.

She also said the new president needs to work on making sure the Somali people directly elect the next president. She said the election model the country is going to adopt must be stated in the constitution.

The other key challenge is tackling the country's security problems. Al-Shabab has been fighting the Somali government for nearly 15 years.

Jihan Abdullahi Hassan, former director of the Somali Ministry of Defense, said the new president must restore discipline among the military. "The army has mingled in politics," she said. "The first task is to separate the army from the politics."

"Al-Shabab can be defeated," she said. "The important thing is to have a well-defined overall national security policy between the federal government and the federal member states."