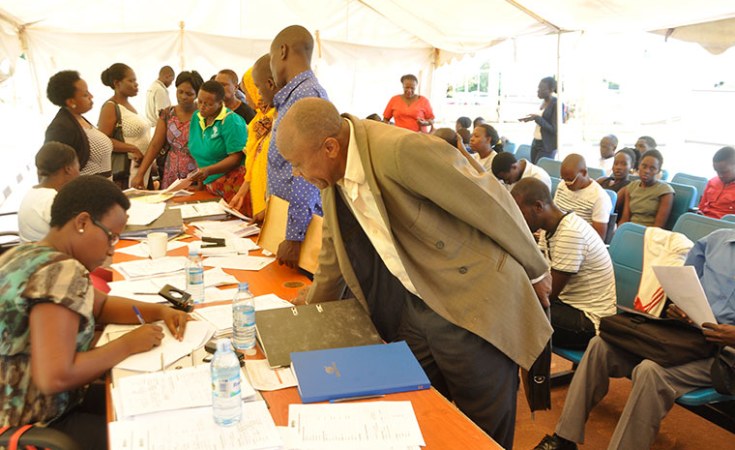 When Otajar John heard senior citizens would be given 25,000 Ugandan shillings ($7) per month as part of a new government welfare scheme, he jumped at the chance to apply.

After a lifetime of working as a farmer, the octogenarian from rural eastern Uganda was living hand to mouth, reliant on begging to survive. The financial support offered by the state would certainly help him, he thought.

But almost two years on, John has still not been able to claim his monthly allowance because he does not have a valid national digital identity card - known as ndaga muntu - a requirement to access most public and private services in Uganda.

"I registered for the ID card, but the date of birth made me 10 years younger and I couldn't use it," the 83-year-old told the Thomson Reuters Foundation by phone from his home in Bazaar village in Kumi district.

"I have repeatedly asked to have my ID card corrected, but the officials refused to do it and turned me away. Without it, I have no choice but to continue begging until I die," he said speaking in the Ateso language through a translator.

John is one of millions of Ugandans on whose behalf an alliance of charities has sued the government, arguing that vulnerable groups have been denied access to potentially life-saving services due to flaws in the national ID card rollout.

The three charities - the Initiative for Social and Economic Rights, Unwanted Witness and the Health Equity and Policy Initiative, estimate up to one-third of adults do not have the biometric ID card, seven years after the system was introduced.

Most of those affected are poor and marginalised such as the elderly who have been unable to claim welfare payments, as well as pregnant women who have been turned away from health centres, they said, citing research conducted last year.

The lack of a national ID has also prevented many Ugandans from opening a bank account, buying a mobile SIM card, enrolling in college, gaining formal employment and getting a passport, they added.

The three organisations filed the lawsuit on April 25, saying the mandatory use of the national ID was exclusionary and violated citizens' rights to key services.

They want the court to compel the government to accept alternative forms of identification for social and healthcare services.

Officials at the National Identification and Registration Authority (NIRA), which oversees the digital IDs, did not respond to requests for comment. They have previously acknowledged that the system needs improvement, adding that measures would be taken to increase card issuance.

Brian Kiira, programme officer at the Initiative for Social and Economic Rights, said there had been "countless problems" with the digital ID system since it was introduced in 2015.

"From its design to its implementation, the whole system is deeply flawed," he said.

"People are suffering because they cannot get an ID. We've tried to engage with the authorities, but nothing has changed. So we have no option but to take the matter to the court."

An estimated 1 billion people globally - 40% of whom live in Africa - do not have official proof of identity, greatly limiting their ability to access health, education and financial services, according to World Bank estimates.

Digital ID cards - linking biometrics such as fingerprints or iris scans to a unique identity number - have been introduced in countries such as India, Canada, Mexico, Malaysia, Germany, Ghana, Nigeria, South Africa and Chile.

India's system - the world's largest - has also been criticised for leaving out about 100 million vulnerable people, many of whom are homeless or transgender and have been denied essential services.

Research conducted by the three Ugandan charities last year said only about 12.7 million cards had been issued for a population of 18.9 million adults in 2019, citing the latest data available from NIRA.

Citizens - especially in rural areas - were unaware of how to register and faced difficulties in travelling long distances and bearing the cost of reaching a registration office, it said.

The study, which involved more than 450 interviews, also found long delays in the issuance of the cards, and a high rate of errors in the spelling of names and dates of birth, like in John's case.

As a result, at least 50,000 people over the age of 80 had mistakes on their ID cards or did not have a national ID at all, making them ineligible for senior citizen benefits, they said.

A fee of 50,000 Ugandan shillings must be paid to correct an ID - an expense that many in the East African nation can ill afford, campaigners said. More than 40% of Ugandans live on less than $1.90 per day, according to World Bank data.

Women are less likely to have an ID compared to men due to factors including lack of awareness, no opportunity to able register and having no source documents to verify their identity, said campaigners.

"The lack of access to get an ID card, the delays and bureaucracy in having it issued, and its mandatory nature have all contributed to making Uganda's ID system exclusionary," said Dorothy Mukasa, executive director at Unwanted Witness.

"Until they can sort out all the problems and allocate adequate resources to the national ID system, the government should allow other forms of identification - such as a letter from a village official which was accepted in the past."

The case is expected to be heard in the High Court of Uganda in the coming weeks.

Last year, the three charities filed a similar lawsuit against the government after it announced plans to make the IDs a requirement for COVID-19 vaccines. Before the court could rule, the Health Ministry reversed the policy.

There has been a proliferation of national ID schemes across African nations in recent years, but digital rights campaigners say they are being rolled out too quickly, often without adequate planning or resources.

"Most of these ID projects are imported and their design and implementation does not really take into account the specificities and context of the country," said Bridget Andere, Africa policy analyst at Access Now.

The biometric scanners in Uganda, for example, are often not able to read the fingerprints of elderly people as their prints have been worn out due to decades of engaging in hard labour such as agricultural work, said Andere.

"Instead of being more inclusive, these digital IDs are actually exacerbating social inequalities," she added.

(Reporting by Nita Bhalla @nitabhalla in Nairobi; Editing by Helen Popper. Please credit the Thomson Reuters Foundation, the charitable arm of Thomson Reuters, that covers the lives of people around the world who struggle to live freely or fairly. Visit http://news.trust.org)