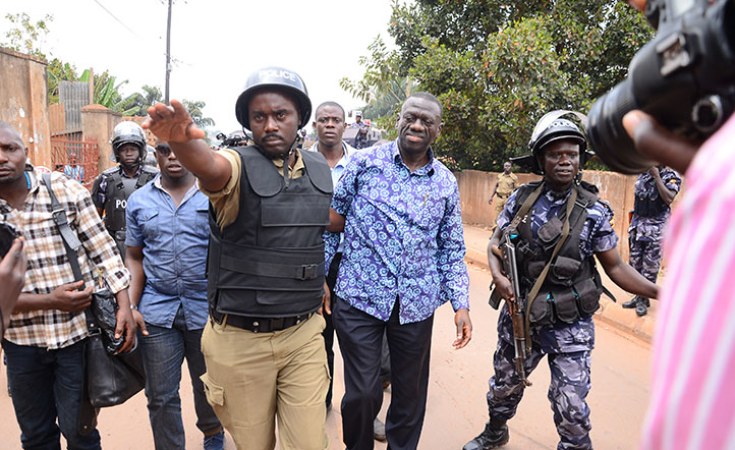 The Forum for Democratic Change(FDC) Women's League on Monday protested over the continued incarceration of their former president, Dr. Kizza Besigye who was put under preventive arrest last week.

Besigye who is also the leader of People's Front for Transition, was on Thursday last week police arrested a few meters away from his residence in Kasangati, Wakiso district foiling his planned walk to work demonstration in protest of the uncontrollable escalating prices of goods in the country.

The women who carried placards and chanted FDC slogans demanded for the unconditional release of Besigye.

The women led by Mariam Kizito said the government should do something about the escalating prices of commodities in the country.

"He [Besigye] chose to walk because he could not afford the high prices of commodities in this country and that could be the reason the police are saying he should be indoors," Kizito said.

Speaking to journalists at the party headquarters in Kampala, the deputy secretary general of FDC, Harold Kaija, asked police to release Besigye from house arrest and also remove security deployment around his home.

"We had a court order about five years ago which said it is illegal to keep Dr. Besigye [under house arrest] by the police but you wonder these poor men in uniform beating poor men who are hungry for the benefit of the rich men not in uniform and not hungry," he said.

Police spokesperson, Fred Enanga told journalists they could not allow Besigye to organise processions and assemblies in the city.

Besigye to Police - 'Remove Your Men From My Home'