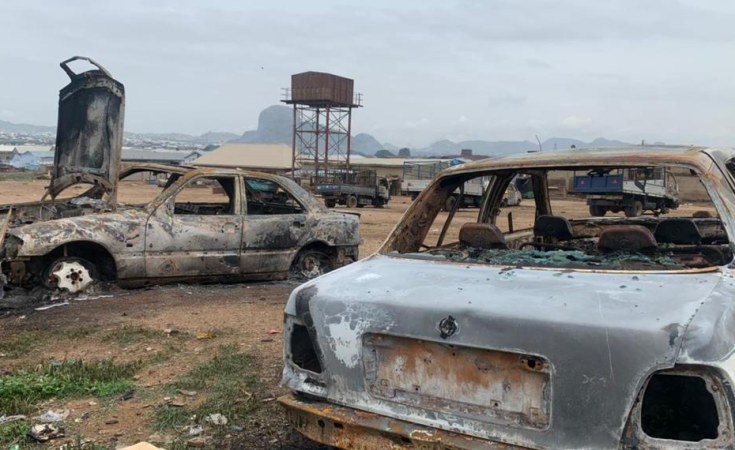 Video clips posted on social media captured smoke billowing from the market, a grim epitaph to the hours of lawlessness at the Dei-Dei Timber Market in Abuja

The day after the riot, the Timber Shed Market in the Abuja satellite town of Dei-Dei was eerily silent. The shops were shut and no trading was going on in the usually bustling facility.

A violent clash between traders and motorcycle taxi operators, known locally as okada men, degenerated into a riot on Wednesday at the facility. It began after a truck carrying domestic gas crushed a woman who fell under it from a commercial motorcycle.

Video clips posted on social media captured smoke billowing from the market, a grim epitaph of the hours of lawlessness by hoodlums. At the end of the mayhem, four other persons had been killed and timber planks and other wares worth hundreds of millions of naira had been burnt to ashes.

The market authorities confirmed the casualties when PREMIUM TIMES visited the facility on Thursday.

The Chief Imam of Abu Hurairah Mosque, Muhammed Muhammed, said the latest of the casualties died at Crown Hospital, Gwa Gwa on Thursday. He said over 30 injured persons from his side were receiving treatment in different hospitals.

"We confirmed this morning that one of our people just died at the hospital," he told this newspaper.

The Imam showed this reporter the spot close to the mosque compound from where two bodies of victims were recovered.

Witnesses interviewed by this newspaper said many of the victims of the clash knew nothing about how it started.

Emmanuel Isaac has a shop in the market in which he sells tiles. He said he was taking a customer from the shop to the main road which snaked through the market when he saw a bike rider lose control, and threw his female passenger under the truck.

"When the road safety officials came to remove the corpse and the Okada man, who also broke his legs, traders insisted that they would be the ones to carry the Okada man. But his fellow Okada men did not agree. That was how the fight broke out," he explained.

His narrative was corroborated by the Secretary of the Tomato and Onion Sellers Association, Dahihu Garba, and other witnesses who spoke to PREMIUM TIMES.

Mr Garba, a leader in the market, said the clash would have become worse if they had not prevented their people from joining the fight.

"The moment we saw that everything had gone out of hand, we called our people to order, blocking our people from leaving our side to fight outside.

"We were here inside the mosque when we heard gunshots and we knew this was not a soldier or police gun," the market secretary told this newspaper after pointing to properties torched during the riot.

He said bullets from suspected locally made guns killed two members of his association.

Although the Federal Capital Territory (FCT) minister, Mohammed Bello, ordered the indefinite closure of the Dei-Dei International Market following the unfortunate incident, some traders who claimed they had a close shave with death during the riot said they were still counting their material losses.

Amina Umar, 64, was lost in thought when this reporter approached her on Thursday morning.

Aside from losing her wares, Ms Umar's son, Adamu, a fashion designer, was shot in the stomach while trying to rescue his dying friend during the clash.

His friend was shot in the head allegedly by security operatives.

The mother said Adamu did not realise he was shot until a bystander, Sanni Idris, saw blood dripping from the right side of his stomach.

In a shop close to where Mr Umar was shot, Alhaji Mukhtari said he fled for his life when some rioters arrived to attack him.

Despite quickly locking lock it before fleeing, his shop was looted by the rioters.

Although the authorities said five persons died in the riot, some witnesses said they counted more bodies.

A casual worker at the Timber Shed, Sunday Elijah, was at the centre of the market when he saw people running helter-skelter. He said the situation was similar the to chaos he had witnessed in 2014 and 2015.

Men of the FCT Fire Service were still dousing the fire in the background as Mr Elijah spoke to PREMIUM TIMES.

Possibly in his 30s, Mr Elijah said he had been living in the market for over 15 years but had never witnessed the scale of violence in the market that he saw on Wednesday.

"I am a Christian and I have been living with these people for years in peace. The fight got worse because the soldiers and vigilante sent to calm the fight also picked sides," he alleged.

He claimed that most of the injuries suffered were inflicted by security operatives.

"Anybody that says only five died, that person is lying. Can five bodies fill a Dyna (a Toyota pickup model)?

"They (security operatives) are useless. They can't secure lives and properties. They only came to cause more commotion.

"We have soldiers, police and vigilantes who are supposed to secure lives and property. But they came to cause more commotion. Why didn't they just go for the people who caused the commotion?" Mr Elijah said, banging a Suya table he was leaning on.

He said one of his friends was killed by the rioters.

Another witness who identified himself as Mr Shamsudeen also dismissed the official figure of casualties.

The tomato seller claimed his younger brother, currently in the hospital, was shot in the leg by a police officer during the clash.

When presented with the claims of persons interviewed by this newspaper, the police spokesperson, Josephine Adeh, on Thursday, told PREMIUM TIMES that she has not been properly briefed on the incident.

Although normalcy has been restored to the area, many of the traders said they were in fear of fresh attacks.