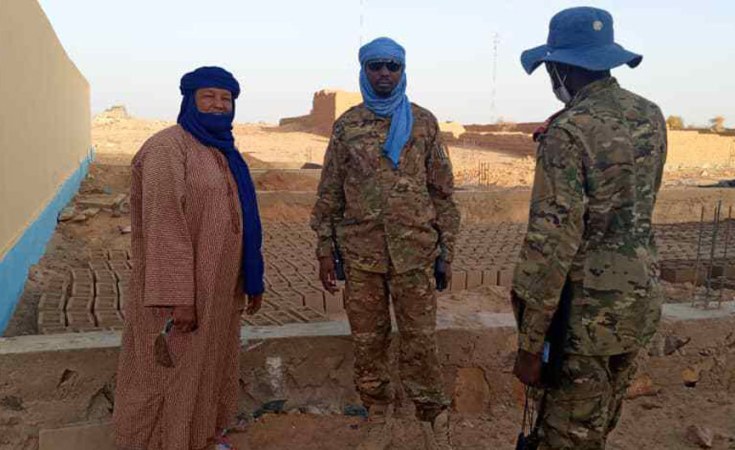 Late Captain Abdelrazakh Hamit Bahar of Chad, was named on Tuesday as the recipient of United Nations Peacekeeping's highest award, for exceptional courage, serving in Mali, which will be presented on Thursday at UN Headquarters in New York.

Captain Abdelrazakh - who joined the UN Integrated Stabilization Mission in Mali (MINUSMA) in January 2021 - was deployed at the Aguelhok Super Camp in the northeast when it was attacked by an armed terrorist group attempting to seize the base and its outposts.

He led a bold counterattack to defend the camp, protect the lives of his colleagues and prevent civilian casualties, but while attempting to secure the perimeter, Captain Abdelrazakh noticed that armed assailants were entering a house nearby.

Determined to ensure that they did not harm colleagues and the civilian population, he single-handedly led an operation to clear and secure the house, where he was shot and killed.

The incident occurred at the beginning of April last year.

An example of dedication

"Captain Abdelrazakh's willingness to risk his own life to save others exemplifies the courage and dedication of the more than one million peacekeepers who have served on the frontlines of conflict since 1948", said Under-Secretary-General for Peace Operations, Jean-Pierre Lacroix.

He added that the captain's sacrifice also highlights the increasing danger faced by UN peacekeepers as they carry out their vital work in some of the world's most challenging environments.

"Captain Abdelrazakh made the ultimate sacrifice in the pursuit of peace. We mourn his loss alongside his family, colleagues and the nation of Chad. His selfless service serves to inspire us all and we are proud to honour him", Mr. Lacroix added.

The "Captain Mbaye Diagne Medal for Exceptional Courage" will be presented to Captain Abdelrazakh's family at a ceremony in New York.

The medal was named in honour of Captain Mbaye Diagne who saved hundreds of lives while serving as a UN 'blue helmet' in Rwanda in 1994, before being killed in action.

In 2014, the top accolade was established by the UN Security Council as an official award to recognize uniformed and civilian peacekeepers who demonstrate exceptional courage. This year is only the second time that the Medal has been awarded.

A Commendation Letter from the UN Secretary-General will also be conferred upon three other peacekeepers in recognition of their courage in the line of duty.

On 2 April 2021, during an attack by armed terrorists on the Aguelhok Super Camp in Mali, the senior officer serving with MINUSMA, demonstrated true bravery by taking a lead role in a counterattack against the assailants. He succeeded in disrupting the attack and led efforts to secure a landing zone to enable the immediate emergency evacuation of 16 wounded peacekeepers.

On 30 January 2022, he was the point man during a patrol when it came under attack by the CODECO armed group in the Democratic Republic of the Congo (DRC). He served with the UN peacekeeping mission in the country, MONUSCO. During the assault, he was shot and wounded. Despite his injury, he showed extraordinary courage by continuing to return fire to deter the combatants and protect his colleagues.

In November 2021, he went above and beyond the call of duty by courageously negotiating with armed groups in South Sudan, as a senior officer with the UN peacekeeping mission in the country, UNMISS, to prevent attacks on civilians and UN personnel in Tonj. During ongoing clashes, he also provided protection and shelter to 1,300 civilians, including women, children and the elderly, at a temporary base while working with local communities to defuse tensions and restore calm.