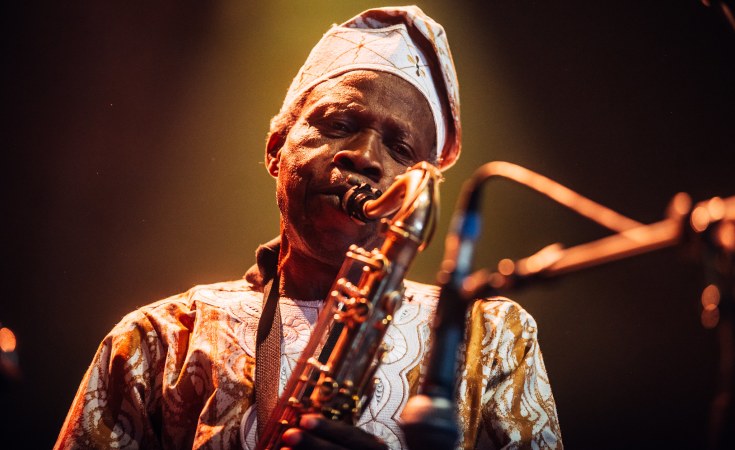 Highlife crooner and Afrobeat singer Orlando Julius Aremu Olusanya Ekemode died, according to his wife Latoya Aduke, in his sleep on 15 April 2022.

A titan of Nigerian highlife had passed on at 79.

With a career spanning almost six decades Orlando Julius stamped his foot on the sands of history, promoting his talents and laundering his country's image across the globe.

Orlando Julius played the saxophone with dexterity, and ultimately became a pioneering force behind Afrobeat music: a genre which was later adopted and promoted by the famous Fela Anikulapo Kuti.

Highlife music originated from Ghana in the early 1800s as multiple African musical fusions mixed with Western jazz melodies. It is mostly characterised by jazzy horns and multiple guitars.

However, Afrobeat is a hybrid of highlife music that developed in the 1960s and 1970s. It combines elements of West African styles such as fuji and highlife with American jazz, soul and funk.

Orlando's prowess lay in his ability to combine his native Yoruba drums with the guitar and saxophone to produce a mixture of African rhythms and soul. This combination was to become the popular Afrobeat genre which he took to Europe and the US.

Orlando was born in Ikole Ekiti, a town in the South West of Nigeria in 1943. He was educated at St. Peter's Anglican school in the same town. He also played for the school band in addition to receiving musical lessons from his mother. Following the death of his father in 1957, Orlando dropped out of school and moved to Ibadan to pursue his career in music.

He worked in a bakery while also playing drums and flutes with juju and konkoma (or konkomba) bands. Juju music is a style of Yoruba popular traditional percussion. The name originated from the Yoruba word 'juju' meaning throwing something or something being thrown. Konkoma (or konkomba) derives from the Gur people in the northern part of Ghana.

He went on to play at the now defunct political party Action Group's secretariat in Ibadan. Here he connected with a Brazilian guitarist, Romero Lubambo, who invited him to play in Ondo. By 1960, Orlando was invited by a Nigerian highlife musician Eddy Okonta to join the band Highlife. With Okonta he learned to play saxophone professionally and became a highlife-cum-Afrobeat singer.

He thus experimented variously with horns, guitar and American R&B to form a unique genre. He later left Okonta to form his own band and his first hit with Jagua Nana, a 1965 song in which a woman is compared with a Jaguar.

In the following year, 1966, Orlando released one of his biggest albums, Super Afro Soul, which further launched him as a committed singer and composer.

In the 1970s, Orlando moved to the US where he later formed a band with Hugh Masekela. Masekela was a South African trumpeter, singer and composer who was known for his jazz compositions and for writing popular anti-apartheid songs. They jointly produced two albums which they toured extensively with.

Orlando later returned to Nigeria in 1984 to continue his career in his homeland. Before returning to Nigeria, he had a stint with film by taking a role in Roots: The Second Generation, a US TV series about slavery. He also attended a film school in Oakland. But he never lost track of music as he continued to perform gigs and even opening for iconic US trumpeter and vocalist Louis Armstrong.

At the same time he had been working on albums on Nigerian labels and once back home, Orlando formed an 18-member band comprising all Nigerian stars and produced the Dance Afrobeat album. The band went on tour of the US with Lijadu Sisters.

In 2000, Orlando reproduced Super Afro Soul from 1966. He followed this up with Orlando Julius and the Afro Sounders and then Voodoo Funk in 2011. He went on tour of London in 2014 where he also collaborated with musical group The Heliocentrics to record more songs and new versions of his old tracks.

Orlando used music to promote and preserve his Yoruba culture. He entertained diverse ideologies from the outset of his career together with his African American wife. He was committed to advising his audience to live worthily by embracing the values of peace, love, justice and liberty.

He released Jaiyede Afro in 2014 which charted number 13 on Billboard World Album in the same year. In 2019, Orlando moved to Ijebu-Jesa, Osun State, Nigeria with his wife where he was honoured with a chieftaincy title of Gbeluniyi by Oba Moses Ogunsoye, the royal father of the town.