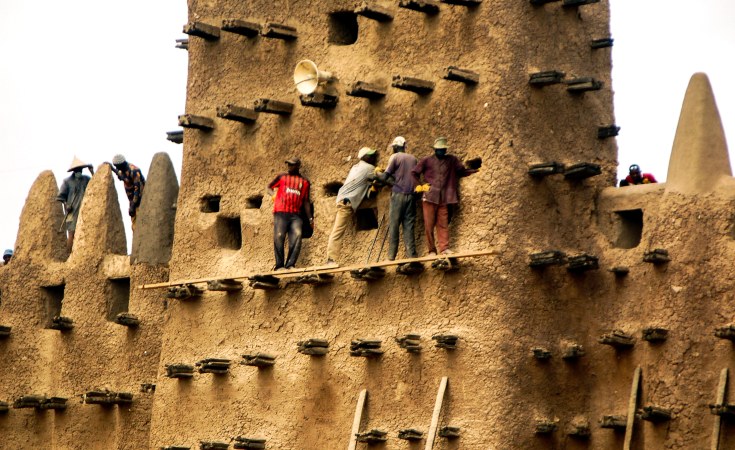 Ralf Steinberger/Flickr
Annual repair of the Great Mosque of Djenné in Mali.
Voice of America (Washington, DC)
By Annie Risemberg

Bamako, Mali — Experts say Mali's struggle against Islamist militants is putting its World Heritage sites at risk. For the first time in modern history, officials say, the annual replastering of the mud mosque in the town of Djenné in central Mali will likely be canceled because of security concerns. The concerns cast doubt onto the government's claim it is winning the fight against terrorism.

The Great Mosque of Djenné is the largest mud brick building in the world and was a main attraction in Mali's formerly thriving tourism industry.

Each year the mosque is replastered in an event known as the "crépissage." This year, the event is on the verge of cancellation for the first time, as Mali's decadelong conflict has gradually moved south into the center of the country.

A Djenné resident who wished to remain anonymous, speaking via a messaging app from Djenné, said that in recent weeks he saw ambulances circulating in town and military helicopters flying overhead, signs of unrest in neighboring villages. The Malian army said on its Twitter account this month that four soldiers were killed in a roadside bomb attack near the town.

He said that due to insecurity, village residents have decided not to hold the crépissage this year, an event he has participated in since he was a child.

Abdramane Dembele, deputy mayor of Djenné, said that the crépissage has not yet been officially canceled, but has been delayed due to insecurity. If rescheduled, it would need to be held before the rainy season begins in June. One of the objectives of the crépissage is to protect the building from rain.

Abdoulaye Deyoko is an engineer and city planner and founder of Bamako's School of Engineering, Architecture, and Urbanism, and a tireless advocate for Mali's mud architecture.

Deyoko explained that the mosque is built from "banco," a mixture of mud and small pieces of rice bran.

When it rains, he said, these small pieces have a tendency to break away. Traditionally, villagers have a celebration, a type of ritual that allows them not only to repair the mosque but to celebrate.

Deyoko said that despite this, he thinks the Djenné mosque can hold up for a year or two without the crépissage, although he said the event is important for the social life of the town, not just for technical maintenance.

The Djenné mosque and surrounding mud brick town is on the UNESCO List of World Heritage in Danger.

Ali Daou, UNESCO's culture program director in Mali, said Djenné, like all of Mali's four World Heritage sites, is in danger because of the ongoing hostilities. It is not just the threat of direct conflict, he said, but the difficulty of conducting the annual crépissage that puts the site at risk.

In recent months, Mali's military government has launched a highly publicized offensive against Islamists. Many locals, though, say that these military operations target civilians rather than extremists.

The army claimed to have killed 200 terrorists in the village of Moura in March, while residents said the majority of those killed were innocent civilians.