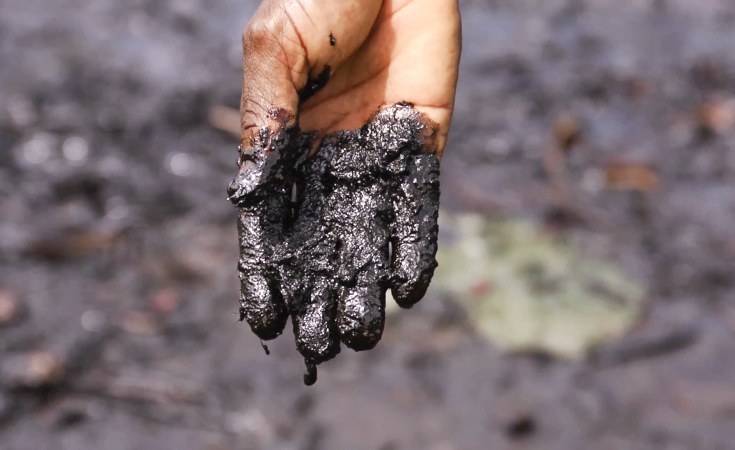 Amnesty International
Pastor Christian Lekoya Kpandei's hand covered in oily mud, Bodo Creek, in 2011. His fish farm once provided a living for about 30 families. Its collapse forced him to move to a single-room apartment, to pull his youngest child out of school and left him with no regular source of income.
Premium Times (Abuja)
By Ini Ekott

As an environmental lawyer, Chima Williams has won multiple precedent-setting cases in the last 20 years. One involved a court declaration that gas flaring in the Niger Delta violated the constitution. Another centred on a decades-long effort by a Rivers community to have Agip, the Italian multinational now known as Eni, remove its facility blamed for flooding.

In January 2021, a Dutch appeals court delivered the latest victory.

After a 13-year legal battle, the Court of Appeal of the Hague held Royal Dutch Shell responsible for oil spills in two communities in the region, agreeing with four farmers represented by Mr. Williams and lawyers in the Netherlands that as the parent company, Shell had an obligation to prevent the spills.

The landmark judgement, the first time a Dutch transnational corporation was held accountable for the violations of its subsidiary in another country, opened Shell to legal action from Nigerian communities devastated by the firm's disregard for environmental safety. As if timed, a similar ruling came a month later when the UK Supreme Court affirmed that Nigerian communities could also sue Shell in English courts.

Last Wednesday, Mr Williams, executive director of Environmental Rights Action/Friends of the Earth Nigeria, was named one of the winners of the prestigious Goldman Prize for his work - the third Nigerian to win the prize after Ken Saro Wiwa and Odigha Odigha.

The Goldman Environmental Prize, also known as the "Green Nobel Prize", is awarded to environmental activists who demonstrated sustained and significant efforts to protect and enhance the natural environment, often at great personal risk. Mr Williams joins an illustrious list of past winners from Africa that also includes Wangari Maathai, renowned Kenyan environmental and political activist, who also won the Nobel prize before her death in 2011.

Mr Williams has been involved in the fight for environmental justice for years, working with other lawyers and activists to take on oil majors accused of abuse. The Niger Delta is reputed as one of the most polluted places on earth, and the Nigerian oil industry records several oil spills annually.

It recorded more than 6,800 oil spills between 1976 and 2001, according to the United Nations Development Programme (UNDP), and two-thirds of some 3 million barrels of spilled oil were never recovered, contaminating water, farms, mangrove forests, and fisheries.

While attending the University of Benin where he studied law, Mr Williams founded the Students Environmental Assembly Nigeria in 1998, Nigeria's first-ever student-run environmental justice group. For his activism, he was jailed by the military regime of Sani Abacha, forcing him to miss two school years.

"That case was the first of its kind, the legality of gas flaring in Nigeria, something that nobody would ever have considered that can be litigated upon because for most Nigerians it's not a normal thing," Mr Williams said in an interview.

In 2005, the court upheld his argument that the law violated a constitutional provision for the right of citizens to life and dignity. Gas flaring continued nonetheless after the ruling, and in 2008, Mr Williams was held in a Shell facility and interrogated by a military taskforce after he led environmentalists and community leaders to a site that showed Shell had not ended the practice.

Years later, he worked on a case that compelled Eni and its Nigerian subsidiary, Nigeria Agip Oil Company, to pay compensation to a Bayelsa community, Elebiri, affected by oil spill. While working on the case, he succeeded in getting the company and government regulators to re-investigate the spill site.

"That was when we got to know that in the history of oil industry practices in Nigeria, it was the first time those regulators and the companies were called back to the site that they claim to have given regulatory certification as having been cleaned up," he said.

The company paid N4.5 million to the community, constructed a four-kilometre road there, in addition to upgrading its health centre and building a small electricity gas turbine.

Mr Williams and his team, sometimes including lawyers in Italy, helped another community address a flooding problem caused by a facility owned by Eni. This time, the team applied the Organisation for Economic Co-operation and Development's complaint procedure, a non-judicial mechanism for achieving remedy for corporate misconduct.

The facility had obstructed water flow for over four decades, causing periodic flooding in Aggah, a small community in Rivers State. The company is currently working on resolving the problem.

The Dutch case started after oil spills caused by Shell in 2004 and 2005 polluted farmland, drinking water and wetlands in and around Goi and Oruma. Mr Williams organised community meetings and surveys of oil spill damage and Shell's pipelines - SPDC operates more than 6,000 km of pipelines in the Niger Delta - and brought together the communities to take legal action.

Shell won the first round in 2013, prompting Mr Williams to organise an appeal. While waiting for the hearing, his legal team obtained documents revealing that Shell was aware of the poor management of the Goi pipeline and that it needed replacing. It meant the company had lied in court.

On January 29, 2021, the Court of Appeal of The Hague ruled that Shell has control over SPDC's operations and a duty to prevent oil spills, and ordered the Goi and Oruma farmers be paid compensation, while the areas are cleaned up.

One of the farmers, Eric Doo, said they were still negotiating with Shell over a year after. He said he could not disclose details of the talks but believed once the matter is resolved, clean-up will be done as directed by The Hague court.

"It is now between my lawyers and Shell's lawyers. I believe the right thing will be done," he said, praising Mr Williams for his commitment to "less privileged community like my community and for coordinating the cause that will enhance justice without demanding anything from me".

Mr Williams said the biggest challenge in holding oil majors accountable for environmental damage is poor enforcement of the decisions of courts.

"Yes, and this is what has led to self-help mechanisms being deployed. This is where the chain is broken," he said.

Oil majors Shell, ExxonMobil, and TotalEnergies who for decades were the major operators in Niger Delta, have recently announced they are divesting their assets to focus on deep-water fields away from the difficulties of operating in close proximity with local communities.

Mr Williams said he believed the decision was primarily driven by the recent court victories that showed oil majors will be held accountable in future for poor environmental practices.

"In the era of effective litigation that brings justice, communities are getting to know more about that and how to use that," he said. "So, the multinational realized that given the way they operate, they may be into more problems or trouble in the coming years so they choose to move."