Congo-Kinshasa: Civilians At Risk Amid Resurgence of M23 Rebels 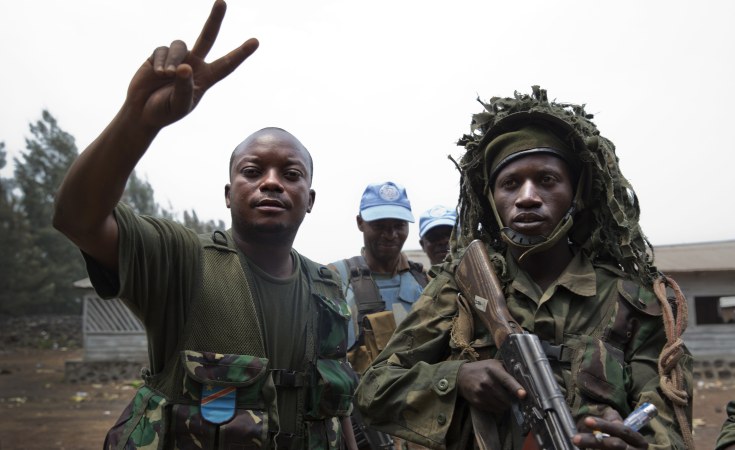 Congolese security forces and the M23 armed group in eastern Democratic Republic of Congo need to minimize harm to civilians during renewed fighting, Human Rights Watch said today. Past fighting between government forces and the rebels resulted in widespread abuses against the civilian population and prolonged humanitarian crises.

Armed conflict in North Kivu province since May 22, 2022 has forced tens of thousands of people to flee their homes, as M23 rebels launched their biggest offensive against government troops in a decade. On May 25, heavy fighting reached the outskirts of the provincial capital, Goma. The fighting in eastern Congo is bound by international humanitarian law, including Common Article 3 to the 1949 Geneva Conventions, which prohibit summary execution, rape, torture, forced recruitment, and other abuses.

"The M23 armed group was responsible for countless atrocities in the past and the renewed fighting in North Kivu raises grave concerns about the danger to civilians in the area," said Thomas Fessy, senior Congo researcher at Human Rights Watch. "All parties, including rebel forces, security forces of Congo and its neighbors, and United Nations peacekeepers, are obligated under international law to spare civilians."

Since hostilities resumed, the governments of Rwanda and Congo have exchanged accusations about the fighting. Rwanda said that the Congolese army fired rockets onto its territory, "injuring several civilians and damaging property." Congo alleged that the Rwanda Defence Force (RDF) was actively fighting alongside M23.

Rwanda has alleged that the Congolese army was collaborating with the Forces démocratiques de libération du Rwanda (Democratic Forces for the Liberation of Rwanda, or FDLR), a largely Rwandan Hutu armed group operating in Congo, some of whose members took part in the 1994 genocide in Rwanda and had attacked Rwandan forces and "kidnapped two of its soldiers while on patrol" along the border. On May 29, a Congolese military spokesman said it was holding two Rwandan soldiers "captured by the population."

The regional Expanded Joint Verification Mechanism (EJVM) of the International Conference on the Great Lakes Region (ICGLR) has said that it is preparing a report on the situation. The EJVM should make its findings public, Human Rights Watch said.

A farmer from Kibumba village, about 20 kilometers north of Goma, where some of the fighting took place, said of the return of M23: "Everybody knows how we suffer under the domination of these people, so many young people died... I don't think they can change, we can't expect anything good from them."

Human Rights Watch previously documented war crimes by M23 rebels who, supported by Rwanda and Uganda, took over large parts of North Kivu province in 2012. After M23 briefly captured Goma, UN-backed government troops in 2013 forced them back into Rwanda and Uganda. M23 fighters summarily executed dozens of civilians, raped scores of women and girls, and forcibly recruited hundreds of men and boys.

Originally, the M23 armed group consisted of soldiers who participated in a mutiny from the Congolese national army in April and May 2012. The then-UN High Commissioner for Human Rights Navi Pillay had described M23's leaders as "among the worst perpetrators of human rights abuses in [Congo], or in the world."

They included Gen. Bosco Ntaganda, who has since been convicted by the International Criminal Court for war crimes and crimes against humanity when he led another armed group, and Col. Sultani Makenga, who reportedly led this May's offensive. Congolese authorities issued arrest warrants for Makenga and other M23 senior commanders in 2013. Rwanda and Uganda never acted on extradition requests made to their countries.

Regional attempts to demobilize M23 fighters have failed over the past 10 years. The group resurfaced in November 2021, attacking Congo's army, amid claims that President Felix Tshisekedi's administration was not committed to existing peace agreements, which included amnesties for the group's rank-and-file. The agreements, however, did not include accountability for the worst human rights abusers.

Following renewed attacks by the M23 in March, tensions escalated in late April as Kenya held a first round of talks between Congo and a number of armed groups in Nairobi. Congo expelled the M23 representatives from the dialogue because of the armed group's renewed fighting on the ground. Only days before the talks opened and as Congo joined the East African Community, its member countries agreed to create a regional force to combat rebels in eastern Congo.

Any new round of talks should address, with assistance from the African Union (AU) and the UN, the demobilization of armed groups and accountability for past serious crimes, Human Rights Watch said.

In Congo, hate speech and stigmatization of communities linked to neighboring countries has been growing and sometimes linked to government officials. A government spokesman, Patrick Muyaya, condemned a video circulated on social media in which North Kivu's deputy police commander, Francois-Xavier Aba van Ang, encouraged residents to take up machetes as "war against the enemy must become people's war." But Human Rights Watch is unaware of any disciplinary action taken against van Ang.

Various foreign forces are engaged in military operations against armed groups in eastern Congo. Tshisekedi has invited Ugandan forces into the northeast for joint military operations against the Allied Democratic Forces (ADF), an Islamist armed group led by Ugandans. Burundian troops have undertaken incursions against the Burundian armed group RED-Tabara (Résistance pour un état de droit au Burundi; Resistance for the Rule of Law in Burundi), which is based in South Kivu province. The United Nations Organization Stabilization Mission in the Democratic Republic of the Congo (MONUSCO) which is providing military support to Congolese government forces, should assist civilians in need of protection, Human Rights Watch said.

On May 30, Senegalese President Macky Sall, current chair of the AU, said he had spoken to both President Tshisekedi and Rwandan President Paul Kagame, and that Angolan President João Lourenço was leading mediation efforts in his capacity as head of the ICGLR .

The current hostilities in eastern Congo should not deter the Tshisekedi administration and neighboring countries from seeking justice for abuses committed during previous armed conflict on Congolese territory, Human Rights Watch said.

"The failure of the region's governments to seek justice for commanders on all sides implicated in past atrocities heightens concerns for the safety of civilians in any future fighting," Fessy said. "Governments that assist abusive armed groups like the M23 risk becoming complicit in their crimes."