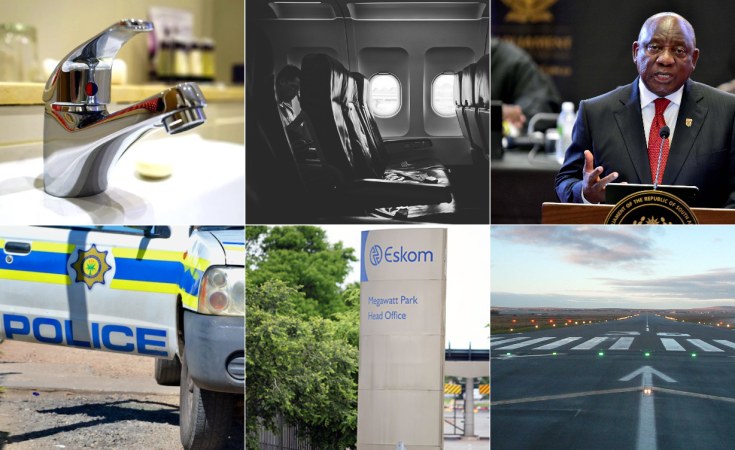 Rand Water has planned a 24-hour water shutdown to install a new pump set valve at the Vereeniging water treatment plant and it is expected to affect various parts of Johannesburg.The outage which began this morning, is expected to last until 05:00am on Saturday.

The Competition Commission has reportedly met with local airlines LIFT, Flysafair, Airlink and South African Airways in a bid to prevent price gouging while Comair flights are grounded.

Comair, which owns kulula.com and operates British Airways locally under a licence agreement, suspended its flights earlier this week as it was too short of funds to keep its planes in the air.

President Cyril Ramaphosa was joined by the Minister in the Presidency as well as the Ministers of Police, Justice and Correctional Services, and Defence and Military Veterans, in his discussions with political parties on the security situation and economic difficulties affecting citizens. The president spoke on efforts to rebuild the integrity and capability of law enforcement agencies, the operationalisation of the Border Management Agency and more effective implementation of immigration and labour laws. He also cautioned against perceptions that link migration to criminality. This is the word from the president who said: "Social and economic conditions in which South Africans lived were at the core of the crime problem in the country, alongside criminal elements keeping communities in fear."

The portfolio committee on police is shocked at the climbing levels of crime, particularly murders - up by 22.2% and rape cases- up by 13.7%. Chairperson of the portfolio committee on police Tina Joemat-Pettersson, has demanded that station commanders from the top five police stations must appear before MPs to explain the high crime rate in their areas. Joemat-Pettersson said the situation was unacceptable and the committee needed to take a firm stance against crime.

Police Minister Bheki Cele announced the crime statistics to the portfolio committee on police, for the fourth quarter today. The country has seen an increase in violent crimes such as murder and rapes, from October to December 2021. The South African Police Services are concerned that of the 6,800 people killed, some were linked to gender-based violence. Police stations are also reporting a rise in serious and violent crimes, including murder, rape and armed robberies, There has also been an increase in kidnappings in the country. A further spike in these crimes in 2022 will not paint a good picture in the next briefing.

Eskom's Solar Power Deal to Add to Grid In 2023

The government has signed a solar power deal with Oslo-based firm Scatec ASA that will see 150 megawatts of power added to the Eskom grid next year.  Government's emergency power programme, also known as the risk mitigation programme, has experienced multiple delays as the nation heads for a record year of electricity cuts in 2022 because state-owned utility Eskom Holdings SOC Ltd is unable to meet demand. This is part of the government's programme to source new power options, that were promised by Minerals and Energy Minister Gwede Mantashe in 2019 but which has not been taken up. This includes the plan to source 2,000 megawatts - a bid that was won by Turkish firm Kapowership, a supplier of floating gas-fired plants. The firm is locked in a legal battle in South Africa after environmental impact studies showed that harm would be caused to the ocean and sea life, after it was given the green light to operate. The court battle still looms.

South Africans Living In UK Forced to Answer Quiz In Afrikaans Before Allowed to Board Flights to Ireland?