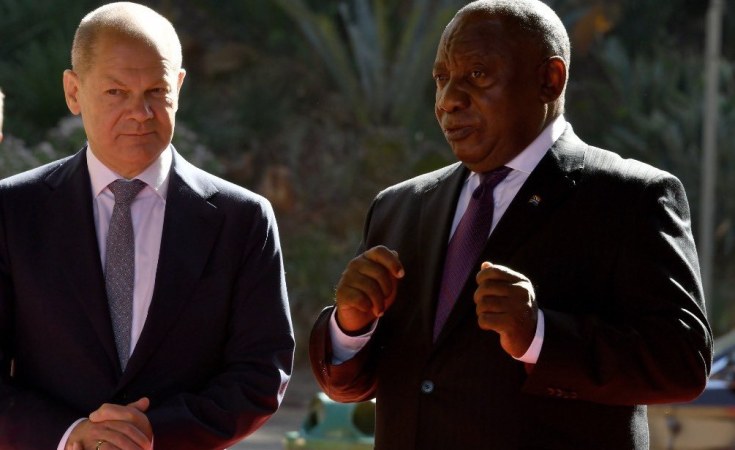 SA Govt
The war in Ukraine was among the topics discussed by South Africa's President Cyril Ramaphosa and German Chancellor Olaf Scholz in South Africa in May.
Nile Post News (Kampala)
By Crispus Mugisha

President Yoweri Museveni has called for negotiations between Russia and Ukraine and said everybody who wants peace in the world should support this position so that the fighting can stop and safety restored for all.

"We think the best way is to negotiate. This is the best way and everybody who wants peace in the world should support this so that this fighting stops and you get balanced peace that ensures safety for all," he said.

The President was speaking to the former President of Russia and current Chairman of the United Russian Party H.E Dmitry Medvedev via a zoom call recently during which he also expressed Uganda's gratitude to the Soviet Union for the support rendered to Africa during the anti-colonial endeavours in the 1960s and for facilitating Uganda's nation-building processes through trade, agriculture, Industry and security support.

Regarding other co-operations, President Museveni said Uganda is ready to cooperate with Russia in many areas including vaccine development through scientific cooperation.

"We are ready to cooperate in vaccine development and other scientific co-operation. We are very much interested and we are already co-operating with Russia in many areas," he said.

President Museveni said Uganda has always worked with the Communist Party of the Soviet Union despite not having a Communist program here.

The President gave an in-depth history of Uganda's relationship with Russia since 1917 saying the Communist Party of the Soviet Union was supporting Africa in the anti-colonial struggle and was the only force outside supporting us.

President Museveni said Uganda is working with Russia on other frontiers including in Agro-processing.

"Our two areas are complementary, the Russian Zone is cold some parts of the year, and our part of the world is always warm. So we can always produce products which you need and what we need. That trade should grow," he said.

On the issue of the International situation, President Museveni said Uganda abstained and took a neutral position.

H.E Dmitry Medvedev said the relationship between the two countries is dynamically developing and described the inter-party agreement as a very significant interparty event.

"We aim to continue adopting, following the same cause agenda to develop. To continue developing and supporting sovereign policies, supporting positive bilateral relations with all our friendly countries on the African continent and especially Uganda," he said.

H.E Dmitry Medvedev said they would continue developing and strengthening bilateral relations in the economic sector.

"I would like you to know that we greatly appreciate our interaction in International Institutions where we are participants, first of all, this is the United Nations and also we value your well-balanced position on International agenda issues," he said.

H.E Dmitry Medvedev briefed the President on the conflict between Russia and Ukraine and said that they are prepared for peaceful negotiations.

In reference to the African continent and food security, H.E Dmitry Medvedev called for discussions at the government platforms.

"Certainly we are all concerned with the situation developing in the food sector. The last part of 7 years saw a dramatic rise in pricing, poor harvests and systematic mistakes that led to the fewer foodstuffs in the market and growing prices. This was also exacerbated by the poor food reserves," he said.

H.E Dmitry Medvedev said the conflict coupled with the overall situation in the world including food security and safety, diseases pandemics because of the new coronavirus infections, and new diseases that are posing a threat to humanity have been challenging to the world.