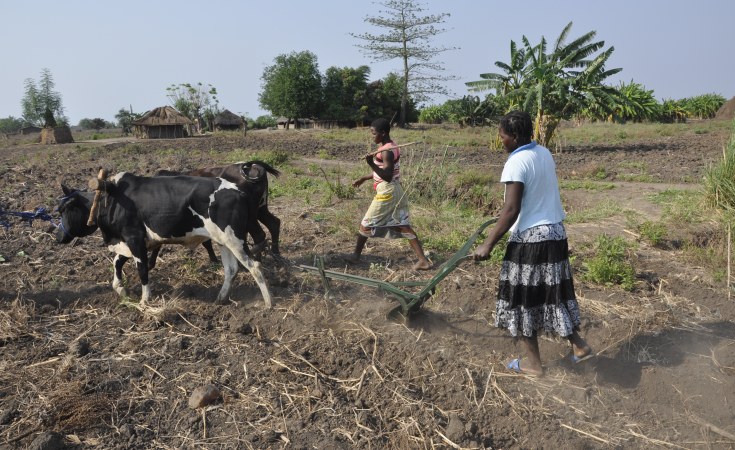 Marcos Villalta / Save the Children
Ploughing with an ox.
New Frame (Johannesburg)
By Anna Majavu

Research has found that new climate change resilience techniques must be based on a respect for indigenous knowledge if small-scale farmers are to take up these methods successfully.

New agricultural methods to build climate change resilience for small-scale farmers will fall flat unless they are deeply respectful of indigenous knowledge systems, research has found.

Farmer and Tshwane University of Technology lecturer Brian Mandipaza researched the practice of conservation agriculture that was introduced to about 120 000 farmers in Zimbabwe in 2009. Conservation agriculture is a "no-plough" minimal mechanical soil disturbance technique in which small-scale crop farmers dig large basins in the soil by hand with hoes. The basins are then covered during the dry season with manure or compost, and planted with seeds ahead of the rainy season. The practice promises greatly improved soil fertility and crop yields, and helps prevent soil erosion and water runoff.

But conservation agriculture is very different to Zimbabwean small-scale farmers' conventional practices. Farmers use ploughs drawn by oxen, plant seeds, harvest their crops, then allow their livestock to roam freely across the fields, grazing on the leftover mielie leaves and stalks, before ploughing and planting again.

Mandipaza's self-funded doctoral research focused on his home ward, Ward 30, in Zimbabwe's Nyanga area. It is a cool and mountainous region bordering Mozambique that is renowned for its timber, potatoes, stone fruits, flowers and mushrooms.

Mandipaza grew up on one of the small farms, with his mother as the main farmer in the family, planting crops and raising cattle, goats and chickens.

A return to tradition

The area is the site of a post-independence government "intensive resettlement" scheme that aimed to modernise smallholder agriculture by providing communal equipment for farming. This included dip tanks for livestock every 6km, rural service centres, hospitals and development workers, one agriculture extension officer for every 200 families and animal health specialists based in the area.

When Zimbabwe was under white minority rule, land in the area was owned mainly by large-scale commercial farmers who grew flowers and fruit. Under the post-independence resettlement scheme, each household was allocated a half-hectare residential plot, five hectares of arable land, communal grazing land and water points, and other social services. Tenure is in the form of permits.

Mandipaza found that farmers in the study area enthusiastically took up conservation agriculture when it was first introduced by global non-governmental organisations (NGOs), who provided the equipment to get started.

"In Zimbabwe, most rural households can no longer guarantee food security from their own production, leaving them extremely dependent on external aid," said Mandipaza.

However, the farmers largely discarded conservation agriculture within a few years, returning to the traditional farming methods they had used over centuries.

The main reason they reverted was because the project was designed in a way that did not recognise local cultural practices or indigenous knowledge systems developed by farmers based on their lived experiences. "Agriculture is not only about seeds and soil, sun and rain, but also about the people who plan and produce each season's crop. Whether he or she tills half a hectare or a thousand, each farmer is guided by the norms of his or her culture," Mandipaza found.

For example, the farmers had never used herbicides and were unimpressed that conservation agriculture insisted on these as necessary to kill weeds. The "weeds" in question were actually indigenous, immune-boosting, leafy vegetables that thrive in heat and drought. "Women and widows sell these vegetables to enhance their livelihoods, and the money is used for household needs, like medical and school fees," said Mandipaza.

Farmer Sekuru Kadzirange pointed out that "one of the reasons why you people of today are always hospital guests is because you don't like these traditional leafy vegetables because you think it's backward. We decided to abandon conservation agriculture because we saw that once we apply herbicides then we would not have traditional leafy vegetables the entire farming season," she said.

This conflicts with the practice in the area, which is that after the harvest, farmers rest or travel to cities to visit spouses working away from home. The crop residue is left in the fields, which are opened up for cattle from the whole area to graze on freely. The crop residue not only keeps the cattle fed, strong and healthy, but provides free manure for the farmers who cannot afford fertiliser and cements cordial relations between families, Mandipaza found.

He also found that small-scale farmers who sometimes have no resources apart from their land and the seeds they save are unable to adopt new technologies that cost money and might not succeed. And so when the NGO stopped subsidising conservation agriculture after two years, the farmers could not take a chance on spending the money to continue without guarantees of success.

Farmers said their lives improved more by setting up a stokvel than through changing their farming methods. Previously, families who didn't own oxen to pull ploughs had to work on other farmers' land in exchange for "draught power" for their own farms - meaning they only started their own planting late and didn't get a good harvest.

"If we had not got draught power and a plough, we would have died of poverty. Even when conservation agriculture was introduced, we did not attend a single meeting because we are content with how we are farming and what we are producing in our fields. We are a true testimony that there is no technology or innovation that will come near using a plough and draught power. Ours is a rags to riches story, thanks to the plough," said farmer Casper Mugoni.

The research sounds a cautionary note to climate change scientists and NGOs who sometimes "assume a simplistic technology versus choice relationship where farmers evaluate the technology and choose what to adopt and what not to adopt". Instead, they must incorporate indigenous knowledge systems, which include cultural beliefs, into any new climate change resilience practices they design, said Mandipaza.

In the meantime, the farmers are aware that they will need to adapt to the changing climate, particularly to the dry spells that start after crops have already been planted, leading to crop failure.

"This is not new here. We are getting used to this," said farmer Mbuya Chipadze.