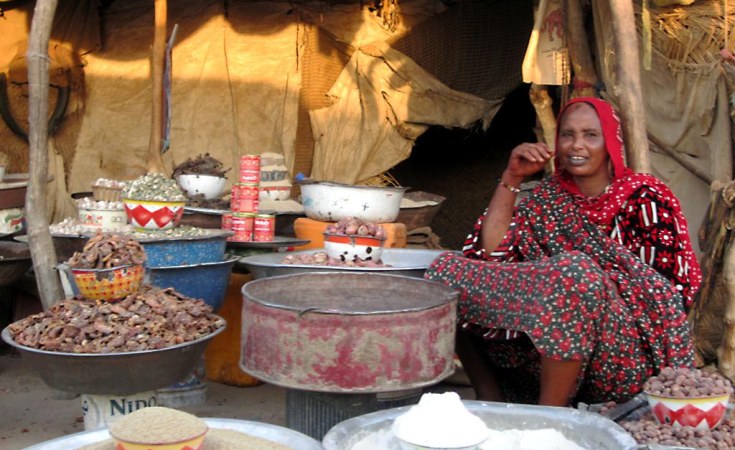 David Stanley / Flickr (CC BY 2.0)
A woman vendor in a market at Kalait between Abeche and Fada in northeastern Chad in September 2015.
Deutsche Welle (Bonn)
By Blaise Dariustone (Chad), Gazali Abdou (Niger)

Chad's transitional government has declared a food and nutrition emergency in the wake of the Ukraine war and a poor harvest. In neighboring Niger and much of the African continent, food insecurity is skyrocketing.

Last week, Chad declared a food emergency due to a lack of grain supplies.

The landlocked African nation on Thursday urged the international community to help its population cope with rising food insecurity.

Cereal prices across Africa surged because of the slump in exports from Ukraine -- a consequence of the war in Ukraine and a raft of international sanctions on Russia which have disrupted supplies of fertilizer, wheat and other commodities from both Russia and Ukraine.

DW spoke with one couple in Chad who are dealing with the effects of Russia's invasion of Ukraine.

Non-Assoum -- who had just returned from the market -- expressed her dissatisfaction with rising food prices.

She told DW that in the past, the same purchase would have cost around 2,000 CFA francs.

Less food for the family

The dire situation has forced Toralta to take drastic nutrition measures that are not without consequences.

"We can't make ends meet, even though I decided to increase our food ration by 30,000 CFA francs. So I'm forced to reduce the amount we eat every day -- and you see it's affecting the children," Toralta told DW.

"We need urgent food aid for the population," Non-Assoum said, stressing the urgency.

"If even the middle-income population in the capital can't cope with this situation, how can the rural population? It's very complicated, and we need the international community to help us."

On Friday, the UN's Food and Agriculture Organization (FAO) reported that international wheat prices had risen for a fourth consecutive month -- up 5.6% in May alone.

And the UN Office for the Coordination of Humanitarian Action (OCHA) recently warned that one-third of Chad -- about 5.5 million people -- urgently needs humanitarian assistance.

The government faulted for not acting fast

According to Daouda El Hadj Adam, secretary-general of Chad's consumer rights association, the country's transitional government should have acted early enough to prevent a food emergency.

"The government could have made this decision very early and taken consistent action," he said, adding that extra measures need to be taken beyond food aid support.

"First, we have agricultural production that is in deficit year after year due to climate change. Secondly, it's the failure of agricultural policy in our country."

He lamented that the bodies entrusted with supporting the agricultural sector do not function, do not have financial means, and do not have resources.

For example, even though the budgets have been approved, the National Agency for Rural Development Support (ANADER) and the Chadian Institute of Agronomic Research for Development (ITRAD), which deals with research, do not have sufficient resources to carry out their operations.

"The situation has worsened due to the combination of climate change and bad [farming] seasons," El Hadj Adam added.

Since the beginning of the Russian invasion of Ukraine, the prices of basic necessities have risen significantly in Chad's neighbor to the northwest, Niger.

Milk, sugar, oil and flour are the products whose prices have skyrocketed there. The cost of fertilizer has also increased dramatically.

At a recent meeting with Russian President Vladimir Putin, the African Union chairperson, Macky Sall, said the continent was bearing the brunt of the war in Ukraine due to a shortage of grain and fertilizer.

In the village of Falke, some 665 kilometers (413 miles) from the capital Niamey, Tassiou Adamou, a farmer, told DW that this year's harvest will likely be poor because producers cannot afford to buy enough fertilizer.

"Groundnuts, which are our main cash crop, need fertilizer," Adamou pointed out.

"Until last season, a bag of fertilizer cost 17,000 CFA francs. This year, it has reached 30,000," he said, adding that it is impossible to produce much for those in the countryside.

Bracing for tough times ahead

"If you used to use three bags of fertilizer for your field, today, you can only have one bag with the same amount. Where you used to harvest 50 bunches of millet, you can barely produce 30 bunches without fertilizer."

People in Niger, Chad, and many in the continent have difficulty making ends meet. As a result, many are now turning to their savings or cutting down costs to deal with rising inflation.

"When you walk through the cities, you see too many beggars," Chadian consumer rights activist El Hadj Adam said.

"As for those who work, their purchasing power is affected because they have to take care of other people even more."

In most African cities, prices in the markets have gone up by more than 30% and 40%. Price increases aside, it is doubtful whether the continent will have a supply of grains from Ukraine, such as millet and wheat, which are widely consumed.

Kossivi Tiassou contributed to this article which was edited by Keith Walker.