Cameroon: Locusts in Cameroon - From Pest to Seasonal Asset 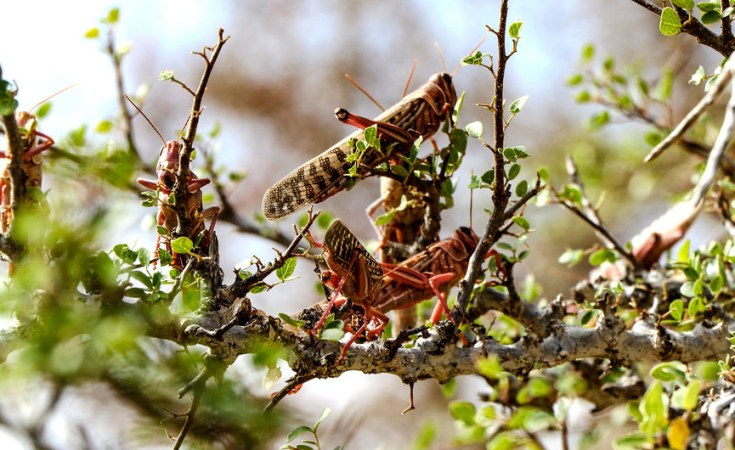 A seasonal grasshopper, known as mungwin by Cameroonians, saved Solange Ngwari's life and allowed her to send her daughter Mbah back to school. The two lost their home in Batibo, in Cameroon's north-west region, when the Anglophone crisis worsened in 2017.

What started out as a rallying cry for better treatment of the marginalised English-speaking minority in the central African nation has deteriorated into a civil war. Continuous fighting between armed separatists seeking to carve out an independent English-speaking state called Ambazonia and government troops defending Cameroon's Francophone majority has left a trail of widespread devastation. Some 2.2 million people have been affected by the bloody conflict according to the UN Office for the Coordination of Humanitarian Affairs. The lives of many - especially women and children - have been turned upside down.

Mbah, 17, and her mother are among the victims of the conflict. When the Anglophone crisis erupted in 2016, Mbah and her mother stayed put in their native Batibo to see if the tensions would eventually subside. They didn't, and the pair had to flee to the capital Yaoundé, some 400km away, for their safety.

Mbah, who was 12 at the time, had been out of school for three years after separatists closed schools in the English-speaking parts of Cameroon in 2017. Some 700 000 children continue to suffer from the impact of attacks against education.

When Mbah and her mother settled in Yaoundé, they sold mungwin. Ngwari has been engaged in the small-scale commercialisation of the edible insect, whose season is from October to December, for the past three years. It is thanks to this business that each year she is able to pay fees, buy exercise and text books, and cover other expenses amounting to R5 500 for her daughter's education. Mbah often helps her mother by hawking mungwin in the Obili neighbourhood after classes during the locust season.

Mungwin is an insect that's tricky to harvest but victims of the Anglophone crisis have turned to it for survival, and in doing so have found innovative ways to trap the insects. They have shunned the use of insecticides.

In one of the harvesting sites in Bambui on the outskirts of the regional capital Bamenda, corrugated aluminium sheets are nailed vertically in a V shape onto wooden sticks, leaving a 20cm gap at the bottom. Below the sheets are rusty metallic barrels that serve as receptacles. The set-up is furnished with several high-capacity fluorescent bulbs, which give a stadium glow.

During the mungwin season, usually at full moon, swarms of the insect are attracted by the dazzling lights. As the insects dance wildly around the bulbs, the trappers sprinkle water or use smoke from burning dry plants to daze the mungwin. In their dizzy state, they crash into the aluminium sheet and slide straight into the receptacle where they are trapped. As the mungwins smash into the sheets, the sound they produce is like hail falling on a rooftop. As the sound becomes thunderous, so too does the smile on the faces of the people harvesting.

A trapping site covering approximately 250m² costs between R7 000 and R12 000, a sum few can afford. For mungwin harvesters such as Seveline Fuam, 21, who can't establish a trapping site of their own, they have to depend on the benevolence of established trappers. They are allowed to scout around for escapees that have deflected off the receptacles. And the harvest is always great thanks to the superb lighting that attracts so many mungwin they can't all fall into the drums beneath.

Fuam has not always been an insect hunter. She was pursuing her high school studies. But when soldiers raided her village in Belo in search of separatist fighters in 2018, more than 15 civilians were killed in the crossfire and many houses were set alight. The main market in her hometown was forced to close and life came to a standstill. She left, heading south.

"When I ran away from my village due to the crisis and came to Bambui, I was again hit by another crisis - a financial crisis. I had serious problems with accommodation and feeding. At one point, I thought I should go back to my village. But the thoughts of where to begin and my safety back there scared me," says Fuam.

In a strange land with nothing on which to cling, Fuam and her two siblings resorted to menial work to afford food and shelter. They each earn as little as R60 after a whole day's work. But things changed when she started harvesting mungwin.

Though she couldn't set up a trapping site, she was still able to catch enough to fill a 15 litre or 20 litre bucket each day. This, she sold at between R150 and R200, depending on the market.

"I was smarter than all the other people. I always had it in mind that I was out all night to change the financial situation of the family. I thought of the difficulties those I left back home were going through and knew that I had to do better," Fuam says.

For internally displaced people like Fuam, every mungwin season comes with hope. They are sure to make quick cash with little effort compared to daily odd jobs. Fuam says she was able to catch and sell mungwin every day throughout the last season.

"An average daily income of FCFA 6 000 [R150] daily for almost two months meant that my situation was sure to change," she says. Through the sale of mungwin, Fuam has been able to raise enough money to enrol in learning a trade. She hopes that by the end of her training in tailoring, she will have a stable source of income. "I actually pray that [the mungwin don't] stop falling so I can just continue catching and selling," she says.

Geraldine Nange, who escaped the violence in the town of Fundong in 2019, has been making a fortune out of mungwin. "It was risky to leave my younger ones by themselves at home all night. So, I was buying it raw from someone, and then taking time with my younger ones to wash, disinfect, boil and pluck ... before proceeding with the spicing, frying and parcelling for marketing," she says.

The Bamenda-based Nange makes an average profit of R750 each day, which goes up to R1 000 in busy periods. Besides enabling her to pay for her accommodation and food, Nange has used the proceeds from the mungwin business to expand her shoe-making factory. She now buys materials for her shoe business in bulk, cutting on transportation and production costs.

While Nange focuses on mungwin processing on a small scale, others such as Lum Rina Ford, a gender activist, have taken the business to greater levels. Ford runs a girl's association for social cohesion, known as Girl on Heels. When she expanded her mungwin processing business in 2021 by raising her capital to R25 500, she brought on 20 women and girls.

"I had a neighbour who was displaced by the crisis from Kumbo. She was a single mother with four kids. When she was leaving Kumbo, some relatives of hers had to run away [into the bushes]. So, they sent their children with her. They were living 10 altogether in a very small house," Ford says.

The situation was so pitiful that Ford decided to offer the family a contract to pluck the mungwin. "They made close to FCFA 100 000 [about R2 500]. The money helped them buy basic needs, including school books for the children during the second term."

Ford herself has been one of the biggest beneficiaries of mungwin. After branding her mungwin "Rina's Crunchy", she now takes orders from as far as the United States. Her returns on investment have helped her to buy her first car.

Mungwin has indeed been a blessing to people in or from the restive north-west region in troubled times. One internally displaced person at City Chemist Roundabout in Bamenda was overheard early this year describing the edible insects as manna from heaven. "Mungwin is so sweet. I think it is the only thing still keeping me in this country."