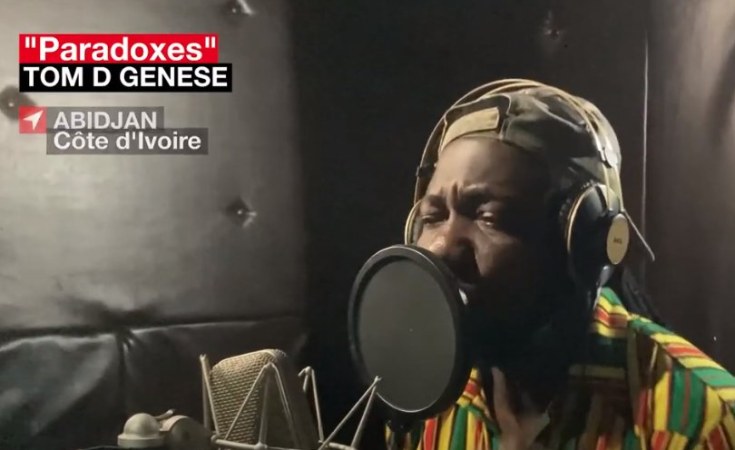 Not one to shy away from his reggae roots in calling out social problems, Côte d'Ivoire recording artist Tom D Genese's latest song, "Paradoxes", evokes Africa's richness and poverty in the same breath.

In "Paradoxes," Genese speaks of the richness of the African continent: diamonds, gold, manganese, coltan, as well as cotton, coffee, cocoa and cashews.

"Why does Africa, which is so rich, have a population that is so poor? We have to sound the alarm on this," he tells RFI from his recording studio in Abidjan.

"Life has to be more equal, so every person can live comfortably. That's what I'm talking about in this song," he adds.

RFI got an exclusive preview of Tom D Genese's "Paradoxes" which features in his upcoming album "Dihamin". The song begins with a griot, a West African storyteller-historian, who speaks in Malinké of the riches and anger on the continent in light of such a paradox.

This is part of his pan-Africanist view of society as a whole--the name of the new album "Dihamin", means "the world is like this" in Lobiri, a language spoken in northeastern Côte d'Ivoire, Ghana, and Burkina Faso.

"It's a bit philosophical, about things that are around us that we can't understand," says Genese.

Genese finds inspiration in the world around him, particularly his own community. Previous albums have included the hit, "If you are done, you have to leave" ("Si tu est fini il faut partir"), directed at African politicians.

"In the song, I said, clearly, when you've finished your mandate, you must go, and someone else will take your place, and so on," he says.

"We have democracy, and peace, because we don't want war. We don't want bodies on the streets, or death for no reason," he adds.

The song was not well-received in the Ivorian presidential palace, but that's fine for Genese.

"We are modern philosophers who make reggae music. Politicians don't necessarily like our music, because it's our role to criticise, and their role is not to like it," he says.

The singer-songwriter takes pride in his "hard and pure" special reggae that has roots in Jamaica and on the African continent.

Tom D Genese is one of the few African reggae artists who use the kora, a traditional West African stringed instrument, in their reggae songs, blending the typical base guitar, keyboard and drums with African instruments.

"It's reggae at the African source. Ya mon," he says.

Heard exclusively on RFI, "Paradoxes" by Tom D Genese, from his album "Dihamin", is out in the Autumn.