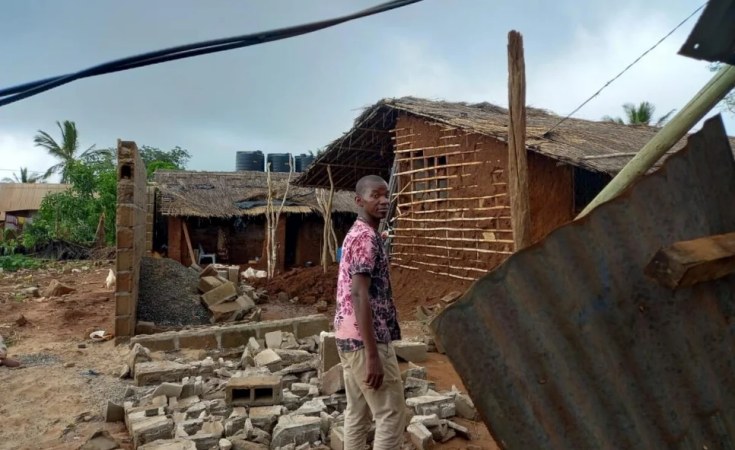 Developing countries are losing wealth as they are hit by extreme weather and rising seas, says V20, amid calls for a new fund to direct money to repair the damage fast

Tussle over loss and damage at Bonn climate talks

The surging costs of climate change-driven destruction have made vulnerable nations poorer by about one-fifth, 55 such countries said on Wednesday, as fears grow that U.N. discussions on money for states to repair and avoid harm could become a "talk shop".

"Loss and damage" caused by more extreme weather and rising seas is a key issue at mid-year U.N. climate talks in the German city of Bonn, as negotiators launched a three-year dialogue this week on a topic that has long divided rich and poorer economies.

The "Glasgow Dialogue" emerged after a push for a new loss-and-damage fund for vulnerable countries floundered at the U.N. COP26 summit in Scotland last year due to resistance from donors including the United States and some European governments.

But small island states and other countries that are already bearing the brunt of a warming world - from more powerful storms in Madagascar to disappearing islets in the Marshall Islands - urged wealthy governments not to hold back progress in Bonn.

"We ask in particular that we do not just have another talk shop on finance for addressing climate impacts," said Ralph Regenvanu, a parliamentarian from Vanuatu, a Pacific island nation grappling with frequent cyclones and rising seas.

If the dialogue does not result in real action on getting money moving to the most vulnerable people, it "will fail", the opposition leader warned ahead of the June 6-16 climate talks.

The Bonn conference got off to a tense start this week, as developing and advanced economies tussled over whether and how to include the "Glasgow Dialogue" on the official U.N. agenda.

Green groups fear push-back on that signals a lack of commitment by donor countries to provide new funding.

Harjeet Singh, a senior advisor with Climate Action Network International, which represents more than 1,500 civil society groups, said the dialogue should set up a financing facility at a U.N. summit this November and start to deliver money in 2024.

"We do not want three years of only talking which doesn't lead to any action or any real help to people on the ground who are suffering right now," he told journalists on Tuesday.

A flagship U.N. science report in February said climate change-driven losses are already happening and are set to become much worse if measures to curb emissions from fossil fuel use worldwide are not dramatically stepped up.

Climate-vulnerable nations have long grappled with the slow pace of progress at U.N. negotiations, with their key demands - including more finance to adapt to climate change and compensation for losses and damages - going largely unmet.

New studies this week laid out the extensive impacts and costs they are suffering as the planet heats up.

A report on 55 economies hit hard by climate change - from Bangladesh to Kenya to South Sudan - found they had lost about $525 billion - or 20% of their wealth on average - in the last two decades due to the impacts of global warming.

These losses cut their economic growth by an average of 1% each year, according to the study, based on models that measure losses associated with changing rainfall patterns and temperatures compared to scenarios without such climate impacts.

The findings underscore the urgent need for countries to redouble their efforts to avert and recover from loss and damage, said Sara Jane Ahmed, finance advisor for the Vulnerable Twenty Group (V20) of 55 countries that released the study.

"Breaching the 1.5 degree-Celsius (global warming) survival limit of the Paris Agreement will spell more wealth destruction and devastation for the most climate-vulnerable economies," she told the Thomson Reuters Foundation.

The V20 has set up a small loss and damage fund to test how such a mechanism could help communities and will showcase the results at November's COP27 climate summit in Egypt.

Meanwhile, the amount of money needed for U.N. humanitarian aid in response to weather extremes such as floods and drought has skyrocketed more than 800% over the last 20 years and donors are struggling to keep up, an analysis by charity Oxfam showed.

"What these increased funding needs reflect is a new reality ... in which millions more people are facing critical threats to health, to safety, to security (and) to their wellbeing because of climate change," Tracy Carty, climate policy lead for Oxfam GB, told journalists.

Extreme weather is hitting more often and compounding the effects of conflict, displacement, poverty and other crises that make it harder for communities to cope with climate shocks. That is putting the global aid system under greater strain.

"The humanitarian system is failing to keep up," Carty added, calling for a "fair system" to pay for growing loss and damage.

Opening the Bonn talks on Monday, outgoing U.N. climate chief Patricia Espinosa said it was time to address loss and damage "in an open, constructive and respectful manner", and called for progress ahead of the COP27 summit.

Other groupings, including the 39-member Alliance of Small Island States and the 46 least-developed countries (LDCs), also repeated their demands this week for a dedicated financing facility to help countries ravaged by climate change impacts.

They urged the developed world - which is responsible for most historical planet-heating emissions - to close the funding gap so that the burden of climate change does not unfairly fall on poorer communities around the globe.

"A failure to cut emissions and provide adequate finance for adaptation is increasingly causing loss and damage in our countries, and we're paying for it," said Madeleine Diouf Sarr of Senegal, which represents the LDC group in Bonn.