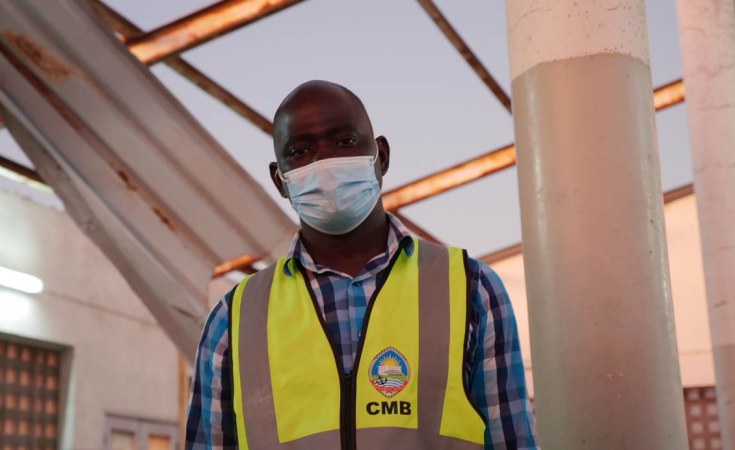 Beira, Mozambique/Washington — In climate-vulnerable nations, city mayors say they need cash and a bigger say in forging policies to deal with displacement caused by drought, storms and flooding

When Mozambican fishmonger Manuel Machava hears the fishermen have landed a bumper catch of mackerel, crabs or shrimp, he has mixed feelings - pleased for their good fortune, but worried about how he can sell their haul before it perishes.

More than three years since Cyclone Idai devastated the fish market in the city of Beira, Machava and fellow stallholders are still doing business in makeshift plastic shelters that are poorly equipped and provide little respite from the hot sun.

"We're losing up to two tonnes of fresh produce per day," Machava, 52, coordinator for Beira's fishing community, said from inside the Praia Nova fish market, which is now slated for repair thanks to a grant aimed at helping cities address climate-driven displacement.

Beira's fishing community - a pillar of the local economy - was hit hard by Idai, which killed hundreds of people across southern Africa, displacing thousands more and causing millions of dollars in damage in poor countries including Mozambique.

Idai has been followed by a further three tropical cyclones to date.

Today, officials in the Indian Ocean city are planning to use the new funding to try to relocate hundreds of fishing families at risk of future flooding - encouraging them to move to safer ground with promises of new equipment, refrigerators and road access.

Their efforts reflect increasing global concern over how extreme weather fuelled by climate change - storms, droughts and flooding - is driving millions of people from their homes.

At a U.N. meeting last month, governments came together for the first time to review a 2018 global migration agreement, with city mayors from around the world gathering on the sidelines to discuss their experiences of climate-related displacement.

About 2,000 people arrive in Bangladesh's capital every day, driven from their homes by rising sea levels and farmland flooding, said Dhaka North Mayor Mohammad Atiqul Islam, one of nearly a dozen mayors who attended the forum.

The influx creates an opportunity for the city's future economic growth, but also poses numerous short-term challenges, he said.

"(It) creates extra pressure on our environment and ability to deliver services ... Where are they going to stay?" he told the Thomson Reuters Foundation by phone.

Islam's administration receives support from the Bangladeshi government, but he said cities like his lack direct access to global climate funding, especially for adaptation measures, and need a bigger say on how to respond to sudden population shifts.

Climate change could prompt 216 million people to move within their countries by mid-century, including 86 million in sub-Saharan Africa alone, according to a World Bank estimate from last year.

Yet while many national governments continue to see climate migration as a problem of the future, according to an analysis by the Center for Global Development, a U.S.-based think-tank, officials in cities worldwide say it is already wreaking havoc.

Kim Harrisberg / Thomson Reuters Foundation
Frozen fish and meat in the freezer at the Praia Nova fish market in Beira, Mozambique. May 27, 2022.

"This is reality," Freetown Mayor Yvonne Aki-Sawyerr said by phone. "Women who used to be farmers ... are (now) living in informal settlements trying to sell mangoes because they can no longer sustain their livelihoods."

Sierra Leone's capital has limited ability to respond, she said, being hamstrung in accessing financing and even on local regulation, with issues such as land use planning and building permits overseen by the national government.

"But when the floods happen, (local residents) look to the city council," said Aki-Sawyerr, who along with other mayors, presented such concerns to U.N. officials in New York.

Beira was one of five cities facing climate displacement to receive funding from the Mayors Migration Council (MMC), a mayor-led advisory organisation that met on the sidelines of last month's U.N. gathering.

Five more will be announced at the COP27 climate summit in November.

The coronavirus pandemic has highlighted the importance of local leaders in responding to the needs of migrants, including those forced to move by climate factors, said Colleen Thouez, a senior fellow at the New School in New York who has worked on such issues for years.

"We're no longer convincing (world leaders) of the importance of having mayors' voices - the U.N. is inviting them in and recognising their centrality as solution-bearers," she said.

COVID-19 emergency policies may also have swayed thinking on how to deal with sudden migrant influxes, Thouez said, citing as an example greater willingness to extend health and welfare access to people without the necessary documents.

At the fish market in Beira, the orange sunset is visible through a gap where the roof once was. Some of the remaining metal rafters dangle precariously towards the ground, a reminder of the 2019 cyclone's devastation.

Some $200,000 from the MMC fund will now be used to repair the fish market and initially relocate 100 families living in flood-prone areas to less vulnerable fishing neighbourhoods in Beira, with the potential to relocate hundreds more.

Unlike other assistance, MMC gives funding directly to city governments to "implement projects of their own design", said Samer Saliba, head of practice at the organisation, noting that Beira Mayor Albano Carige had submitted the fish market project.

"His administration will receive and use the funds independently," Saliba added.

At his office in the city council buildings up the road from the market, Carige said he hoped life could soon finally return to normal for Beira's fishermen, fishmongers and their families.

He is also keen to share his city's climate adaptation lessons with other local government officials around the world, and make sure Beira is better placed to cope with future climate-related threats.

"In the future I don't want to stress when we hear a disaster is coming. I want to feel that we're strong enough to adapt to climate change," he said.

(Reporting by Kim Harrisberg and Carey L. Biron; Editing by Helen Popper. The Thomson Reuters Foundation is the charitable arm of Thomson Reuters, and covers the lives of people around the world who struggle to live freely or fairly. Visit http://news.trust.org/climate)