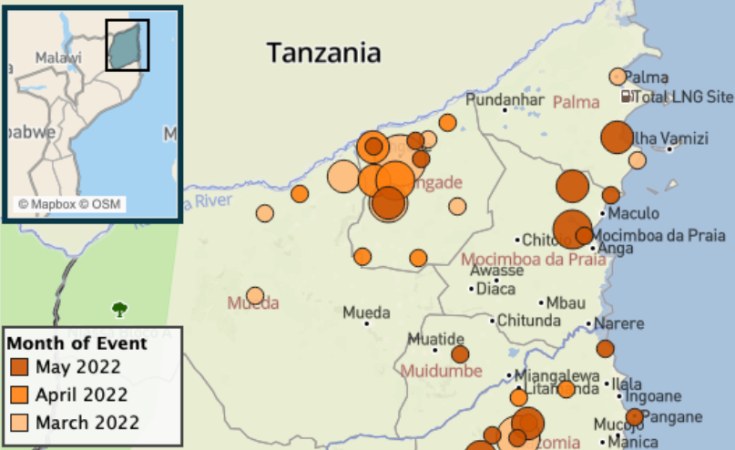 Cabo Ligado
The coloured rings in this excerpt from a map of northern Mozambique show the incidence of "organised political violence events" over the past three months.
Mozambique News Reports And Clippings (Milton Keynes, UK)
By Joseph Hanlon

As predicted, insurgents under pressure from solders from Rwandan and the SADC Mission in Mozambique (SAMIM) are moving to ignored and less protected areas.

Insurgents attacked three villages near Bilibiza, in Quissanga district, on 31 May, in the first attack in nine months. Zitamar (2 June) says information on the attacks is difficult to obtain because "locals fear being caught speaking on the telephone as defence forces suspect them of communication with insurgents."  Six armoured cars were sent to Bilibiza from Macomia, 90 km north, and are being followed by other military vehicles, reports Noticias de Defesa (3 June)

At least 100 insurgents have recently moved to set up a new central base in dense forests of Meluco district, according to Pinnacle News (3 June), citing illegal artisanal miners and loggers who operate in the forests. Zitamar (3 June) says that "There have also been persistent rumours of battle-hardened reinforcements joining the insurgency in Cabo Delgado from Democratic Republic of Congo and other countries in East Africa" and that "Pinnacle's report suggests that the recent wave of insurgent surrenders might represent a clear-out of less effective personnel from the insurgency, rather than a sign of weakness." There have been a series of attacks in Meluco, including attacking power lines (Noticias 2 June)

And the director of a primary school in Mandimba, Niassa, has been detained by police and accused of leading a group which attacked two administrative posts on 22 and 26 May, Mirza Maguanda, Niassa police spokesperson said. (Carta de Moçambique, 2 June)

Attacks also continue in Nangade district, next to Palma and the Rovuma river bordering Tanzania, despite the presence of SAMIM troops with dead and captured people. (Lusa 31 May, 2 June) Other groups have moved to isolated parts of Mueda district, where groups of armed men have been seen recently. (Pinnacle News 3 June)

All of this points to insurgents moving north, south and west, having been pushed out of the key gas provinces of Palma and Mocimboa da Praia by Rwandan soldiers and police. Some have moved north to Nangade and south to Macomia districts, where fighting continues. Others have moved west, to remote parts of Mueda and into Niassa province, southwest to Meluco, and south to Quissanga where there is not a large military presence and it is easy to hide. Finally, some have gone to ground in Palma where there have been attacks.

Quissanga is the southernmost district affected by the war, and it was largely recaptured by the Mozambican army and police a year ago, but with Quissanga town and Bilibiza largely destroyed. It is just 100 km from Pemba on a good road and only 70 km from Metuge, where tens of thousands of displaced people are crowded into camps. In the past year, it could have become a model of reconstruction. Hundreds of young displaced people could have been given jobs and training rebuilding those towns. Services could have been restored. The army could have shown that it could protect those towns. It could have become a beacon for young people, showing  an alternative to the insurgency. But the opportunity was missed. The district was left empty, and now it is the insurgents who are returning. jh

Demonstration in Macomia against soldiers

Petty traders in Macomia town marched on the administration building on 1 June to protest against what they called "kidnapping" and "extortion" by soldiers. The group was made up of people selling telephone time, serving as agents for the MPesa electronic money system, stall holders, and sellers of various goods on the street. They said five traders had been taken by soldiers in May and three are still missing - a motorcycle taxi driver, an MPesa agent, and a street trader.

The march was triggered when an MPesa agent was taken on 31 May. During the march, he was released in the main market, and the march broke up. But three remain missing. Tension has continued between security forces and local people, because the security forces believe - probably correctly - that some local people support the insurgents, and they accuse the traders. (MediaFax 3 June)

Local people and Lusa (30 May) point to indiscipline within the security forces, and the recruitment of petty criminals into the military who continue their activity in uniform, unchecked. Tensions have been growing and local people compare indiscipline of local soldiers and police to the discipline of the Rwandan soldiers who are respected by local people.

Last week, the Mozambican national police command announced it would send inspectors of Macomia to investigate claims of torture of civilians.

Next Story
Tagged:
Copyright © 2022 Mozambique News Reports And Clippings. All rights reserved. Distributed by AllAfrica Global Media (allAfrica.com). To contact the copyright holder directly for corrections — or for permission to republish or make other authorized use of this material, click here.