Mozambique: Equal Rights for Persons With Albinism - "The Blood That Runs in Our Veins Is the Same" 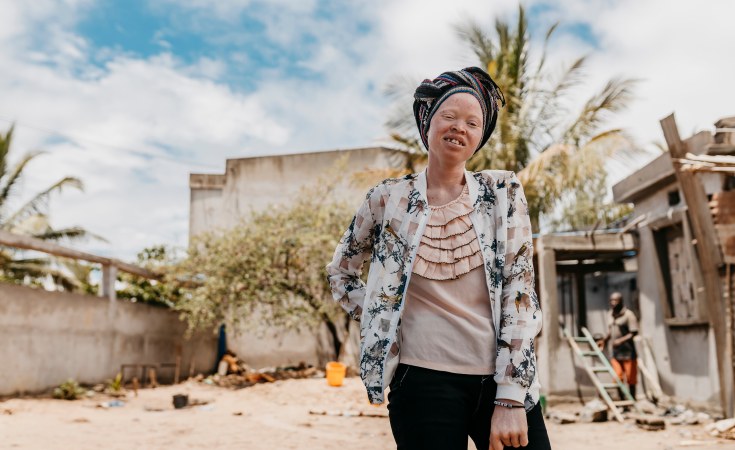 Mbuto Machili / UNFPA Mozambique
Bastina Agostinho, abandoned by her mother as a child due to her albinism, has become an activist for persons with albinism and other disabilities.
UNFPA East and Southern Africa (Johannesburg)

Nampula Province, Mozambique — When she was younger, Bastina Agostinho's mother abandoned her because she has albinism, a rare and genetically inherited condition present from birth.

A further tragedy struck when she lost her father, and she was taken in by her grandparents. Now 18 years old, she has become an empowered young woman - she is thriving at school, and is among friends who support her - and an activist for persons with disabilities, despite the challenges she has faced from early childhood.

Her ability to inspire others led to her selection for profiling in the Wanted: A World for One Billion exhibition at the 2022 Global Disability Summit.

"I have the right to decide, to choose my friendships and what I feel comfortable with," she says.

An estimated 20,000 to 30,000 Mozambicans live with albinism, though the number is likely to be higher. The condition results in a lack of pigmentation (melanin) in the hair, skin, and eyes, causing vulnerability to the sun and bright light. Most people with albinism are visually impaired and prone to developing skin cancer. There is no cure for the absence of melanin.

As a member of UNFPA-supported national networks and organizations for persons with disabilities, Ms. Agostinho is a beneficiary of the United Nations (UN) three-year joint programme, Promotion and Protection of Persons with Albinism, financed by the Government of Norway to the tune of $731,000 (6,000,000 NOK). The programme is being implemented by UNFPA, UNESCO, IOM and OHCHR in partnership with the Government of Mozambique, through the Ministry of Justice, Constitutional and Religious Affairs, Organizations of Persons with Albinism (OPAs), and the TVET institutions (IFPELAC).

The project will combat stigma and discrimination against persons with albinism (PWA) through awareness-raising campaigns and capacity building of partners, including government, civil society, law enforcement officers, media, community leaders and service providers. It will also provide professional training for PWA and offer business start-up toolkits to address their exclusion from quality education and the professional and labour market.

"Being a woman is not easy, but it is not difficult either. To be a woman is to be everything - a friend, a partner, a mother, a teacher. Everyone who is a human being needs another human being," Bastina says.

Hear more about Bastina's optimistic perspective on life by watching this video.

The project will increase access to health, protection and juridical services for people like Bastina, while also strengthening evidence-based decision-making regarding the human rights and participation of persons with albinism in the development process in Mozambique.

About the joint UN project

Funded by the Government of Norway, the project began in 2021 in the provinces of Maputo, Zambézia, Tete, and Nampula. It is being implemented through the Multi-Sectorial Group on Albinism, led by the Ministry of Justice.

The four UN agencies supporting the implementation of the project are United Nations Educational, Scientific and Cultural Organization (UNESCO), International Organization for Migration (IOM), the Office of the United Nations High Commissioner for Human Rights (OHCHR), and the United Nations Population Fund (UNFPA). It will benefit about 300 people, including persons with albinism, who are members of the concerned PWA civil society organizations, community leaders, law enforcement officers, health-care officers and members of reference groups on human trafficking.

Tagged:
Copyright © 2022 UNFPA East and Southern Africa. All rights reserved. Distributed by AllAfrica Global Media (allAfrica.com). To contact the copyright holder directly for corrections — or for permission to republish or make other authorized use of this material, click here.