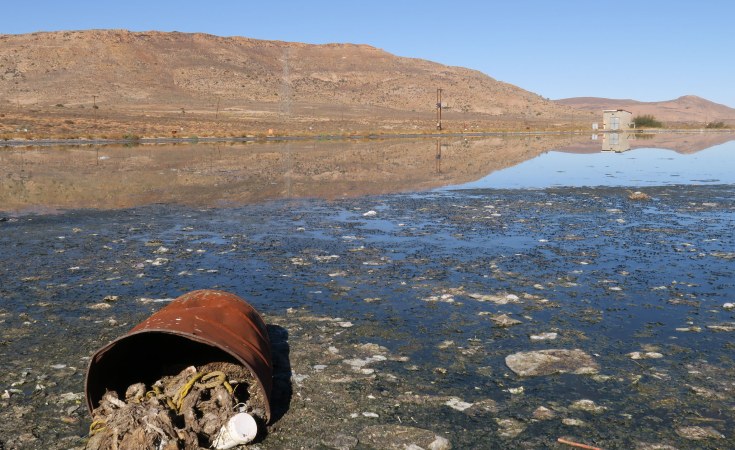 Steve Kretzmann/GroundUp
This is the failing sewage works in Springbok, Northern Cape, one of 334 in the country which obtained a Green Drop score of 30% or less.
Daily Maverick (Johannesburg)
analysis By Tony Carnie

With sewage pollution still above safe swimming levels at several places along the Durban coastline, there is still no certainty on when the city's main beaches will reopen.

More than two months after all Durban's beaches were closed because of the devastating April floods, several sewage treatment works are still kaput - and it could take several months to repair them.

Large sections of sewerage reticulation pipelines are also broken, adding to the torrent of untreated sewage flowing into the ocean from a city with close to four million people. A further concern is the volume of untreated chemical and kitchen effluent flows from numerous industries and small businesses across the city.

According to a provincial government report presented to the KZN Parliament last week, the eThekwini (Durban) Municipality has at least 27 wastewater treatment works, 289 sewer pump stations and more than 9,000km of sewage/wastewater pipelines.

The report says nearly one-third of these treatment works suffered "high" flood damage and an unspecified number were considered to be "totally non-functioning as a result of the floods".

It further suggests that more than R4-billion is needed for "repairs and upgrades" to eThekwini's wastewater treatment infrastructure, while a further R1.7-billion was needed...

Half of South Africa's Sewage Treatment Works Are Failing