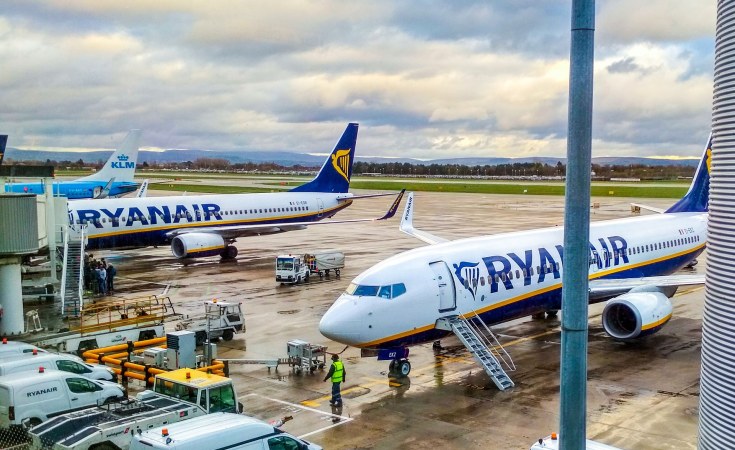 Ryainair boss Michael O'Leary's announcement that his airline would stop testing South African passport holders in Afrikaans before boarding is almost as ridiculous as the test itself was.

"Our team issued a test in Afrikaans of 12 simple questions like what's the name of the mountain outside Pretoria? They have no difficulty completing that, but we didn't think it was appropriate either. So we have ended the Afrikaans test because doesn't make any sense," O'Leary told Reuters.

It seems O'Leary himself is realizing just how nonsensical this bizarre scheme was, which Ryanair previously justified as the "least intrusive" way to catch fake passport holders.

Allegedly a "substantially increased cases of fraudulent South African passports were being used to enter the United Kingdom."

And after all, according to Ryanair, Afrikaans is a widely spoken language in South Africa and is one of the nation's 11 constitutionally-recognized languages.

But using Afrikaans as a measure of 'how South African you are' drew an immediate backlash, because Afrikaans is not simply 'another official language'.

The June 16, 1976 Soweto Uprising, which saw Apartheid police violently suppress and kill protesting Black schoolchildren, became a symbol of the anti-Apartheid struggle. It was ignited when Afrikaans was forced on Black South African schools as medium of instruction.

The notion that once again South Africans would be tested in Afrikaans whether they liked it or not is deeply painful for many. And isn't, as O'Leary would have us believe, simply a case of "doesn't make any sense."

Imagine, a few years from now, Ryanair forcing Ukrainians to take a test in Russian to prove they had real Ukrainian passports. After all, Russian is widely spoken in Ukraine, and aren't Russian and Ukrainian kind of similar anyway?

Of South Africa's 11 official languages, only English and Afrikaans have intrinsically European roots, and today, Afrikaans plays a complex role in South Africa.

After generations from all walks of life were taught to speak Afrikaans, feelings towards the language are complicated. Simply ridding Afrikaans from everyday life will not occur anytime soon. Many speak Afrikaans out of necessity, and the language's reputation has evolved. Still, I know many South Africans who were forced to learn Afrikaans, then actively unlearned the language because they did not want to associate themselves with the brutal memories and trauma the language held.

Aside from the historical and political problems around Afrikaans, Ryanair's testing policy was clearly flawed. Afrikaans is South Africa's third most-spoken mother tongue after Zulu and Xhosa, with only 13% of people speaking it as a mother tongue (that's 87% who don't).

By Ryanair's logic, a South African with a valid passport could therefore have been denied boarding if they failed the test. This is as ridiculous as making Irish people pass a test in Gaelic to prove they are really Irish.

Afrikaans originated in South Africa as a lingua franca between Dutch colonizers, slaves and indigenous communities. Because Afrikaans is descended from Dutch, literally all Dutch-speaking citizens of the Netherlands would have passed this test if they were part-time pub quiz enthusiasts.

Actually, if Ryanair really wanted to weed out who was -- or wasn't -- really South African, they might as well have brandished tests in isiZulu or isiXhosa instead.

Not a flying fluke

But why did Ryanair insist on such a callous policy for almost two weeks, when even British immigration officials didn't require such tests?

Sure, UK authorities can fine airlines per fake passport holder. So perhaps this was a huge publicity stunt aimed at an uninformed public sympathetic to any sort of anti-immigration methods regardless of how effective they are.

It also seems a calculated economic move. Ryanair's top brass witnessed how easy, and of little consequence, it was for European nations simply to sever air links to southern Africa during the COVID-19 pandemic.

Ostensibly this was done to protect public health, regardless of how ineffective those travel bans actually proved to be in combatting the spread of the virus. The move devastated southern African economies.

But what about all those fraudulent passports?

Yet, Ryanair's action has called into question the integrity of all South African travelers. The Afrikaans tests smack of linguistic and racial discrimination.

Worse, the tests did nothing to prove anything about nationality. Instead, Ryanair's move again showed how much discrimination is tolerated in the travel industry.