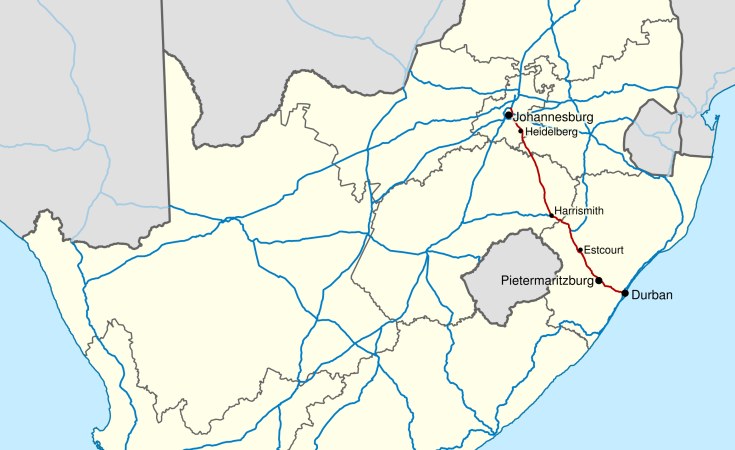 Htonl / Wikimedia Commons
A map showing the N3, the highway between the port city of Durban and Johannesburg in South Africa.
Daily Maverick (Johannesburg)
analysis By Des Erasmus

Traffic on the N3 started flowing again on Thursday evening after a day of blockades by trucks seriously disrupted traffic on the normally busy Van Reenen's Pass. The blockade shut down the critical supply chain route that connects KwaZulu-Natal to the interior of the country.

The Durban Chamber of Commerce and Industry on Thursday night called the truck blockade on the N3 "an act of economic sabotage".

"Such behaviour cannot become a norm for addressing social issues in South Africa when so many other functional platforms exist.

"These acts cannot only be viewed as acts of sabotage towards the businesses directly affected, but this affects all members of society due to the far-reaching economic consequences."

The congestion and road closures along the N3 were increasing, said chamber president Palesa Philli in a statement, and "should no longer be tolerated".

"These factors create uncertainty and delays in freight turnaround times, creating additional costs for businesses and other economic problems."

According to Zinhle Mngomezulu, KZN spokesperson for the Road Traffic Inspectorate, drivers began blocking the N3 before 5am on Thursday. Many abandoned their trucks on both carriageways and removed the keys, a common tactic of protesting truckers.

She said there were about...