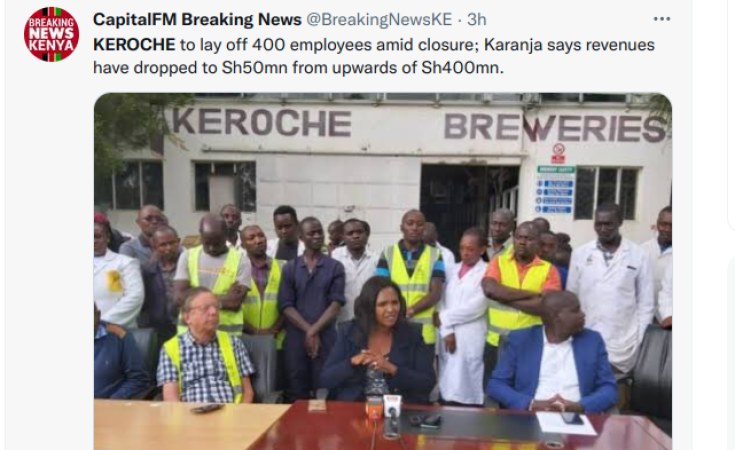 Nairobi — Keroche Breweries has laid off 400 workers after its Naivasha plant was closed down by the Kenya Revenue Authority(KRA).

The company was shut down on May 15, after defaulting on an earlier agreed plan to repay tax arrears of Sh30 million.

Keroche CEO Tabitha, on her Twitter page on Monday morning expressed how the closure affected her, "I was thinking aloud on Sunday afternoon and pondering how I will relay the painful message to our employees on Monday that we will be laying them off as a result of KRA's closure."

"I was also at pains as I looked at all the beer in the tanks that we shall be forced to drain to waste and wondered why and how the relevant ministries remain so indifferent to the dire consequences of the current closure of the company's factory," Karanja said.

Karanja, a Nakuru Senatorial candidate, referred to her company's closure as a national security issue that the Ministry of Interior should be concerned about.

"The staff at Keroche will be joining millions of other jobless Kenyans as economic conditions continue to worsen and push more Kenyans to misery," she added.

Karanja now wants the Labour ministry to be concerned and interrogate the matter in order to safeguard the welfare of the employees.

"I wish to dispel the narrative that has been created by KRA that Keroche Breweries Ltd is a non-compliant taxpayer who perpetually default on their tax obligations," said Karanja.

She noted that Keroche Breweries earned monthly revenues of between Sh400 million-500 million pre-Covid-19. After the prolonged closure, the revenues dropped to below Sh50 million.

Karanja noted that the post-Covid effects and the on/off closures of the company's factory by KRA have left the company a shadow of the pre-Covid establishment.

She attributes her woes to the move to join politics through the Deputy President William Ruto-led UDA party.

The CEO called on the Ministry of Industrialization, Trade and Enterprise to defend local investments and enterprises, and take all lawful measures to support them to develop and grow.

"Does the Ministry understand how long it takes to build an enterprise even half the size of Keroche Breweries? They should not and cannot sit put and watch existing Industries being brought to their knees by the very government agencies that are meant to facilitate growth. This will surely erode investors' confidence in our country," she posed.

She added that the Government needs to cushion Industries facing difficulties, especially local industries which have no parent companies in other jurisdictions to cushion them, like the multinationals.

"This is a humble request that all the relevant authorities be requested to rise to the occasion in order to amicably resolve the current issue and further protect and create a conducive and enabling environment even for other industries that may be suffering in silence," she said.

The CEO called for a meeting with the Commissioner-General of KRA to articulate the firm's predicaments as they seek a moratorium.

The businesswoman also asked for more time to pay the Sh500 million tax negotiated in December 2021 and due six months after.