Zimbabwe: Nurses Say Patients and Their Families Should Join Strike, As Job Action Starts On a High 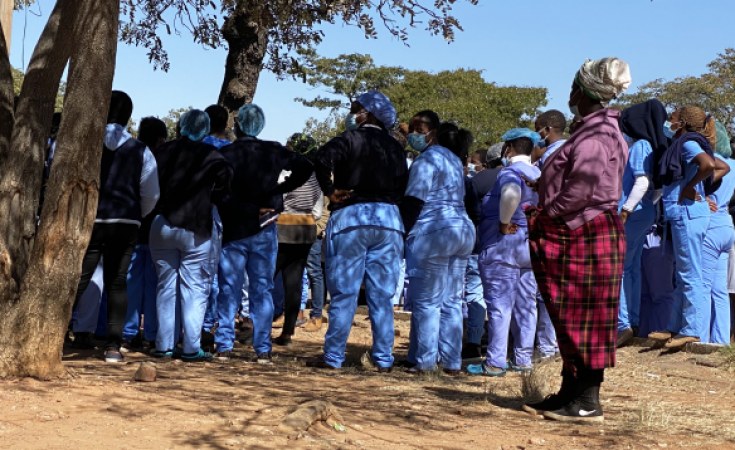 Nurses at Harare Central hospital have called on the public to join their protests against government's failure to address their demands, as the crisis at public hospitals deepens.

The calls come at a time health workers, mainly doctors and nurses, have withdrawn their services over poor remuneration across the country.

It has emerged that the second largest referral centre does not even have simple painkillers like paracetamol amid the trending crisis.

Doctors and nurses at the hospital Monday, joined the nationwide strike citing incapacitation but a nurse who talked to NewZimbabwe.com on condition of anonymity said the situation on the ground was even worse.

"I feel pity for patients and their relatives here," said the nurse after being asked how they felt about abandoning their workstations.

"The problem is that everyone thinks it is only the duty of health workers to protest when they are disgruntled, but even the patients have rights too.

"Everyone thinks we are heartless after being offered a 100% salary increment which however makes no difference. We love our job, our mission is to save lives but how do we deliver when we do not even have paracetamol?

"Even if we were to stay, what would we use to treat the patients? We do not have any medicines here and patients are told to buy their own medication.

"Besides demanding salary increments, we also want a good working environment, where we are provided with everything we want for treating sick people.

"We want a situation whereby patients stop buying medication for themselves because this is a state institution," said the nurse.

At Parirenyatwa, nurses vacated their posts and left patients lying on floors and outside hospital premises as they marched to the Health Services Board (HSB) alongside fellow disgruntled junior doctors.

A source at the hospital said only minimum staff was still available by day end.

The same situation prevailed at Harare hospital where a majority of nurses abandoned patients around midday.

After being addressed by their superiors, they left for home.

The nurse said it was time for the public to petition the hospital authorities.

"If they do not do so, as you have seen, everyone (nurses) has left, meaning there will be no one to attend to them. They should join the protests."

The nurse said they will still not return to work if tools of their trade are made available and their wage demands not met.

Their ZW$18 000 monthly earnings have been eroded by inflation and a rising exchange rate that has left them with barely US$100 equivalents on pay day.

"Our health services board which is our employer and the ministry of health have totally refused to talk to the health workers.

"To us as health workers , there has not been any dialogue," said.

"The 100 percent has not been formally offered.

"You don't need to be told that the salary that you are receiving is not enough. It is now clear that the members want to totally withdraw their labour," said Dongo.

Another attempt at stopping the job action by deputy health ministry John Mangwiro, who invited represented labour unions to a crisis meeting in Harare, had not yielded any positive outcome for government by publication.