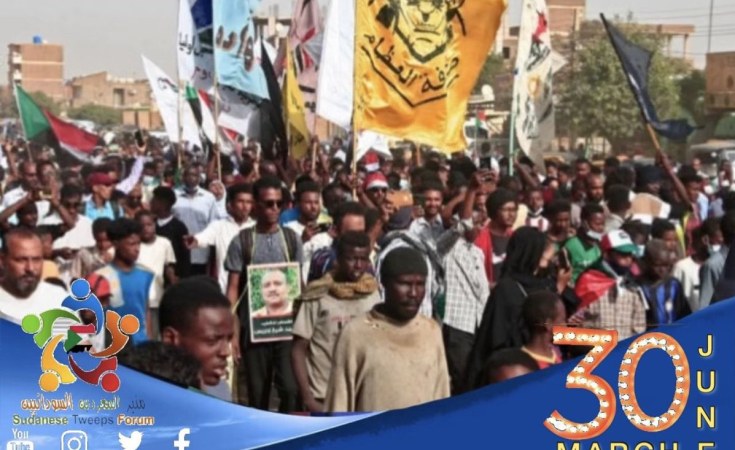 Khartoum — Seven Sudanese legal and human rights groups have called on the Secretary-General of the United Nations for the need to take international protection measures on marches and processions on June 30, noting the violence previously used against peaceful demonstrators.

The seven groups, including the Darfur Bar Association, the Emergency Lawyers, Women Lawyers for Change, informed the UN Secretary-General, in a memorandum submitted to Volker Perthes, UN Special Representative for Sudan, and head of the United Nations Integrated Transition Assistance Mission in Sudan (UNITAMS), of the military and security measures taken by the authorities against unarmed civilians, exercising their right to peaceful expression.

They demanded the UN to take the necessary measures and address the authorities to abide by the provisions of the law, the Constitution, and international agreements ratified by Sudan.

The groups pointed to widespread detentions in neighbourhoods and in the streets, "especially among children from members of resistance committees", the deprivation of the residents of the Sudanese capital to move freely by the closure of roads and bridges connecting Khartoum, Omdurman, and Khartoum Bahri. The memo as well reported that some women in the streets were robbed of their belongings by members of government forces.

Forces for Freedom and Change

The mainstream Forces for Freedom and Change-Central Council (FFC-CC) called on regional and international actors to stand by the Sudanese people, and urge the Sudanese authorities to respect the people's right to peaceful demonstration.

In a statement yesterday, the FFC-CC stressed that "defeat of the putschists is the only door for Sudan for constructive cooperation with the international community".

The opposition group demanded from the government forces "not to wage a battle against their people, but to protect them against aggression". It stressed the need to build "a united civil front from the forces of the revolution in order to overthrow the coup".

"June 30 is not a final event, but rather part of a process that will continue in the following days, leading to the defeat of the putschists, and the achievement of the revolution's goals in full," the FFC-CC said.

Omar El Degeir, head of the Sudanese Congress Party, said that the June 30 Marches of Millions aim "to confirm the demands to end military rule and establish a full civil authority that represents everyone".

In a post on his Facebook page yesterday, he said that "the most important demands of the revolution are to reach a single professional national army, military and civil institutional reform, the restoration of justice, accountability, economy and peace, as well as dismantling the structures of the former regime, constitution-making and elections".

The two main rebel movements that did not sign the Juba Peace Agreement, mainstream Sudan Liberation Movement under the leadership of Abdelwahid El Nour, and the Sudan People's Liberation Movement-North, headed by Abdelaziz El Hilu both confirmed their support for the June 30 Marches of the Millions.

At Least 7 Dead in Mass Protests Against Army Rule