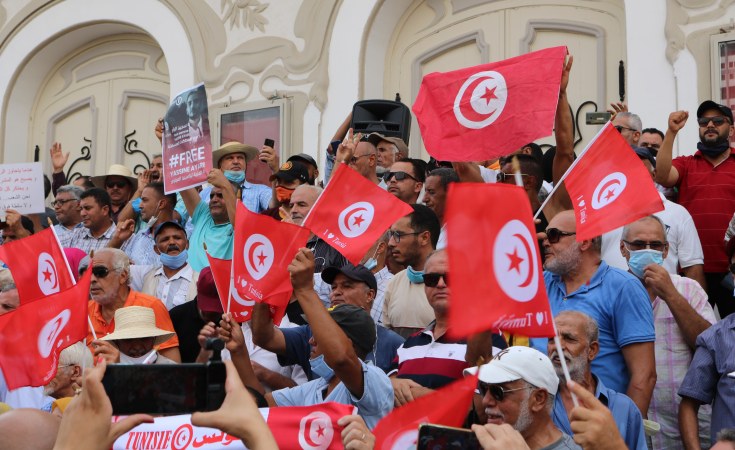 Tunisia's President has published details of a reformed constitution that would vastly expand his powers and limit the role of parliament.

Kais Saied has ruled by decree since last summer, when he sacked his government and brushed aside the democratic 2014 constitution ushered in through the Arab Spring protests.

The draft document, published in the government's official gazette on Thursday, will be put to a referendum on 25 July, exactly a year after he suspended parliament.

He said the move was necessary to "save the country" from political and economic crisis.

The new constitution - drawn up by a committee handpicked by Saied - would give the president greater executive power than the prime minister and establish a two-chamber parliamentary system for the first time.

The President would have ultimate control of the judiciary and army as well as the government.

He could serve two terms of five years each, but extend them if he felt the state was in imminent danger.

🇹🇳 #Tunisia's President #Saied published a planned new constitution on Thursday that he will put to a referendum next month.He will be expanding his own powers and limiting the role of parliament.@FadilAliriza has more ⤵️ pic.twitter.com/i3rZSDXUbe-- FRANCE 24 English (@France24_en) July 1, 2022

Saied's critics accuse him of dragging the country back to the autocratic form of government that was overthrown during the 2014 Arab Spring revolt.

Opposition political parties are urging their supporters to boycott the vote.

Several organisations, including the powerful central trade union, the UGTT, have deplored the absence of a public dialogue in preparing the new constitution, dubbing it "the Constitution of Kais Saied."

Saied has, however, maintained most parts of the 2014 constitution that enumerated rights and liberties, including freedom of speech, the right to organise in unions and the right to peaceful gatherings.

Many Tunisians, meanwhile, are more focused on a growing economic crisis and threats to public finances that have caused salary delays and the risk of shortages of key subsidised goods.

There is no minimum level of participation for the constitution to be validated through referendum.

An online 'consultation' Saied held from January-March in preparation for drafting the constitution drew little interest and participation was low.