Cameroonian Pushes for Restitution of Deity 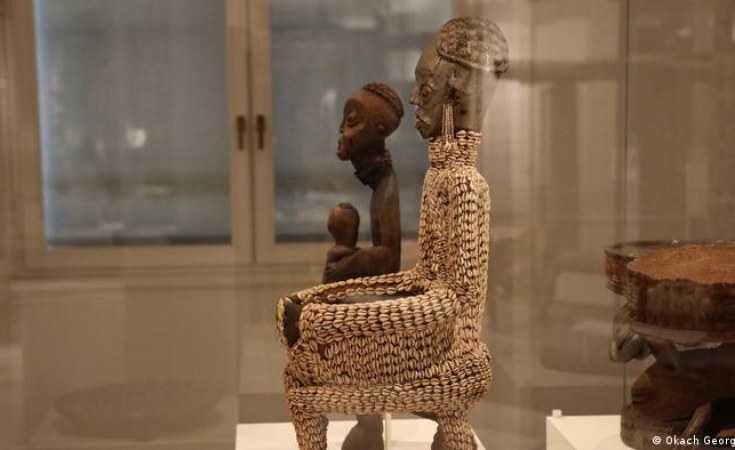 Njobati Sylvie, a resolute restitution activist, could not hide her joy and reprieve after Germany's Prussian Cultural Heritage Foundation made the announcement that Ngonnso has been given the green light to return home.

Ngonnso is a mother deity of northwestern Cameroon's Nso people. She was taken by Kurt von Pavel, a colonial officer in Cameroon, who subsequently donated her to Berlin's Ethnological Museum in 1903.

"I feel super elated, it has been a journey that has culminated to a win for the Nso community, Cameroon and by and large the entire African continent," Njobati told DW in an exclusive interview.

But her restitution activism actually started before that -- when she decided to reconnect with her Nso heritage and trace her roots.

She grew up in the Cameroon's Anglophone region with her mother and the heir apparent of the Nso community -- her grandfather.

He couldn't take up the leadership position because he became a Presbyterian pastor.

"I grew up with my grandfather totally disconnected with my culture and tradition. I was embedded into Christianity," she told DW.

When she finally joined University in Yaounde -- the French speaking side of Cameroon -- her Anglophone background made her feel unwelcome. This led to an identity crisis and emptiness.

"I remember one day at the market someone called me an Anglofool. This was just the beginning of a backlash I received as a young person from the English speaking expression," she said.

It is at the this point in her life that Njobati realized that she has been "fully covered by cultures that are not hers."

"I also remember asking myself, who am I if I'm stripped off the colonial heritage, who I'm I if stripped off the English or French system of education, law or even religion," she quipped in despair.

But all these multiple identity crisis embolden her quest to return to her roots and try to reconnect with her original tradition and heritage.

"Some of my young peers felt like I'm putting up a show. They thought like I'm not qualified to have a conversation with myself of going back to find my roots. They believe only African diasporas do such things."

This journey of reidentification is what resulted to her realization that Ngonnso -- "the founder of Nso community" was not in her rightful place.

When she was told the history of the events that unfolded before the statue was taken from the Nso people, she felt disturbed and developed a steadfast commitment to lead the quest of its restitution.

"Ngonnso was stolen from the palace, in violent expedition, the palace where it used to sit, was razed down by the German colonialists. There is no way it can continue being away from its rightful place," she said.

"I remember promising my grandfather that I will ensure that we BringBackNgonnso. He also wanted to see Ngonnso back. Unfortunately my old man died before this could happen," she said introspectively.

Njobati embarked on a strategic approach that involved rallying masses on social media to pay attention to the importance of restitution.

"Some of my peers thought that this was a waste of time and resources. But I asked myself how many people with the desire to see Ngonnso back to Cameroon will die before her restitution happens," she posed.

Thanks to the campaign, the statue which was placed -- for decades -- under the basement of Humboldt Ethnological Museum, was finally brought up for public display.

Njobati's unending resolve brings to the forefront the conversation about young people's involvement in confronting colonial past.

"Restitution of Africa's stolen artefacts is a central part of confronting colonial past. The young people should be key stakeholders in this conversation," she charged.

This is in consideration of the multiple challenges that affect them like unemployment to mention the least.

However, according to Njobati, a true African rebirth will only be realized "when the youth get reconnected with their true heritage" and confronting colonial past is part of it.

According to Njobati, the successful quest she led that began the restitution process of Ngonnso should be an encouragement to other young Africans.

"For us it's Ngonnso, a sacred statue, but there are thousands of stolen African artifacts still being displayed in multiple European museums. We, the youth, should lead the quest of bringing them back," she told DW.

"I'm always asked why is it important to have the objects back, for me it's about the principle of justice. Africa has suffered colonial crimes for a long time. We must deal with these issue if we want to remain true to confronting colonial past," she further added.

According to the 31-year-old restitution activist, "continued display of the artifacts at European museums is disrespectful and a simple a show of power."

She further adds that "it demonstrates that the colonialists came, conquered African nations, took they their integral heritage some with spiritual significance, and are holding them captive at museums" to amplify the message.

The Prussian Cultural Heritage foundation is now set to hold further talks with Nso people's representatives on how Ngonnso will arrive in back in Cameroon.

Njobati is part of this talks. She now further believes this successful quest has opened possibilities of calling for the other thousands of objects being held at varied European museums.

"The quest that began with the need of bring back Ngonnso will now advance to a quest to take back all the heritage that belongs to the African continent," she said.

"My intention is to rally young people, historians, researchers in a bid to have what is rightful ours brought back. This is our heritage. Let the artifacts be brought back to us."

Speaking to DW Prussian Cultural Heritage foundation president Hermann Parzinger said that objects that were not necessarily looted "should also be repatriated."

"We are open to restitution and after the due diligence is followed we are obliged to return .... In every restitution process we must get a claim and we access them diligently and independently," Paringer added.