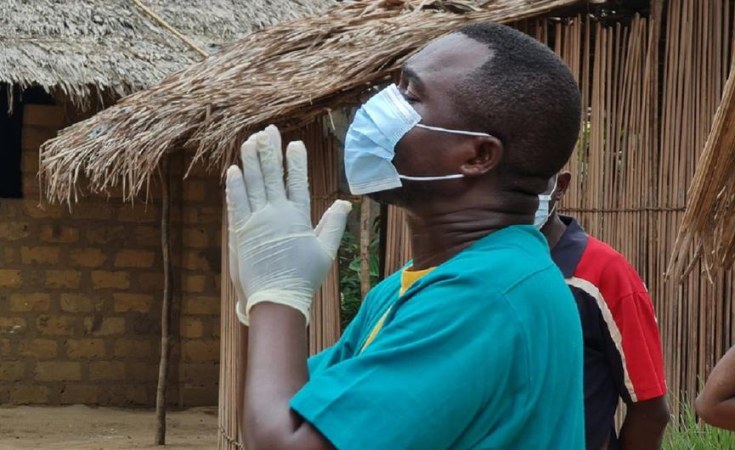 WHO
A health worker in Motema Pembe area prepares for a household decontamination in Mbandaka, Democratic Republic of the Congo (file photo)
UN News Service

The Democratic Republic of Congo (DRC) has declared the end of its 14th Ebola outbreak after less than three months, the UN World Health Organization (WHO) said on Monday.

There were four confirmed cases of Ebola and one probable case, all of whom died, the WHO said in a statement. The outbreak was the third in Congo's north-west Equateur province.

In the previous outbreak in Equateur Province that lasted from June to November 2020, there were 130 confirmed cases and 55 deaths.

"Thanks to the robust response by the national authorities, this outbreak has been brought to an end swiftly with limited transmission of the virus," said Matshidiso Moeti, WHO Regional Director for Africa.

GOOD NEWS! 🥳Today #DRC🇨🇩 declared the end of the #Ebola outbreak that erupted less than 3 months ago in Mbandaka!Congratulations to national authorities and the people of DRC! 👉🏿 https://t.co/w3hUJyqCt8 pic.twitter.com/ed3xlAS65I-- WHO African Region (@WHOAFRO) July 4, 2022

According to WHO, the just ended outbreak saw a total of 2,104 people vaccinated, including 302 contacts and 1307 frontline workers.

To facilitate the vaccination rollout, an ultra-cold chain freezer was installed in Mbandaka which allowed for vaccine doses to be stored locally and safely and be delivered effectively.

'We can stay a step ahead'

The Democratic Republic of the Congo has now recorded 14 Ebola outbreaks since 1976, six of which have occurred since 2018.

"Africa is seeing an increase in Ebola and other infectious diseases that jump from animals to humans impacting large urban areas," said Dr. Moeti.

Noting that "crucial lessons" had been learned" from past outbreaks and they have been applied to deploy an ever more effective Ebola response, Dr. Moeti stressed that: "We need to be ever more vigilant to ensure we catch cases quickly. This outbreak response shows that by bolstering preparedness, disease surveillance and swift detection, we can stay a step ahead."

The UN health agency supported the DRC in implementing a strong national strategy developed early to guide response coordination; decentralizing operations to the lowest level to work closely with communities; basing the response on evidence; and regularly analyzing the epidemiological risk to rapidly adjust the response.

Although the outbreak in Mbandaka has been declared over, health authorities are maintaining surveillance and are ready to respond quickly to any flare-ups.

It is not unusual for sporadic cases to occur following an outbreak, WHO cautioned.