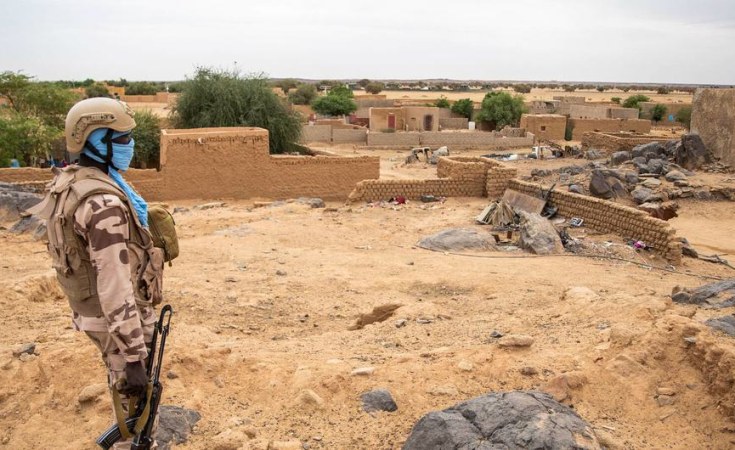 Mali's decision on Thursday to suspend troop rotations by the United Nations' peacekeeping mission (MINUSMA) has raised questions about how it wants to detect the terms of engagement -- something some analysts fear could backfire.

In a fresh blow to the mission, Egypt told the UN on Friday that it will pull its troops from Mali by mid-August, citing deadly attacks against its peacekeepers.

MINUSMA -- which was established in April 2013 to help the West African nation cope with a bloody jihadist campaign -- has been rotating troops who serve on that mission for years.

Mali's military government decision to suspend MUNUSMA follows the arrest of 49 Ivorian troops who arrived at Bamako airport aboard a special flight earlier this week.

Ivory Coast had said the soldiers were part of the fifth MINUSMA rotation, but Malian officials described them as "mercenaries" who sought to topple the country's military-led government.

Deputy UN spokesman Farhan Haq told journalists in New York on Thursday that Mali's move would have dire consequences for troops currently serving on the mission since some of the staff should have been relieved several months ago.

"Rotation of contingents is crucially important for the mission's operational effectiveness and the safety and security of personnel," Haq said.

The suspension of the rotations will affect the 12,261 soldiers and the 1,718 police officers of the contingents of the UN mission serving in the West African nation.

"I think that there are no direct consequences on the populations with regard to the suspension of the rotations of the Minusma. The consequences are much more at the level of reorganization," Elhadji told DW.

However he is concerned about the toll it could have on some of those serving with the UN mission.

"You know, there are soldiers who are there to do four months, others six months or maybe two months," Elhadji said.

"Today with this suspension, some may do more than that before others come. Once again, the consequences will be felt at the level of the reorganization of the various contingents of the UN mission in Mali."

Security expert and executive director of the West Africa Center for Counter-Extremism (WACCE), Mukhtar Mumuni Muktar, told DW that the approach by Mali's military leaders to suspend the rotation program was "dangerous."

"If the goal is to cut ties with the UN mission, cut ties with France and external partners connected with France, it is a dangerous move," Muktar said as he expressed fears Mali may be on the path of ditching the UN peacekeeping mission.

German expert Ulf Laessing, who heads the Sahel regional program of the Konrad Adenauer foundation, told DW the decision by Mali's coup leaders will not be without consequences for the MINUSMA troops.

"I understand that the Malians want to establish new rules for rotations as they did for the interventions of Minusma flights which must be approved in advance by Bamako," Laessing said.

"The case of Cote d'Ivoire [Ivory Coast] is sensitive because Abidjan is considered a close ally of the former colonial power, France."

The decision to suspend the UN mission also includes rotations that have already been scheduled, the Malian Foreign Ministry said in a statement.

The suspension will last until a meeting is held to "facilitate the coordination and regulation" of the rotation of these contingents, according to the statement read.

Laessing said he hoped that "all parties will agree on a solution otherwise MINUSMA will find it difficult to operate effectively and some countries may be reluctant or hesitant when it comes to continuing to send soldiers to contribute to the mission of the UN in Mali."

For Muktar, the strategy of the Malian military regime could expose the ordinary citizens to more danger should security be compromised in anyway if the rotation program impacts negatively on the mission's operations.

"They [coup leaders] are moving further away from all kinds of attempts of getting them to return the country to civilian rule," Muktar told DW.

Mali is currently battling an Islamist insurgency that sprung after a 2012 uprising during which Tuareg rebels took control of large sections of the north of the country, including Gao, Kidal and Timbuktu.

The insurgency has since spread to neighbouring countries, killing thousands and displacing millions across West Africa's Sahel region.

A MINUSMA spokesman initially confirmed the claim by the Ivorian government that the soldiers were part of the rotation contingent.

African analyst Jonathan Offei-Ansah told DW on the telephone from London that Mali's military leaders had the right to be suspicious about the presence of the Ivorian troops and cannot be faulted for trying to have a firm grips of the country's security setup.

"It is just a matter of being extra cautious," Offei-Ansah said.

For him Mali can justifiy being extra cautious about who comes into its territory as it fights back extremists.

"The security situation in that country is very dire, so I think Mali is right to protect those pre-emptive measures," Offei-Ansah said.

The United Nations has now called for a settlement of the current impasse and Offei-Ansah backs that posturing and expressed optimism that a resolution would be found very soon.

"At the end of the day this matter would be resolved amicably," he said, but pointed out that it would take some time to build trust on both sides.

Mali's ruling junta -- which seized power in a coup in August 2020 -- has been subject to EU sanctions and condemnation over election delays.

It has also been criticized for its security cooperation with Russian mercenaries after France withdrew its troops from the country.

The military regime appears to have taken its fate into its own hands to handle its security crisis and Offei-Ansah said it shouldn't be condemned for doing that.

Muktar believes that Mali would struggle to win the fight against the jihadistsit if attempted to completely cut ties with its traditional partners like the UN peacekeeping mission.

"It is a dangerous situation because without these partners the situation in Mali could have been worst," he said.

According to the security expert, "cutting ties with that at this moment is a dangerous situation that can further undermine security of Mali and the Sahel region."

Mali's military government had tried to prolong the process of transitioning to democracy, but pledged to hold elections by March 2024 following the imposition of economic sanctions.

The ruling military junta has been at odds with regional and international neighbours about its transitional programs.

Muktar said the government is still not sufficiently set-up just yet to deliver a stable and secure nation, and should be cautious how it deals with its neighbours and other partners.

"There is a huge military budget that is supported by its partners, the fact that you cut ties with them puts you in a difficult situation of having to fund your own security programs," Muktar said.

"Having to juggling that you meeting development needs and aspirations of the people of Mali, you are talking about a complex situation."

According to Offei-Ansah, regardless of the approach adopted by the Malian government, it still needs to maintain cordial relations with its neighbours, since "no country is an island on its own. You need to have good relations with your neighbours because the jihadists' activities is not restricted to Mali it is spreading across the whole Sahel."

On the streets of Bamako, Malian and Ivorian residents have called for both sides to lower tensions.

"I am not trying to understand who is right. We just need to find a solution," said one resident.

Another Bamako resident asked the two governments to seek common ground before the [incident] leads to another situation.

According to another resident in the Malian capital, "we are Africans and we must understand each other. We are all in difficult situations right now, whether it is Mali, Ivory Coast, Burkina Faso, or Niger."

One passerby told DW that given the relations that exist between the two countries, Mali and Ivory Coast must first focus on diplomacy.

Mali's military leaders have not stated when they intend holding a new meeting to discuss the MINUSMA rotations and it is yet to be seen what they have under their sleeves.