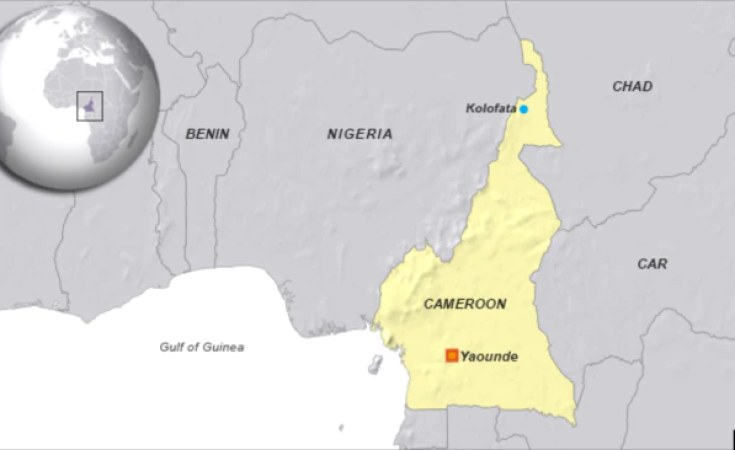 Yaounde — Cameroonian authorities have been displaying the corpse of a separatist leader in towns and villages to deter the rebels and warn youth against joining their cause. Cameroon's military says last week it killed Lekeaka Oliver, who was wanted for working with rebel groups in neighboring Nigeria to kill civilians, commit beheadings, and burn hundreds of public buildings.

Cameroon's military says hundreds of people have watched the past few days as they paraded the corpse of separatist leader Lekeaka Oliver.

The military says its troops last week killed Oliver, a self-proclaimed field marshal who led the Red Dragon rebel group, in Menji, a town near the border with Nigeria, along with his bodyguard.

It accused Oliver of beheading at least 10 people, including three traditional rulers, and attacking scores of schools since 2017.

Chamberlin Ntouou Ndong is the highest-ranking government official in Meme, an administrative unit in Kumba, a town also along the border, where he spoke Sunday to a crowd.

Ndong said Cameroon's government asked the military to display the corpse as a gruesome warning to Anglophone separatists fighting to carve out an independent state from Cameroon and its French-speaking majority.

"It is a testimony that all those who are not willing to surrender are going to face our forces of law and order. The head of state gave a word out to all who remain in the bushes to lay down their arms and join the remaining population in the development of this country," he said.

Capo Daniel is leader of the Ambazonia Defense Forces, a separatist group that fights alongside the Red Dragons.

Daniel says the parading of their leader's corpse will not stop the rebels from fighting.

"Field marshal has been replaced by a younger and more vibrant leader," he said. "Our armed resistance against Cameroon rule will only intensify. Our forces have received instructions to carry out reprisal actions in response to the killing of [the] field marshal. Such display of dead body by the Cameroon government only adds to its list of terror tactics being used to subjugate our people. Our fight of self-determination will only intensify."

Ephraim Foreke is a teacher at a government school in Fontem in the Lebialem administrative unit where many of Oliver's rebel camps were located.

Foreke says Oliver's death is a relief for civilians who lived in fear of the Red Dragons.

Speaking to VOA Monday, Foreke said locals have started cleaning schools with the hope that children and teachers who fled the attacks will return.

"We are in front of the administrative block. There are some people below who are clearing down to the Francophone section. All the doors were destroyed. Chairs that were there were all eaten by rats. Every place is like a graveyard. They ransacked the whole place," he said.

Cameroon's government vowed the military will protect civilians and their property.

The U.N. says Cameroon's five-year separatist conflict has killed more than 3,300 people and displaced at least 750,000 internally and to neighboring Nigeria.

Why the Spoils of War May Outweigh Incentives for Peace