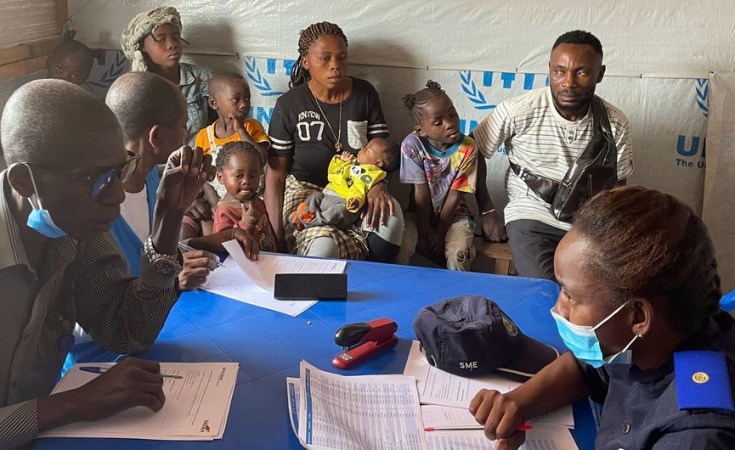 Lina Ferreira / UNHCR
A family of refugees in Angola meets with the authorities and UNHCR officials ahead of returning voluntarily to the Democratic Republic of the Congo.
UN News Service

After a two-year hiatus, the voluntary repatriation of refugees from Angola to their homeland in the Democratic Republic of the Congo (DRC) has begun again, after the programme was put on hold in 2020 when the COVID-19 pandemic led to long-term border closures.

"The first convoy of 88 Congolese refugees departed from the Lôvua settlement in northern Angola this morning towards the border with the DRC. The convoy is expected to arrive in the DRC tomorrow," announced Boris Cheshirkov, Spokesperson for the UN Refugee Agency (UNHCR), at the regular media briefing on Tuesday morning in Geneva.

Today we restarted the voluntary repatriation of Congolese refugees from Angola after departures were halted in 2020 by the COVID-19 pandemic.The first convoy is expected to arrive in the Democratic Republic of the Congo tomorrow. https://t.co/31tGuBMd0a-- UNHCR, the UN Refugee Agency (@Refugees) July 19, 2022

The Lôvua camp in Angola hosts some 7,000 refugees. Many have not seen their family since fleeing political and ethnic violence in the DRC's restive Kasai region in 2017. More than 35,000 people crossed the border to find safety in Angola at the time.

Despite the endemic insecurity and intensification of the armed conflict in eastern DRC, which has caused 5.9 million people to become internally displaced, Mr. Cheshirkov was reassuring regarding the situation in other parts of the country: "Although conflict continues in eastern DRC, improvements in security in the west have re-opened the possibility for Congolese to return to their country in dignity and safety".

Upon arrival in the DRC, refugees receive cash assistance to help cover basic needs such as personal hygiene, household items and initial assistance for rent.

Additional support is also provided to help integrate the resettled populations, such as supplying needed documentation to help children go back to school.

At the same time, "UNHCR will always continue to advocate for the full support in essential services to be provided by the Government, by the authorities, to those going back, especially when it comes to insecurity, so they are able to rebuild their lives", insisted the UNHCR spokesperson.

Already, over 600 Congolese refugees have expressed a desire to return home. More are likely to show interest with the resumption of the programme.

UNHCR assists some 57,000 refugees and asylum seekers in Angola, mostly in urban areas. "This year, the operation has received $10.3 million of the $29.8 million it needs, leaving a significant gap in addressing the basic needs of the refugees and asylum seekers. And UNHCR in DRC has received just 19 per cent of the $225 million required to respond to the growing needs of displaced people in the DRC."

Globally, last year, nearly 430,000 people were able to return home in safety and dignity, a 71 per cent increase on the previous year. Nearly two thirds of refugee returns were to South Sudan. That number represents just two per cent of the world's refugees.