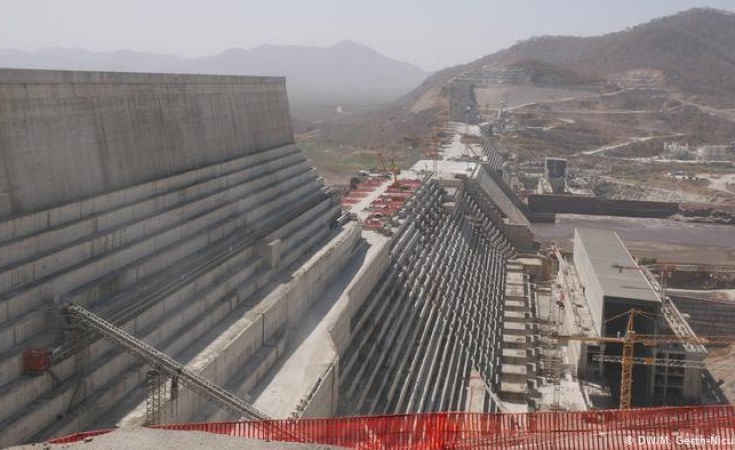 Egypt's President Abdel-Fattah El-Sisi and Somalia's President Hassan Sheikh Mohamud discussed in a meeting in Cairo on Monday a host of bilateral and regional issues, at the top of which are the latest developments regarding the Grand Ethiopian Renaissance Dam (GERD) and ways to enforce security and stability in the region, especially in the Red Sea.

In a press conference following the talks, El-Sisi said, "We discussed during the talks the developments in the GERD issue and we shared views on the danger of the unilateral policies when it comes to implementing projects on international rivers as well as the imperative of adhering to the principle of cooperation and prior consultation."

El-Sisi's statements reflected Egypt's rejection to Ethiopia's unilateral policies when it comes to the filling of the GERD's reservoir.

In the absence of a legally binding deal, Ethiopia unilaterally completed the first and second filling of the dam, and started earlier this year operating the GERD's first turbine to generate power.

Ethiopia also seeks to start the third filling in August and September, according to a recent announcement by the GERD's project manager.

For his part, President Mohamud said that he and El-Sisi agreed on the necessity of having a legally binding agreement for the filling and operations policies of the dam.

El-Sisi said that he and his Somali counterpart discussed ways of boosting bilateral relations, especially economic cooperation, and they reviewed the progress in cooperation projects.

The Egyptian president also announced that the Central Bank of Somalia (CBS) has approved Egypt's Banque Misr opening a branch in Somalia.

Earlier in July, the CBS agreed to grant Banque Misr a license to operate within Somalia, making it the first foreign bank to operate in the Horn of Africa Country.

El-Sisi added that he and Mohamud agreed to boost economic cooperation.

President Abdel-Fattah El-Sisi received his Somali counter President at the Presidential Palace in Heliopolis after his arrival to Cairo.

This is Mohamud's first visit to Cairo after the start of his new term as the president of Somalia in May 2022.

Earlier this year, Cairo hosted retreat on the Post-2021 Arrangements in Somalia with participation from the Federal Government of Somalia, the African Union, the United Nations, and several international partners.

Egypt's exports to Somalia reached to nearly $64 million during 2021, according to the United Nations' COMTRADE database on international trade. The Egyptian exports include milling and pharmaceutical products.

Tagged:
Copyright © 2022 Shabelle Media Network. All rights reserved. Distributed by AllAfrica Global Media (allAfrica.com). To contact the copyright holder directly for corrections — or for permission to republish or make other authorized use of this material, click here.