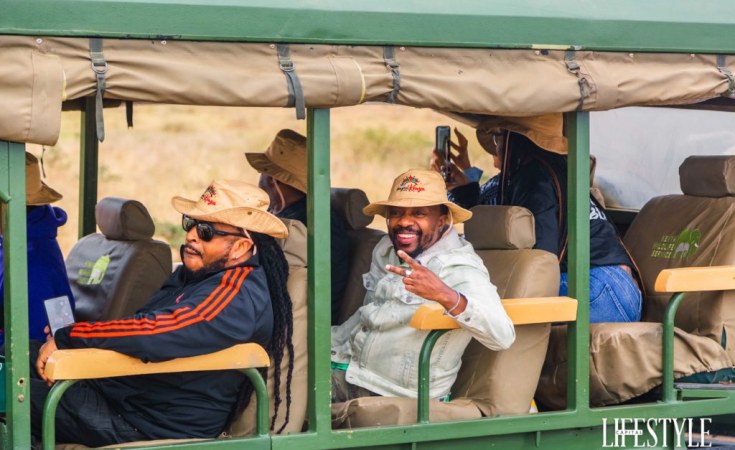 Capital FM
Anthony Hamilton smiles on game drive where he saw a lion for the first time after visiting Africa in 10 years.
Capital FM (Nairobi)

It's not every day you get to meet a "national treasure" who is not only a Grammy award-winner but also, a multiplatinum singer-songwriter, producer with over 25 years in the game, and once described as, "one of the last of the soul singers that had an impact on modern culture." That man is none other than the amazing, talented R&B/soul/neo-soul hitmaker, Anthony Hamilton.

With his signature Southern rasp and charming voice coupled with so much grace its absolutely infectious, Anthony can literally take you to church in one minute with his spiritual undertone that pervades his voice and his lyrics, and the next minute, he takes you to the club, and you find yourself grooving to his tunes, getting you shaking your waist, and boy oh boy, that transition would have you still singing, head bobbing and feeling it deep down in your bones.

Well, the good news is, Anthony Hamilton jetted into the country (Kenya) on Tuesday morning. The singer, who will headline the second edition of Stanbic Yetu Festival at the Carnivore Grounds on 30th July 2022, has been on a meet and greet tour since his arrival, visiting various top spots in the city, enjoying the Nairobi vibe and scene.

On Thursday morning, Kenya Tourism Board (Magical Kenya) led by their CEO, Dr. Betty Radier hosted a 'Karibu Kenya' scrumptious breakfast at the Nairobi National Park for the visiting Grammy award winner. The 6 am morning game drive and tour of the world-famous Nairobi National Park, the only national park in the world located within a capital city, had preceded the English breakfast in the park.

Anthony was excited to have gotten a chance to go on this game drive, saying elatedly, "in the 10 years of my coming to Africa, I have never seen a lion. This morning, I saw plenty of lions, and they were so close by. It was exciting. I have been having a really good time in Nairobi, Kenya."

The Stanbic Yetu Festival slated for Saturday 30th, is organized by Stanbic Bank in partnership with Radio Africa Group and seeks to nurture and promote the development of the performing and visual arts in Kenya. Local acts Otile Brown, June Gachui and The Motown will be on stage too alongside Anthony, who is also known for the song "Freedom" from the soundtrack album of Django Unchained.

He is promising his fans an absolute great time on Saturday, full of beautiful vibes. Come ready to be serenaded with the best from the best, Mr. narrator of Love. Hamilton who says he wants to make sure his songs continue to have a message about life and love, is a huge fan of Bill Withers and Al Green and draws a lot of inspiration from them.

1. Coming from where I'm From

FYI- He says he is single and ready to mingle while in Nairobi.