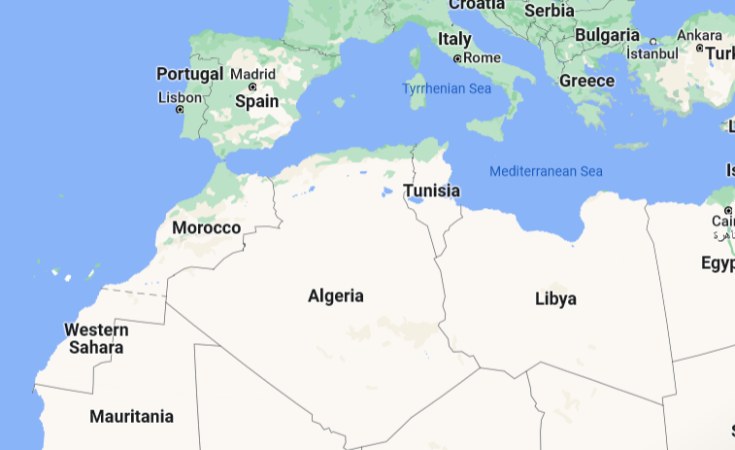 Google Maps
A map showing Spain and the countries of North Africa.
The Conversation Africa (Johannesburg)
analysis By Jacob Mundy

The western Mediterranean region has recently witnessed an intensifying set of diplomatic and economic stand-offs between neighbours Morocco, Algeria, and Spain.

In 2021, Algiers completely severed its already fractured relations with Rabat, and then halted gas exports via the Maghreb-Europe pipeline that flows through Morocco.

More recently, Algeria has launched a number of diplomatic protests against Spain and frozen some of its trade relations. It has also suggested that it no longer views Madrid as a reliable political and economic partner.

At the centre of these tensions is the disputed territory of Western Sahara, a 266,000km² country slightly larger than the whole of the United Kingdom. It is located across from Spain's Canary Islands along Africa's Atlantic coast, primarily between Mauritania and Morocco.

For a long time the Western Sahara dispute was considered a frozen conflict. But it roared back to life in late 2020 when the Algerian-backed Sahrawi nationalist movement, the Frente Polisario (Polisario Front), resumed its armed struggle. The front, which is demanding independent statehood, had been adhering to a United Nations ceasefire since 1991.

Morocco has illegally occupied Western Sahara with tacit European and American blessing since 1975. It controls roughly three fourths of the territory, including its major cities and economic resources. The most important of these are fisheries and phosphate rock.

Morocco has also encouraged mass migration of its own citizens, who now likely equal the number of native Sahrawis in the territory.

Rabat has asserted historical title to Western Sahara since the 1950s. But the territory's right to independence has been enshrined under UN decolonisation law.

A landmark 1975 opinion of the International Court of Justice found the justices unconvinced that the territory belonged to anyone but the native Sahrawi people.

Spain first took control of the land in 1885.

Subsequent UN opinions and rulings of the European Union Court of Justice have upheld Western Sahara's right to independence. Western Sahara remains on the UN list of non-self-governing territories. But it's the only one without a clearly designated administering power.

Western Sahara matters because of the legal principles at stake. These include Morocco's expansion of territory by force. Another is the right of non-self-governing territories like Western Sahara to choose their sovereign status.

Experts have warned for a long time that the unwillingness of the North Atlantic powers to put pressure on Morocco to resolve the conflict will inevitably lead to an even more complicated and entangled set of crises.

This has now come to pass. The failure to resolve the issue is having a negative effect on security and trade relations across the western Mediterranean.

In October 1975, knowing that Spain intended to grant Western Sahara its independence, Morocco announced its intent to take the territory by force. To this end it launched a secret military invasion.

In the chaos of the ensuing transition from Spanish to joint Moroccan-Mauritanian rule, nearly 40% of the Sahrawi population fled to neighbouring Algeria. Today, over 170,000 continue to live in these refugee camps.

The Cold War strongly influenced the 1975-1991 war between Morocco and Polisario. Rabat received substantial backing from the US, France and Saudi Arabia. For its part, the Western Saharan nationalist movement received extensive support from Algeria and other influential members of the Non-Aligned Movement.

This aid allowed Polisario to quickly eject Mauritania from the territory. Nevertheless Moroccan forces successfully ensconced themselves behind a heavily mined 2,700km barrier that bisects the territory to this day.

By the time the UN was able to arrange a cease-fire in the early 1990s, Western Sahara had been recognised as its own state by dozens of countries and the African Union.

The UN Mission for the Referendum in Western Sahara (Minurso, its French acronym) was also created in 1991. It sought to poll the native Sahrawi population on the simple question of whether to join with Morocco or form an independent state.

Despite the elegance of this solution, Morocco and Polisario maintained wildly different understandings of how the UN should go about identifying the Sahrawi electorate for the vote.

These criteria were eventually solidified in a series of agreements negotiated by former US Secretary of State James Baker in the Houston Accords of 1997.

Then, in East Timor, a similar UN referendum effort saw Indonesian security forces go on a violent rampage when the Timorese voted for independence.

Morocco's allies on the Security Council, primarily France and the US, realised that the referendum in Western Sahara was heading towards a similar outcome. The fear was that people would vote for independence but the occupying power would refuse to recognise it.

Since 2000 the Security Council has pressed Morocco and Polisario to develop a more comprehensive political agreement between themselves. The Security Council wanted an agreement that would satisfy Western Sahara's legal right to self-determination. This has proved to be a fool's errand.

Under Mohammed VI, Morocco's policy has shifted to vehemently opposing any process or proposal that could lead to an independent Western Sahara. Morocco has instead put forward a proposal to offer Western Sahara limited self-governance under ultimate Moroccan control.

New tensions were added to the mix in 2022 when Spanish Prime Minister Pedro Sánchez endorsed Morocco's proposal. The endorsement reflected an important change in Madrid's policy towards Western Sahara, its former colony, which had been officially neutral on the question of final status.

The statement precipitated the recent break in Algerian-Spanish relations.

An even more extreme position had been taken by Donald Trump. In his last days in office in late 2020, the former US president extended official US recognition of Moroccan sovereignty over Western Sahara. No other North Atlantic power has done so.

The fifth in a series of UN envoys attempted to visit Moroccan occupied Western Sahara for the first time in July 2022 only to be denied access by Rabat.

Thus recent developments between Morocco, Spain, and Algeria should be understood as a more aggressive posture on the part of Algiers to defend its strategic interests vis-à-vis Western Sahara.

The global energy crisis stemming from the war in Ukraine would appear to strengthen its position, as Algeria is Africa's largest exporter of gas.

What remains to be seen is whether Madrid, Paris, Brussels and Washington have got the message yet.