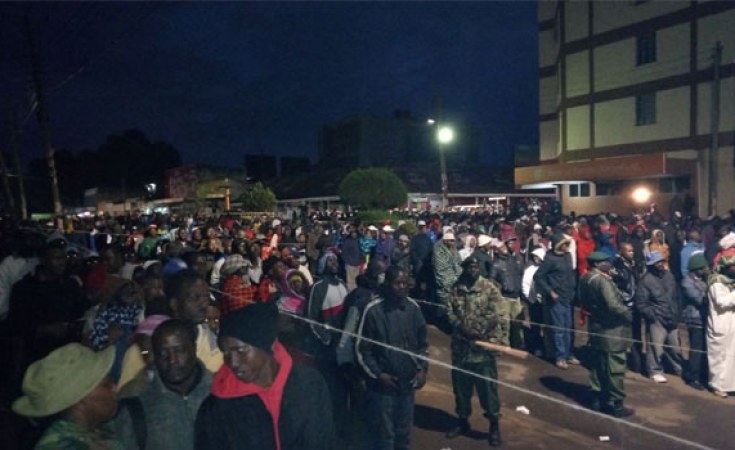 The failure of  Kenyan  authorities to address accountability for past abuses by police heightens the risk of police abuse around the August 9, 2022 general elections, Human Rights Watch said today. Kenya has a history of election-related violence including excessive and unlawful use of force by police, with few, if any, police officers held to account.

Victims' families, activists, government officials, and police officers have expressed concerns about possible violence if the August 9 presidential election results are disputed. In the aftermath of the 2017 elections, Human Rights Watch and other Kenyan and international human rights organizations  documented killings of 104 people by police  and armed gangs, most of the victims being supporters of the then main opposition party, the  National Super Alliance . With just seven days to another general election, Kenyan authorities have yet to take steps to ensure justice for police abuses that characterized the 2017 general elections, or to credibly investigate allegations that police are involved in recent extrajudicial killings.

Between April and June 2022, Human Rights Watch interviewed 26 people, including 15 activists involved in police reform work, 3 police officers, including a deputy commissioner in charge of operations, 1 current and 2 former employees of the Independent Policing Oversight Authority (IPOA, or Oversight Authority), a state-funded civilian police accountability institution, 4 journalists who report on police issues, and a middle level state officer at the national Ministry of Interior and Coordination.

Some of those interviewed attributed the problem of police abuse, including excessive and unlawful use of force as a crowd control tactic during election periods, to the long standing culture of impunity for police abuses. Activists and others said that the failure of the Oversight Authority to carry out its work, especially in recent years, has been a major problem, and that political interference has weakened efforts to prosecute police abuses.

Another problem is the lack of budgetary independence of the police service and the Oversight Authority, which government officials have leveraged to undermine the independence of the two institutions. Kenyan authorities have also undermined the quest for accountability by their actions, including stopping the police vetting process in 2014, reinstating vetted officers earlier fired for their role in abusive practices, and weakening laws enacted over the past decade that aimed to enhance police accountability.

The majority of those interviewed said they were worried that police will respond abusively to violence or public protests around any election results' disputes after the August voting. Several activists expressed concerns that the elections come at a time when the country is experiencing ongoing  extrajudicial killings and disappearances , including those with alleged police involvement. In its  annual report in April 2022 , Missing Voices, a coalition of 15 civil society organizations including Human Rights Watch, documented 219 incidents in 2021 alone; 187 killings by police and 32 enforced disappearances.

Kenyan and international human rights groups,  including Human Rights Watch , have documented  excessive use of force by police , including execution of suspects and innocent bystanders between 2018 and 2020. Even though the identities of some individual officers implicated in the killings are known, Kenyan authorities have done little to end these killings. Kenyan authorities have also failed to investigate reports of  threats by police against activists  calling for accountability.

Current and former employees of the Oversight Authority said that police and other government officials frustrated the authority's efforts to investigate and prosecute officers implicated in the 2017 killings.

One former official said that, despite repeated written requests and a court order during an inquest into one of the killings, the  police have declined to release the operational orders  that were crucial to the authority's ability to identify the officers who did the killing. The current and former officials said that police and other senior government officials intimidated witnesses, shielded errant officers from justice, refused to abide by legal requirements to inform the Oversight Authority whenever a death occurred, and blocked officers from testifying against other officers. One said that allowing police to operate without name tags makes it difficult for victims and witnesses to identify abusers.

Kenyan activists, including Diana Gichengo of Amnesty International Kenya, attribute the persistence of police abuses and continued lack of accountability to, among other things, stalled police reforms. Police reforms had been strongly recommended by various government commissions.

The Commission of Inquiry into the post-election violence of 2007 found that police had raped, looted, and killed at least 405 people, among other abuses, and recommended police reforms to address systemic failures and partisanship within the police as well as some level of civilian oversight.

On May 7, Dominic Kisavi, a deputy police commissioner in charge of operations, told Human Rights Watch that police are not required to provide the information to the Oversight Authority and that the lack of accountability for the 2017 post-election abuses resulted from a lack of a clear command structure among the officers who had been deployed to quell the riots and not from a lack of cooperation by senior officers.

"We have now decided that the formalized units like the General Service Unit will only be deployed when necessary, and they will strictly work under the ground commander when they get deployed," Kisavi said referring to the killings in Kisumu and Nairobi that have largely been blamed on the General Service Unit, who were receiving instructions from Nairobi rather than the ground commander. He said the problems with law enforcement operations in 2017 elections are being addressed as part of preparation for the 2022 election. Further, he said that complying with Oversight Authority requests would depend on whether doing so would compromise operations or undermine national security, a position inconsistent with Kenya's 2011 National Police Service Act, which requires police to cooperate with the authority.

Kenyan authorities should ensure that all police abuses in the 2017 elections, earlier elections, and more generally are thoroughly and credibly investigated, and all the officers found culpable, including for obstructing justice and investigations into police abuse, are held to account in accordance with national law, Human Rights Watch said.

Under the National Police Service Act, lethal force is only justified when strictly unavoidable to protect life, in line with the  United Nations Basic Principles on the Use of Force and Firearms by Law Enforcement Officials . The National Police Service Act also requires police officers who use lethal fire to report to their immediate superior, explaining the circumstances that necessitated the use of force.

Kenyan security forces should abide by all aspects of the UN basic principles, which stipulate that law enforcement officials should use nonviolent means and use firearms only in extreme cases that involve an imminent threat of death and serious injury, when other less extreme methods are insufficient. The basic principles also require governments to ensure that arbitrary or abusive use of force and firearms by law enforcement officials is punished as a criminal offense.

On June 28, a Human Rights Watch team, led by Executive Director Kenneth Roth, met with William Ruto, incumbent deputy president and a 2022 presidential candidate, and Martha Karua, the running mate of Raila Odinga, another presidential candidate. Both promised to resolve any disputes that may arise out of the upcoming elections through the courts and pledged to continue to discourage their supporters from engaging in violence.

"Kenyan authorities need to do more to preserve the independence of the police and investigative bodies, and ensure that law enforcement operations, elections related or otherwise, are guided by national and international law," Namwaya said. "An accountable police service that upholds the law and protects the public from violence is in Kenya's interest."

Concerns Over Possible Violence if Presidential Poll is Disputed

Next Story
Tagged:
Copyright © 2022 Human Rights Watch. All rights reserved. Distributed by AllAfrica Global Media (allAfrica.com). To contact the copyright holder directly for corrections — or for permission to republish or make other authorized use of this material, click here.